ST. LOUIS – (August 14, 2019) Soon, developers will be asked to submit proposals to build new homes on 43 parcels that Saint Louis University owns in Gate District West near its medical center. But in an unusual move for urban redevelopment projects, it won’t be SLU that’s leading the effort. 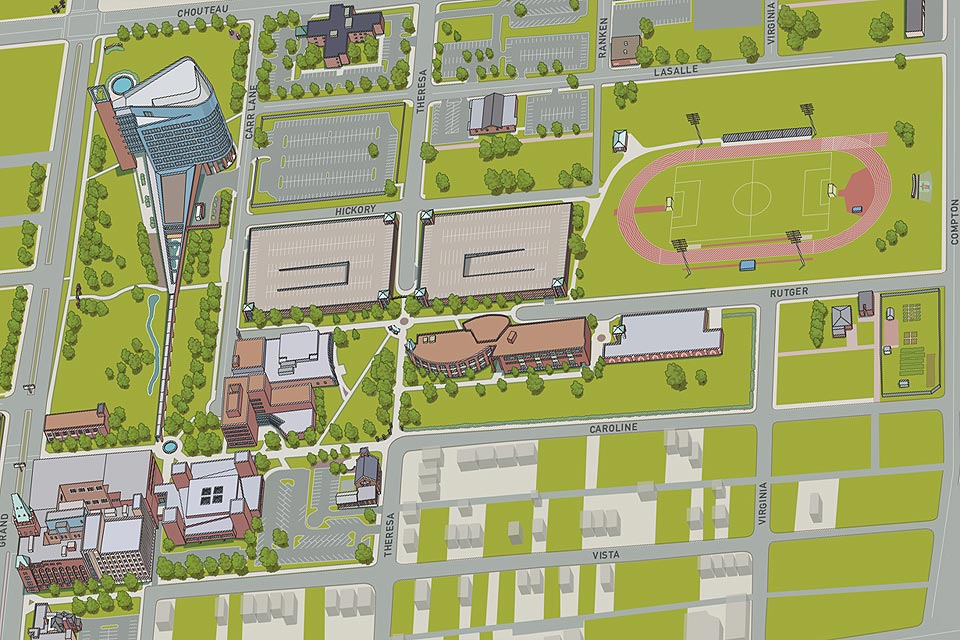 As indicated on the map, most of SLU’s health sciences education and research buildings are located in Gate District West, which is bordered by Grand Boulevard to the west, Compton Avenue to the east, Chouteau Avenue to the north and Interstate 44 to the south.

While SLU will be closely involved in the process, the neighborhood association’s development committee will issue the RFP and select a developer or developers to acquire the properties and construct new homes on them.

The construction will fall under a community benefit agreement that the University adopted last year to promote participation from minorities and women in building projects.

Gate District West is bordered by Grand Boulevard to the west, Compton Avenue to the east, Chouteau Avenue to the north and Interstate 44 to the south. More than 80 percent of the neighborhood’s residents are African-American. The neighborhood features a mix of owner-occupied and rental housing.

Most of SLU’s health sciences education and research buildings are located in Gate District West, including its medical and nursing schools, as well as its Doisy College of Health Sciences, Center for Advanced Dental Education and College for Public Health and Social Justice.

“We’re proud to be in Gate District West, where we live out our mission in significant ways,” said University President Fred P. Pestello, Ph.D. “This partnership exemplifies SLU’s commitment to building and strengthening relationships with our neighbors.”

Gate District West falls within a 400-acre area where the St. Louis Midtown Redevelopment Corporation – a joint effort of SLU and SSM Health – oversees all development and construction projects.

After being formed in 2017, the redevelopment corporation worked with 19th Ward Alderwoman Marlene Davis to re-establish the Gate District West Neighborhood Association. After a few years of inactivity, the association now has a board, bylaws and several committees.

Davis co-sponsored the legislation authorizing the redevelopment corporation. For more than a decade, she has helped shepherd the cooperative efforts that have led to the boom taking place in Midtown. She said she supports the approach to seek new housing in Gate District West.

“As alderwoman, it gives me pleasure to see residents taking decision-making positions and collaborating to ensure sustainability and future growth by having a seat at the table,” Davis said.

The president of the neighborhood association, Patrick Adegboyega, M.D., called it an “exciting time” for Gate District West and Prospect Yards, one of the city’s newest districts, which encompasses much of the redevelopment area.

“SLU has been an incredible partner in supporting our neighborhood and continues to actively engage with the Gate District West residents in collaborative discussions about ongoing, as well as prospective, projects in the area,” Adegboyega said. “We look forward to the addition of new homes in our blossoming neighborhood.”

In addition to issuing the RFP for new housing in the neighborhood, the association’s seven-member development committee will also review and approve the new homes’ design, as well as the materials that will be used for the houses.

“SLU is a fantastic neighbor,” added Paul Carter, the development committee’s chair. “They are engaged with the community and are providing an opportunity for the neighborhood to voice their opinion on the redevelopment taking place in Gate District West. It’s a great partnership.” 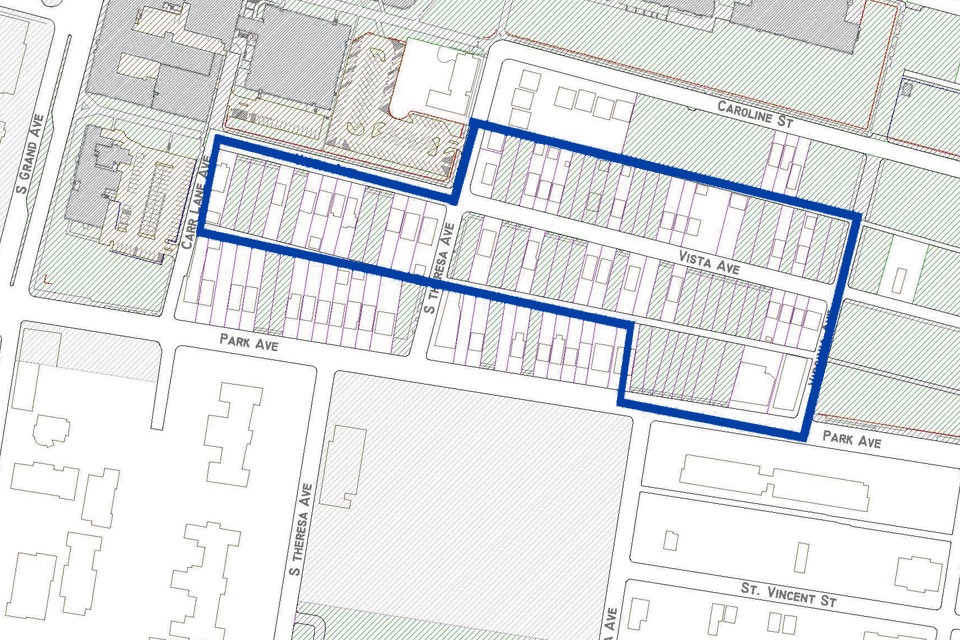 A map showing the area in Gate District West where SLU owns 43 parcels.