ST. LOUIS (Dec. 13, 2019) – Ameren Missouri has donated a 2.1-acre parcel in the city valued at $1 million to Saint Louis University in support of the development boom that SLU is helping lead in Midtown St. Louis. The two organizations closed on the transfer of the property – located near SLU’s Medical Center – this week. 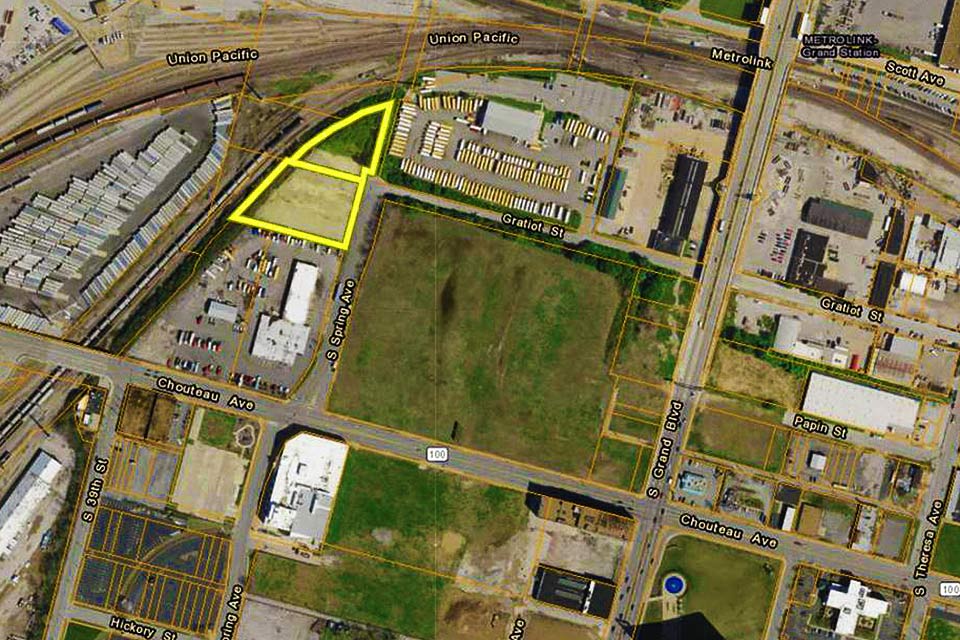 The satellite map above shows the 2.1-acre parcel that Ameren is donating to SLU.

The parcel once housed an electrical substation but in recent years has been used for material storage. Ameren Missouri decommissioned the site after investing in a modern $36 million substation near the Grand MetroLink Station to ensure high reliability for the downtown, Midtown and Central West End areas of the city.

“That’s why we are making this gift,” Lyons continued. “SLU has the right vision so that one day this vacant property can be put to a use that complements the redevelopment activity that has and will continue to transform Midtown St. Louis.”

Saint Louis University President Fred P. Pestello, Ph.D., said the University is honored that Ameren Missouri recognizes SLU’s commitment to improving the city and the region, and has entrusted SLU with transforming the property it has donated into something that will enhance the vibrancy of Midtown St. Louis.

“Through its commitment to enhancing the communities it powers, Ameren Missouri quite literally makes our region a brighter place to live, learn and work,” Pestello said. “On behalf of everyone at Saint Louis University, I want to thank Ameren Missouri for its generous gift. We are grateful that an organization so integral to the success of the region shares our vision for revitalizing Midtown St. Louis.”

While no immediate plans for the parcel have been made, it falls within the 400-acre area where development is controlled by the St. Louis Midtown Redevelopment Corp., a joint effort between the University and SSM Health to encourage investment around their educational and medical campuses.

The site also is adjacent to the 14 acres at the corner of Grand Boulevard and Chouteau Avenue that SLU is selling to Cullinan Properties for a planned mixed-use development called Iron Hill that will include a hotel, apartments, retail space and restaurants.

Ameren Missouri’s gift comes at a time when nearly $1 billion is being invested in Midtown St. Louis. In addition to Iron Hill, the new $550 million SSM Health Saint Louis University Hospital is set to open next year, and work is underway on the $220 million first phase of the City Foundry and the $55 million Armory project.

Corporate donations like Ameren’s are an important part of the University’s $500 million fundraising campaign. To date, SLU has raised more than $360 million for Accelerating Excellence: The Campaign for Saint Louis University, completing its most successful fundraising year in history in fiscal year 2019.

Ameren has been a supporter of SLU for more than 40 years, committing more than $5 million to support student scholarships, sponsored research, diversity initiatives and community engagement activities, among other priorities.

Additionally, more than 230 SLU alumni identify as Ameren employees, and the company is one of the top clients of the University’s Workforce Center, which offers technology training services and professional development solutions.

Ameren Missouri has been providing electric and gas service for more than 100 years, and the company's electric rates are among the lowest in the nation. Ameren Missouri's mission is to power the quality of life for its 1.2 million electric and 127,000 natural gas customers in central and eastern Missouri. The company's service area covers 64 counties and more than 500 communities, including the greater St. Louis area. For more information, visit Ameren.com/Missouri or follow us on Twitter at @AmerenMissouri or Facebook.com/AmerenMissouri.