Saint Louis University professor Raymond Tait, Ph.D., acting chair in the Department of Psychiatry and Behavioral Neuroscience in the School of Medicine, has been recognized by the American Pain Society (APS) for his achievements in advancing the clinical study of pain. 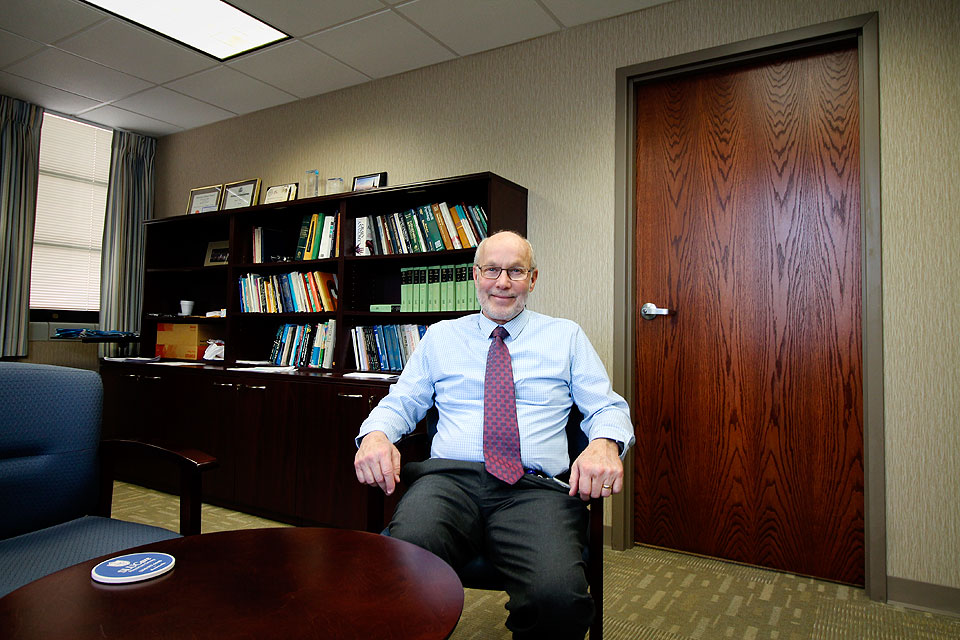 A SLU faculty member since 1982, Professor Raymond Tait, Ph.D., has a 40-year career in which he has served as a pain researcher, clinician and program administrator. Photo by Ellen Hutti

Tait will receive the society’s 2019 Wilbert E. Fordyce Clinical Investigator Award in April at the society’s national meeting in Milwaukee, Wisconsin. Established in 1995, the Fordyce Award recognizes and honors career achievements in the field of clinical research on pain.

Tait became interested in the science of pain during a fellowship at the University of Virginia in the late 1970s where he worked under field pioneers Harold Carron, M.D., and Doug Degood, Ph.D.

“I was struck by the degree to which clinical decisions hinged on a provider’s assessment of contributing psychosocial factors,” Tait said. “As a psychologist, I also enjoyed the degree to which patients needed coaching, rather than more traditional forms of psychotherapy.”

Tait partnered in much of his research with John Chibnall, Ph.D., a SLU alumnus and former professor of psychiatry in the School of Medicine. The pair’s research collaboration has lasted more than 30 years, during which time they have developed assessment tools, examined treatment outcomes, investigated treatment disparities, and studied numerous factors that impact clinical judgments of pain, a line of study that the two continue to pursue.

“The field has given me the gift of issues that challenge me daily,” Tait said. “One of my favorite work activities involves the analysis of data, especially when the data lead to the question, what next? My other favorite activity involves how I like to approach research – collaboratively. It is great fun to sit down with a colleague like John, to generate hypotheses that could explain observations, to build protocols that test those hypotheses, and to edit each other’s work mercilessly.”

“Having a collaborator,” he continued, “also helps to prioritize research when other issues are nipping at your heels.”

A SLU faculty member since 1982, Tait has a 40-year career in which he has served as a pain researcher, clinician and program administrator. In 1982, Tait founded the School of Medicine’s first chronic pain treatment program, a program that approached pain through a multidisciplinary lens. He also has served as chair of SLU’s Institutional Review Board (IRB) and has held a variety of other research leadership roles for the University. He serves as a member of the editorial board for Pain Medicine, Psychological Injury and Law, Pain, International Journal of Pain and the Journal of Pain, and as a reviewer for multiple journals in the field.

He has received numerous grants from the NIH and other funding agencies. He currently is part of a team that received a $1.55 million grant from the Chess Club and Scholastic Center of Saint Louis to study the possible links between chess and protecting against memory loss.

Recently, he has been studying factors that account for diverging patient and provider expectations in pain treatment and that may influence providers’ clinical judgments. He is actively engaged in research with colleagues in a Center of Excellence in Pain Education at Southern Illinois University Edwardsville and is collaborating in research aimed at enhancing emergency departments’ management of pain patients at risk for opioid misuse.