Showcase Your Spirit By Contributing to SLU's #ArchCityReligion Photo Burst

Share your photos of where you see and feel religion in the St. Louis area with Saint Louis University's Lived Religion in the Digital Age project. The project directors invite people of all ages and identities to submit original photographs of religion in St. Louis for the #ArchCityReligion community photo burst. 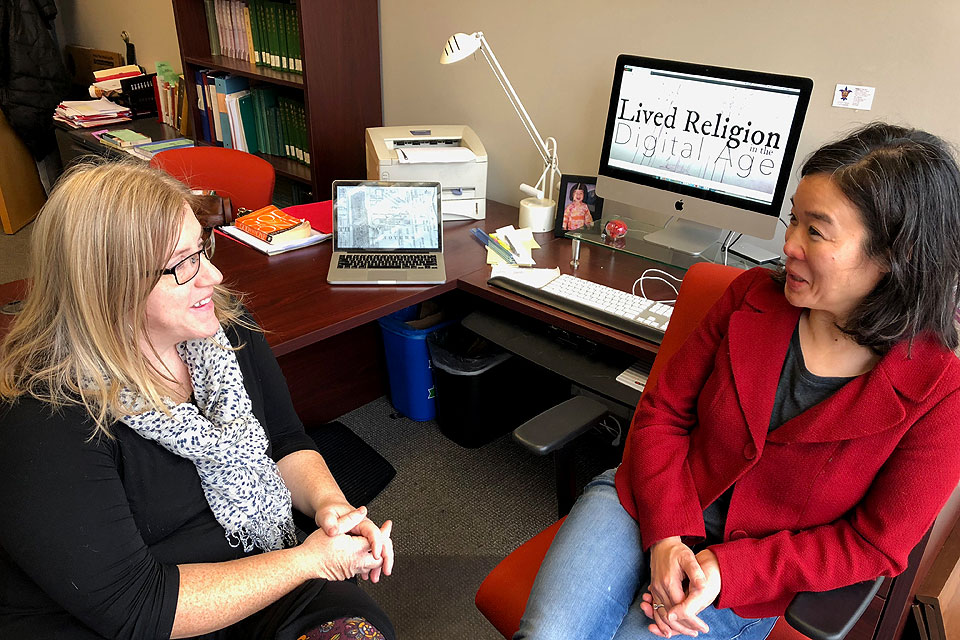 From left, Rachel Lindsey, Ph.D., assistant professor, and Pauline Lee, Ph.D., associate professor, both in SLU’s Department of Theological Studies, were highlighted in STLMade for their digital mapping of religious life in St. Louis. Photo by Amelia Flood.

With a $400,000 grant from the Henry Luce Foundation, Lindsey and Lee are exploring where people experience religion in the St. Louis region and are in the process of creating a digital map and database to show what they’ve found. While the map will include churches, mosques, temples and other houses of worship, it will also feature places and public art that isn't usually considered within a religious perspective.

The project asks people to think outside the box and relinquish specific definitions of religion to delve into details of lived experience. The findings will be available to the public on a web site created by SLU’s Walter Ong, S.J., Center for Digital Humanities.

The researchers want to know about objects, spaces, practices, food, music, and personal history, among other potential topics. These questions will yield a description of each place, and help paint a picture of its connection to a faith tradition, the city itself, and, ultimately, what religion means in St. Louis and to St. Louis.

“What does religion look like to you? Taste like? Smell like?” Lee asked. “What are people doing to live their religion? That is some of what we are seeking to map out.”

That map includes brick and mortar churches, mosques, temples and synagogues, but it will also feature places where people live their religion outside of a place of worship as well as closer scrutiny to how religion is woven into local cultures, regardless of personal faith traditions.

The Lived Religion project was highlighted by the STLMade movement, which tells stories about the people and places that lend vibrancy and character to St. Louis.

Lindsey and Lee are seeking submissions of original digital photographs of religion in St. Louis. Contributing photos should illustrate where the photographer sees (or hears, smells, touches, or tastes) religion in their daily life. From collective rituals to private devotions to public spectacles, law, art, sports, and entertainment, how is religion part of the experience of living in St. Louis.

All submissions are welcome and will help the researchers better understand what and where religion is and does in the greater St. Louis area.

To participate, submit an original photograph in one of five categories: SPACES, SENSES, WORDS, THINGS, or PRACTICES. By submitting a photograph, you grant Saint Louis University the irrevocable right to reproduce, distribute copies, and publicly display your photo. All submissions will be archived and preserved for research and educational purposes. A selection of photo burst submissions will be featured in an online gallery and may be selected for public display in a local gallery.

Contribute to the Photo Burst

Participation in the photo burst is voluntary and contributes to the study by increasing understanding of religious practices, ideas, places, and experiences. Please direct inquiries to livedreligion@slu.edu.