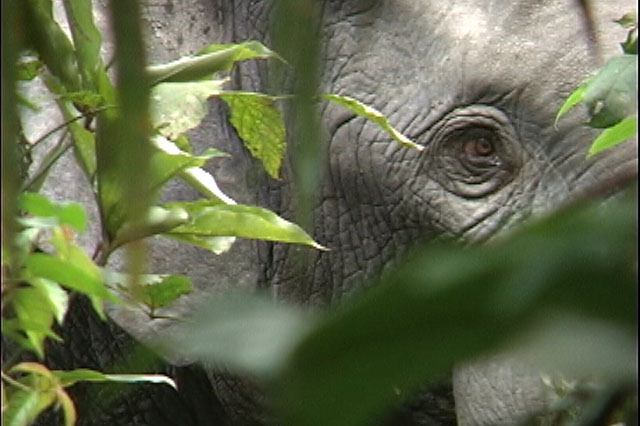 One of the last remaining megaherbivores, forest elephants shape their environment by serving as seed dispersers and forest bulldozers as they eat over a hundred species of fruit, trample bushes, knock over trees and create trails and clearings. Their ecological impact also affects tree populations and carbon levels in the forest, researchers report, with significant implications for climate and conservation policies.

In a paper recently published in Nature Geoscience, a Saint Louis University biologist and his colleagues found that elephant populations in central African forests encourage the growth of slow-growing trees with high wood density that sequester more carbon from the atmosphere than fast growing species which are the preferred foods of elephants.

As forest elephants preferentially browse on the fast growing species, they cause high levels of damage and mortality to these species compared to the slow growing, high wood density species. The collapse of forest elephant populations will likely therefore causes an increase in the abundance of fast growing tree species at the expense of slow growing species, and reduce the ability of the forest to capture carbon. 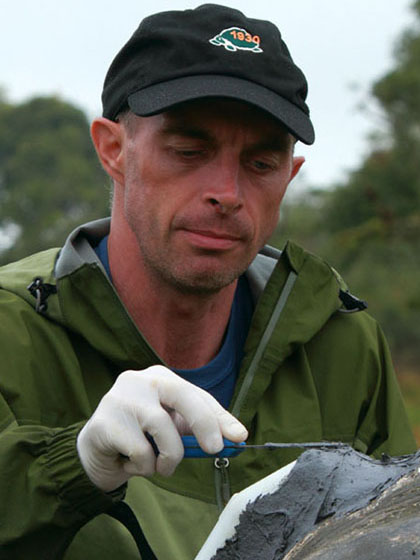 Stephen Blake, Ph.D., assistant professor of biology at Saint Louis University, spent 17 years in central Africa doing, among other things, applied research and conservation work with elephants. While there, he collected a data set on forest structure and species composition in the Nouabalé-Ndoki Forest of northern Congo.

In the current study, Blake’s collaborators developed a mathematical computer model to answer the question ‘What would happen to the composition of the forest over time with and without elephant browsing?’

To find out, they simulated elephant damage through browsing in the forest and assumed they browse certain plant species at different rates. Elephants prefer fast-growing species in more open spaces. As they feed and browse, they cause damage, knocking off a limb or breaking a shrub. The model calculated feeding and breakage rates along with elephant mortality rates to see their effect on certain woody plants.

“Lo and behold, as we look at numbers of elephants in a forest and we look at the composition of forest over time, we find that the proportion of trees with high density wood is higher in forests with elephants,” Blake said.

“The simulation found that the slow-growing plant species survive better when elephants are present. These species aren’t eaten by elephants and, over time, the forest becomes dominated by these slow-growing species. Wood (lignin) has a carbon backbone, meaning it has a large number of carbon molecules in it. Slow growing high wood density species contain more carbon molecules per unit volume than fast growing low wood density species. As the elephants “thin” the forest, they increase the number of slow-growing trees and the forest is capable of storing more carbon.”

People love elephants – we spend millions every year on cuddly toys, they are zoo favourites and who didn’t cry during Dumbo? and yet we’re pushing them closer to extinction every day.

These findings suggest far-ranging ecological consequences of past and present extinctions. The loss of elephants will seriously reduce the ability of the remaining forest to sequester carbon. Trees and plants use carbon dioxide during photosynthesis, removing it from the atmosphere. For this reason, plants are helpful in combating global warming and serve to store carbon emissions.

Without the forest elephants, less carbon dioxide will be taken out of the atmosphere. In monetary terms, forest elephants represent a carbon storage service of $43 billion.

“The sad reality is that humanity is doing its best to rid the planet of elephants as quickly as it can,” Blake said. “Forest elephants are rapidly declining and facing extinction. From a climate perspective, all of their positive effect on carbon and their myriad other ecological roles as forest gardeners and engineers will be lost.”

The study authors note that forest elephant conservation could reverse this loss.

“Elephants are a flagship species. People love elephants – we spend millions every year on cuddly toys, they are zoo favourites and who didn’t cry during Dumbo? and yet we’re pushing them closer to extinction every day. On one hand we admire them and feel empathy and are horrified when they are murdered and on the other hand we’re not prepared to do anything serious about it. The consequences may be severe for us all. We need to change our ways.

“Besides, it just makes good sense to keep them around. They’re doing an amazing job of helping the planet store carbon for free.”