Saint Louis University has announced that Robert Cardillo, former director of the National Geospatial-Intelligence Agency (NGA), has been named a Distinguished Geospatial Fellow in the Saint Louis University Research Institute. Cardillo, who will remain based in Washington D.C., has agreed to devote a portion of his time each month to his work for SLU. This assignment begins on June 1. 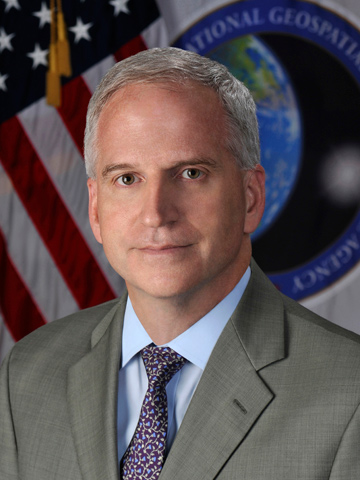 “During my first conversation with Director Cardillo, his passion for collaboration and affinity for Jesuit education became clear,” said Fred P. Pestello, Ph.D., president of Saint Louis University. “From that moment on, we began generating a list of opportunities that could utilize Robert’s expertise and help build upon the growth and dynamism in the region, which is propelled by NGA West.”

In his new role at SLU, Cardillo will support an ongoing strategy for geospatial growth in St. Louis; enhance the first-class education of SLU students; and facilitate collaborations between the University, local innovators, industry leaders and the NGA. Cardillo also will provide guidance to GeoSLU, SLU’s geospatial research, training, and innovation initiative.

In addition, Cardillo will advise the Cortex Innovation Community on geospatial strategy, innovation and commercialization, further strengthening an already rich partnership between the University and the neighboring innovation hub.

“I could not be more excited to join the world-class professionals at Saint Louis University.” Cardillo said. “As the geospatial momentum grows in St. Louis, I look forward to advancing both SLU’s contributions and their interdependence with local, regional and national partners.”

The mission of the Saint Louis University Research Institute will continue to propel SLU down the path to becoming a preeminent Jesuit research university. Founded through a $50 million gift from Dr. Jeanne and Rex Sinquefield — the largest gift in University history — one of the Research Institute’s key priorities is building areas of distinctive research strength.

“Robert Cardillo’s appointment will accelerate our faculty’s ambition to establish SLU as a world-class destination for geospatial research, training and innovation,” said Kenneth Olliff, the University’s vice president for research and director of the SLU Research Institute. “Robert will also play a critical role in building partnerships between SLU and the growing regional and national geospatial ecosystem — with our St. Louis innovation partners, Cortex and T-Rex, and with the NGA and other federal agencies, industry and other leading universities.”

Cardillo is a highly respected leader in the U.S. Intelligence Community. He previously held senior positions in the Bush and Obama administrations and most recently served as the sixth director of the NGA, a position from which he selected North St. Louis as the home of the agency’s planned $1.75 billion campus. He retired from that position in February 2019.

“During his tenure leading at the NGA, Robert earned a well-deserved reputation for leading a cultural shift that embraced external partnerships and technological innovation,” Hall continued. “His new appointment with SLU brings that vision and network of global relationships to St. Louis and will strengthen our region as the undisputed center of excellence for this rapidly growing industry sector.”

Cardillo arrives at SLU at a transformative moment for geospatial science and research. In January 2019, SLU and the NGA announced a new partnership to promote geospatial research and technology. In April 2019, SLU and the NGA co-sponsored “GeoResolution: The 21st Century Geospatial Ecosystem,” a new conference that brought together government, academic and industry partners who are growing the geospatial ecosystem in the greater St. Louis region. Cardillo’s appointment expands upon this work.

Cardillo earned a master’s degree in national security studies from Georgetown University and a bachelor’s degree in government from Cornell University. In May 2019, he received an honorary Doctor of Humane Letters from Saint Louis University.