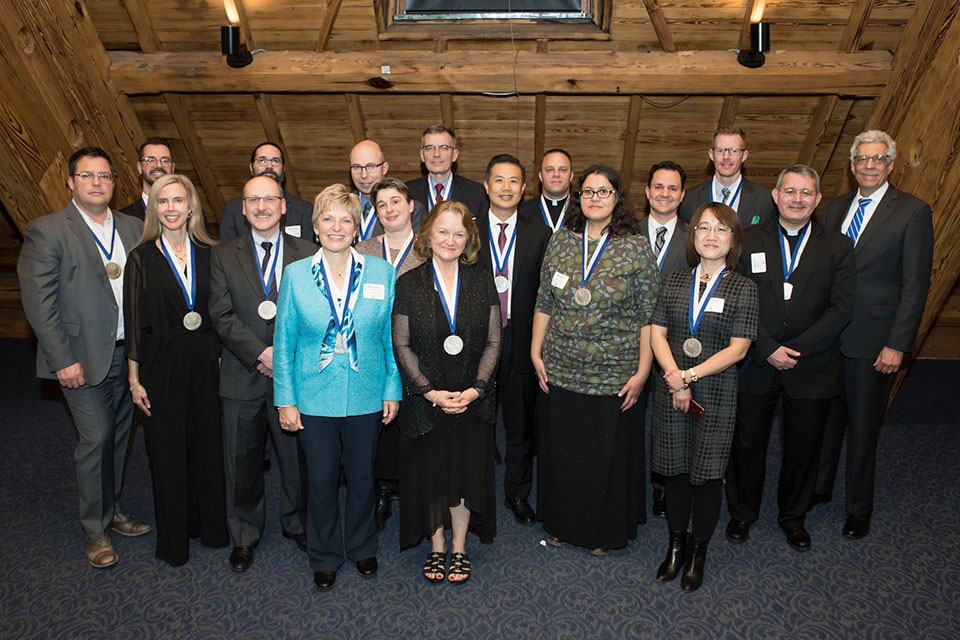 “With this event we honor our generous donors and the top scholars they support,” University President Fred P. Pestello, Ph.D., said. “Through the generosity of our friends and alumni, we are able to hire and support faculty who are advancing the frontiers of knowledge and transmitting that knowledge to the next generation, who are about to go out into the world as men and women for and with others.”

Awarded to faculty with a record of scholarship, teaching and service that places them among the best in their field, endowed chairs and professorships serve to further enrich Saint Louis University’s academic enterprise.

The Nov. 13 ceremony celebrated first-time investitures as well as re-investitures of previously filled positions held within four of SLU’s 11 schools and one of the University’s two degree-granting centers.

Attracting world-class faculty like those honored at the investiture ceremony is a key goal of Accelerating Excellence: The Campaign for Saint Louis University. The historic $500 million fundraising effort aims to propel SLU to national prominence as a world-class research institution by committing resources to academic excellence, scholarships, health sciences, business education and athletics.

The generosity of donors like those recognized during the investiture ceremony make such strides possible, explained Interim Provost Chester “Chet” Gillis, Ph.D.

“Teaching and scholarship are at the heart of what we do,” Gillis said. “These professors whom we honor represent our most distinguished faculty. Their scholarship enhances the reputation of the University nationally and internationally, and their interaction with students inspires the next generation of scholars and leaders. This is only possible with the generous support of donors, whose names are now in the title these professors bear.”

Learn More About The Honorees and Their Endowed Positions