For Saint Louis University senior Christina Connell, flying is the family business, one she is eager to join when she graduates. Both of her parents have flown as commercial pilots, an aunt flies her own single engine plane, and her paternal grandparents were both licensed pilots. 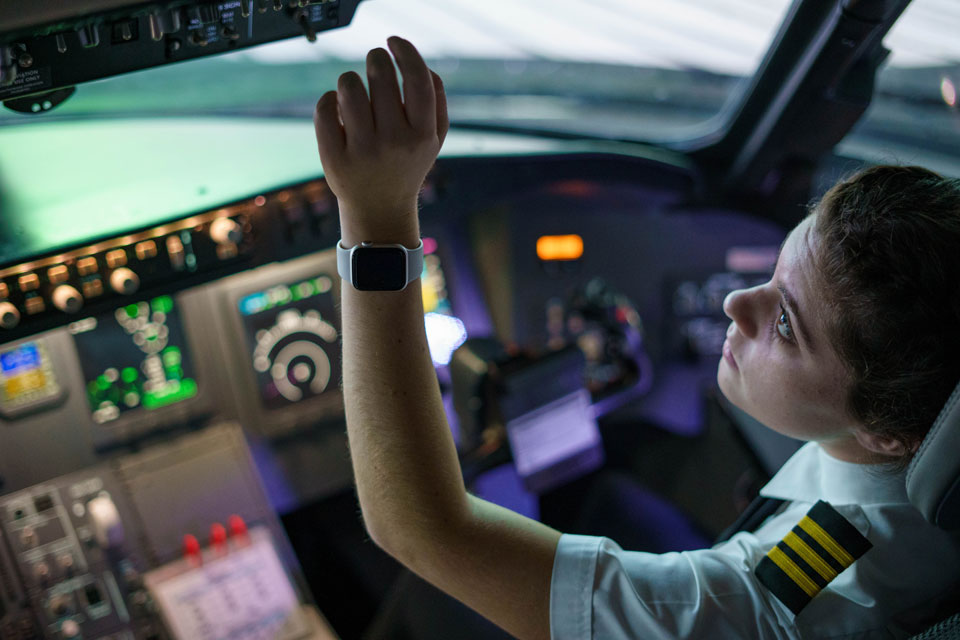 SLU senior Christina Connell dreams of flying alongside her mother as a pilot for United Airlines. Her father recently retired from United after 25 years as a captain flying B757s. Here she prepares for a session in SLU's flight simulator. Photo by Steve Long

Now majoring in aeronautics and flight science in Parks College of Engineering, Aviation and Technology, Connell said she's found her wings, in more ways than one, at SLU.

"I grew up in the industry," Connell said. "I often and honestly tell people that coming to this school was one of the best decisions of my life."

"I was looking for a university that was Jesuit, that had an aviation program and a nursing program," she continued. "To my surprise, there was only one university in the whole country that fit: SLU and Parks."

Part of the Parks College legacy of supporting women in aviation, Connell shares her dreams as a woman in aviation and as a Billiken who found a community that embraced her and nurtured her ambitions to seek out a career above the clouds.

Learn About SLU's Legacy of Supporting Women in Aviation

Tell us about your career ambitions.

After college I plan on being a flight instructor at nearby flight schools until I fly enough hours to apply to become a commercial airline pilot at the regional level.

I estimate it will take me about two years to get to that point. After regionals, I want to fly at United Airlines with my mom.

Flying seems to be in your blood. Can you tell us about how you decided to pursue aviation?

My mom is a current A320 captain at United Airlines and my dad worked there for 25 years as a B757 captain, but retired in October of 2018.

My mom's sister owns a single engine airplane and flies that at her leisure.

Surprisingly, I wasn’t actually interested in becoming a pilot until I was 16 years-old and I took my first flight lesson in a four-seat, single engine aircraft. Luckily, at that point I was a junior in high school and was beginning my college search.

What have some of your best memories been of studying aviation at SLU?

I love my classes, my classmates - most are male - are very supportive and inclusive, and the environment that the college creates.

What are your biggest takeaways from studying at SLU?

Three years ago, I decided to move across the country all by myself to go to a school with literally no one I knew. Looking back I’m happy I wasn’t as terrified as that sounds.

I adjusted well, I learned quickly I had to make all my own decisions, but I also enjoyed being able to make my own schedule.

My college experience has been at times a struggle, but a huge learning experience about me growing into the adult I want and need to be to become a fully functioning adult and professional pilot.

How does Parks College's history inspire you today?

I have actually seen an old antique Park’s College advertisement that said, “Park’s College: Where young men go to learn to fly.” After attending an all girl Catholic high school, my parents joked that I went from an all girl school to an all boy school. So according to history, I was not really expected to be here.

But there is a pretty cool photo at the end of the hall way in McDonnell Douglas Hall of Amelia Earhart working on her aircraft at our hangar in Cahokia. It's remarkable that such a pioneering female aviator, aka “aviatrix”, visited my school so long ago.

Nationally, 7% of pilots are female, so to see our numbers are up there in a leading aviation university, it is very promising for the future of our industry.

How are you using the skills you've learned in SLU's classes to help other young women see aviation as a career worth pursuing?

I am involved with Alpha Eta Rho-Pi, our professional business aviation fraternity chapter on campus. I am the events coordinator for that organization and serve the members in creating fun events, tours, and opportunities to bond with one another.

I am also the president of the Women in Aviation chapter on campus.