A Billiken Ventures Into the Skies: Riya's Story 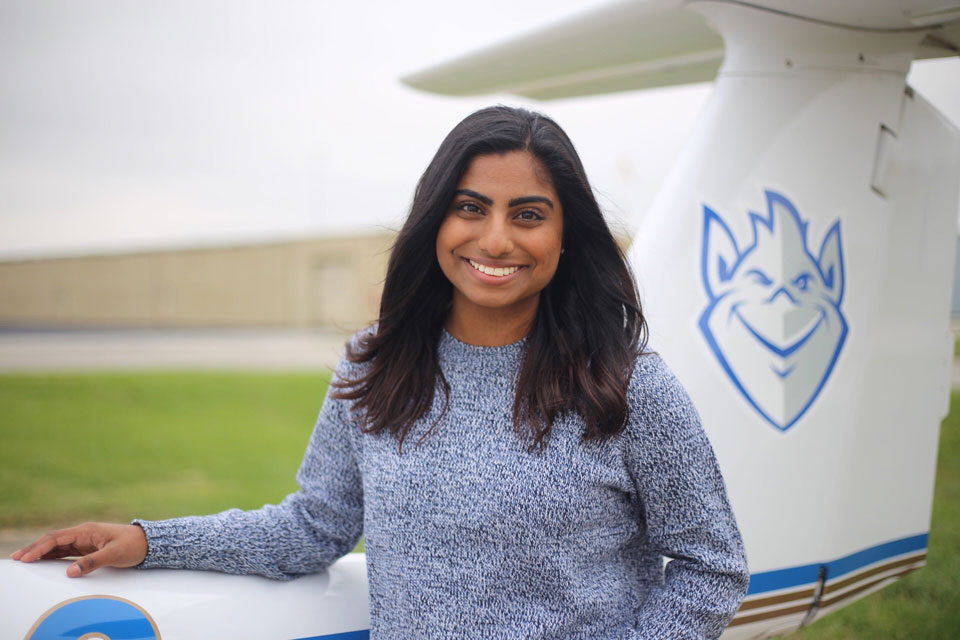 Stepping out of her comfort zone to take to the skies on a discovery flight at age 16, she embraced the rush she felt and has pursued her passion for flight as a student at Saint Louis University's Parks College of Engineering, Aviation and Technology.

Now majoring in aeronautics with a concentration in flight science, Srambichira hopes to become a commercial pilot and to fly for an airline after graduation. When not in the air or in the classroom, Srambichira is active in the Indian Student Association (ISA) and is involved with Alpha Eta Rho Pi, the University's aviation fraternity. She also serves her fellow students as a resident advisor in the Marchetti Towers.

Part of the Parks College legacy of supporting women in aviation, Srambichira shares her experience as a woman in aviation and as a Billiken embracing a Jesuit education to inspire other women to explore careers above the clouds.

Learn About SLU's Legacy of Supporting Women in Aviation

What drew you to study aviation?

Growing up, I was not exposed to aviation other than traveling on airplanes for family vacations. I experienced a culture where girls were not always encouraged to venture into and pursue careers in aviation. I like to say that it was my fascination and the desire to step out of my comfort zone that drew me to this field.

When I was 16 years old, I took a discovery flight and the experience was almost life-changing. No words can really describe the rush you feel when taking the flight controls for the first time.

Why did you choose to study at Parks?

In the summer of 2016, I attended the Parks Aviation Summer Academy. This week-long camp consisted of hands on activities such as piloting flight simulators, learning how to preflight an aircraft, campus tours, and even a discovery flight.

Experiencing a glimpse of what Parks had to offer and exposure to the school’s beautiful campus made me decide that SLU was where I wanted to continue my education.

What have your most memorable experiences been while studying at SLU?

My most memorable experiences have been in my flight training, like doing my first solo flight and  getting to watch myself grow into a better pilot each day.

I have also met some of my best friends through aviation and expanded my network through my participation in several clubs and organizations around campus.

How do you see your personal story fitting in with SLU’s larger history of aviation and its legacy of supporting women in aviation?

Women hold a very small percentage of the pilot population. To me, pursuing this career means more than just becoming a pilot.

With the knowledge and lessons that SLU has provided me, I aspire to be a role model to other young women that want to step out of their comfort zone and venture into the aviation field.

How do you see your time at SLU in the aviation department helping you become the person that you want to be long term?

My time at SLU has been focused on developing the whole person, instead of just making me a competent aviator.

Being at SLU, I understand the value of my profession in terms of connecting the world through aviation. The program has greatly contributed to my overall professional development, such as decision making, effective team working abilities and valuable communication skills.

How do you see aviation as connected to SLU's Jesuit mission and values?

The aviation program is connected to SLU’s mission because it educates future aviation professionals and leaders who will be directly involved with connecting the world as well as serving humanitarian needs.