Were Hot, Humid Summers the Key to Life’s Origins? 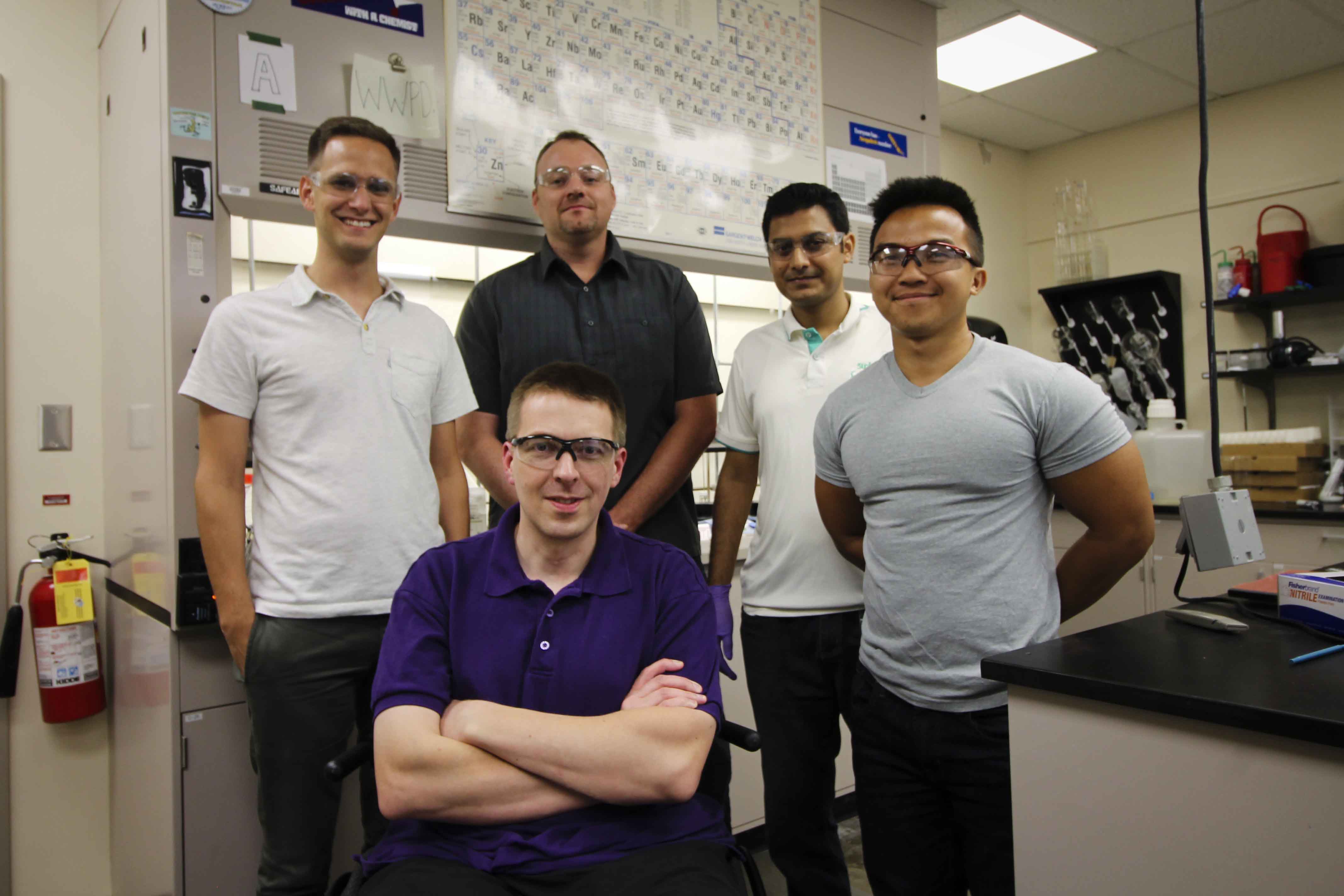 Paul Bracher, Ph. D., assistant professor of chemistry at Saint Louis University and principal investigator of the study, with his research team. Photo by Ellen Hutti.

ST. LOUIS — Uncovering how the first biological molecules (like proteins and DNA) arose is a major goal for researchers attempting to solve the origin of life.

Today, chemists at Saint Louis University, in collaboration with scientists at the College of Charleston and the NSF/NASA Center for Chemical Evolution, published a study in the journal Nature Communications that suggests deliquescent minerals—which dissolve in water they absorb from humid air—can assist the construction of proteins from simpler building blocks during cycles timed to mimic day and night on the early Earth.

“In terms of the history of the planet, how life originated is probably the greatest scientific question we can ask,” said Paul Bracher, Ph.D., assistant professor of chemistry at Saint Louis University and principal investigator of the study. “A key piece of this grand challenge is figuring out how big polymer molecules we know to be important for life could have formed before all of our biological machinery evolved to make them.” 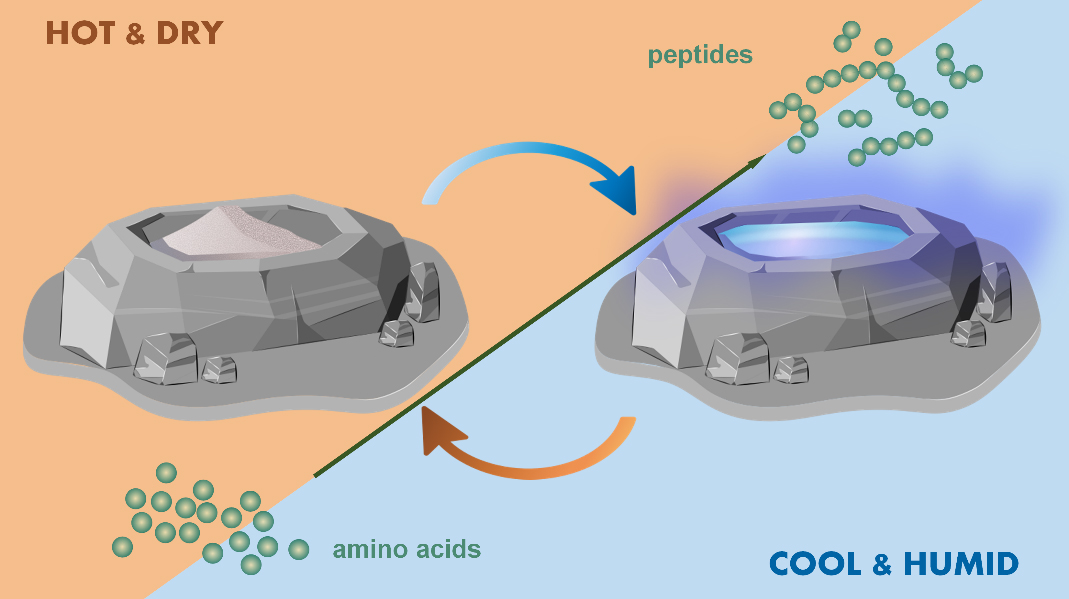 A new study from the NSF-NASA Center for Chemical Evolution reports a possible model for how biological polymers may have formed during the origin of life on Earth. Credit: Bracher Lab, Saint Louis University.

Baking Proteins in the Prebiotic Kitchen

Amino acids are the molecular building blocks linked together by peptide bonds to form proteins. Chemists have long known that simply baking mixtures of amino acids to dryness will lead to the formation of peptide bonds. The yields of peptides improve when water is added and the sample is dried again, after the ingredients are allowed to re-mix. Subjecting amino acids to repeated wet–dry cycles could have been a good recipe for cooking up peptides and proteins on the early Earth, as hot sunny days interrupted by the occasional rainstorm seem like reasonable weather patterns. But a major criticism of this process is its reliance on unpredictable storms that may have watered-down the ingredients to excess. 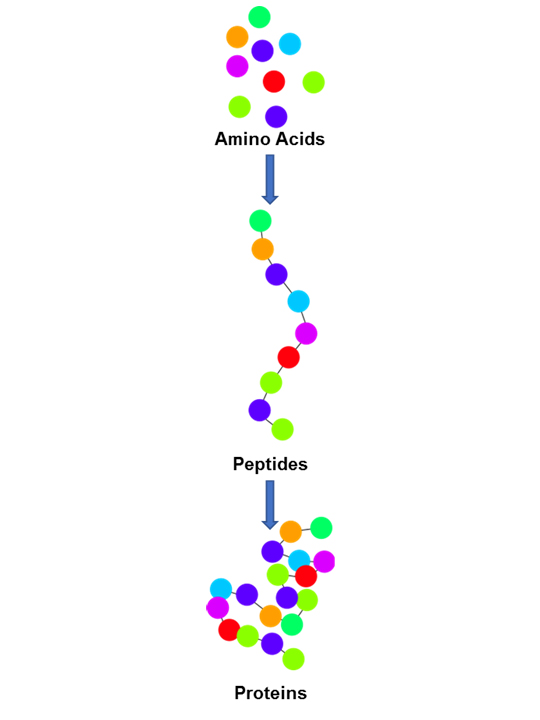 Water: A Necessary But Problematic Ingredient

“Follow the water” has been NASA’s motto in the search for life outside our planet. Without water, the biochemistry of life as-we-know-it would be impossible.

In origin-of-life chemistry, the solution is often the problem. For constructive chemical processes to occur, the building blocks must dissolve in a liquid solution to find partners to react. On Earth, this medium is water, the solvent of life.

However, water can be a double-edged sword. While life needs water to survive, too much water can be destructive. Most biological molecules are prone to hydrolysis, a process in which water breaks apart chemical bonds. And too much water will eventually flood developing cells that contain the evolving biomolecules, strewing them too far away from each other to react.

A Pinch of Salt

Deliquescent minerals offer a means to side-step the limitations of traditional wet–dry cycling. These salts absorb a limited amount of water from the air, based on the relative humidity, offering natural regulation of the water present in a solution.

The new study—a collaboration between scientists at SLU and the College of Charleston—reports how deliquescent salts can assist making peptides from the simplest amino acid, glycine, during self-regulated, repeating wet–dry cycling. During the day, the reaction mixtures form peptides when they evaporate to dryness at high temperatures. At night, the reactions acquire water from the atmosphere to form aqueous solutions at low temperatures, thereby rewetting without the addition of water by a rainstorm and avoiding the possibility of destructive overdilution.

Seemingly minor differences, like changing the ambient humidity from 50% to 70%, can lead to profound differences in the tendency of samples to absorb water, and hence, large differences in the yields of reactions they host. And while potassium and sodium are neighbors on the periodic table with almost identical reactivities, many potassium salts are deliquescent where their sodium counterparts are not. The salt K2HPO4 fostered yields of peptides from glycine ten times greater than in Na2HPO4.

The team believes their system may provide clues relevant to solving the mystery of why all life on Earth spends so much energy enriching potassium inside cells and throwing sodium out.

“This creative research, exploring how the chemical environment regulates formation of large molecules, represents another major step toward CCE’s goal of understanding the chemistries behind early biological molecules. Successful engagement of undergraduate researchers in this work also reflects NSF’s mission of integration of research with education for the training of future workforce,” said Dr. Lin He, the Acting Deputy Division Director for the Division of Chemistry at the National Science Foundation.

Despite their exotic-sounding name, deliquescent salts are common and exist in natural settings where they can play a role in enabling liquid water to exist in environments that are otherwise too cold and/or dry.

In a hyper-arid region of Chile’s Atacama Desert that is inhospitable to life, microbial communities reside in deposits of the mineral halite. Their photosynthetic activity spikes when the relative humidity rises above 70%, exceeding the threshold where their halite environment becomes deliquescent.

Deliquescent mixtures of chloride and perchlorate salts have also been identified on Mars. These mixtures appear to flow seasonally and have garnered significant interest from astrobiologists as the only liquid water on the surface of the planet.

Making use of these naturally occurring minerals, this new study proposes wet–dry cycles regulated by natural daily oscillations in temperature and humidity—not on uncontrollable rain events—constitute a prebiotically feasible model for driving the chemical formation of biopolymers central to biology.

Was a simple pinch of salt the missing ingredient for cooking up life on Earth? We may never know for sure, but in this case, it certainly seems to make a great improvement to the recipe for baking proteins.

This work was jointly supported by the NSF and the NASA Astrobiology Program, under the NSF Center for Chemical Evolution (award CHE-1504217).