In a career that spanned nearly six decades, Scott was widely recognized as an educator, filmmaker, scholar and researcher. 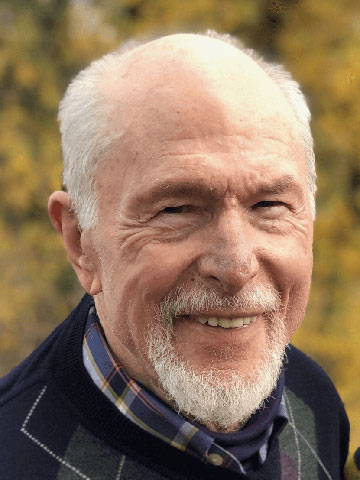 Dr. Scott received his undergraduate degree from Rockhurst College (1955) before going on to earn his master’s (1957) and Ph.D. (1960) from Kansas University. Prior to coming to SLU, he also taught at KU, the University of Kentucky and Ruhr University in West Germany.

In addition to his life as a University professor, Scott was an award-winning filmmaker involved in making more than 30 documentaries with topics that ranged from health issues to marine meteorology as well as famous St. Louisans including explorer William Clark, poet Sara Teasdale and botanist Henry Shaw. In 1987, he produced the documentary, “Grandeur in Granite: The Saint Louis Cathedral,” which aired on local PBS station KETC-Ch. 9.

Scott’s articles were widely published in the United States and abroad. In the 1960s, he also regularly wrote film criticism for the New York City opinion journal, Cross Currents.

“I remember his enthusiasm and the reach of his imagination. He was never satisfied with just teaching lit. He introduced us to classic films with the same analytical rigor and historical insight that he brought to poetry and novels."

In addition to his many accomplishments, Dr. Scott was a highly valued friend and colleague whose wisdom, warmth and wit touched those around him.

“Jim's distinguishing traits were his intellectual curiosity, which was infectious, and his optimism,” said Toby Benis, Ph.D., chair of the English department. “These qualities made him an exceptional teacher and mentor to colleagues as well as students.

English professor emeritus Joe Weixlmann, Ph.D., said Scott was not just a teacher of the humanities but a paragon of humanity itself.

“He brought joy, excitement, wit and kindness to everyone and everything he came into contact with. His body may be gone, but the spirit of this good man will continue to bring positive energy to those who had the good fortune to know him.”

Vince Casaregola, Ph.D., a longtime friend and colleague, recalled Scott’s generosity, insights and inspiration to those around him.

"Jim Scott was one of the first people from Saint Louis University whom I met, almost 30 years ago, when I was interviewing for the job at the Modern Language Association conference,” Casaregola said. “Since then he has been a mentor, a colleague and a friend.  I came to cherish the conversations we had, quite frequently, about film history and the cultural importance of film. Like so many others, I benefited from Jim's knowledge, insight and kindness. I will always think of him as I plan courses or do research on film. I will miss him greatly.”

Lessons That Lasted a Lifetime

Scott was a great mentor to and guiding influence on his students, many of whom remained in contact with him decades after leaving SLU. Lee Rossi, Ph.D., a 60s-generation student of Scott who is a full-time dad and part-time poet now living near San Francisco, recalled the man who started as his professor, was an early reader of his work and became a lifelong mentor and friend.

“I remember his enthusiasm and the reach of his imagination,” Rossi said. “He was never satisfied with just teaching lit. He introduced us to classic films with the same analytical rigor and historical insight that he brought to poetry and novels. In the 50 years since I left SLU, he was the only teacher with whom I stayed in touch. I marveled at his energy and the range of his interests. His devotion to the people and history of St. Louis made him a unique and important cultural presence, one of those living treasures we sometimes talk about.”

Rossi also shared a story about how Scott went above and beyond to assist and enlighten students.

“There were many personal kindnesses I experienced from Jim and his wife Carolyn,” Rossi said. “I also owe my perhaps most vivid experience of fear to Jim. I’d just been awarded a Fulbright to teach in Germany, and Jim, who was teaching at the University of the Ruhr in Bochum at the time, offered to pick me up at the airport. The idea was that I would stay with the Scotts for a couple of days and receive an intensive orientation in German life and grocery stores before heading to my destination. Little did I know how exciting that ride was going to be.

Jim was a timid driver and I was a terrified passenger. There we were, tooling along a German autobahn at 60 mph in a flimsy Citroen ‘Duck.’ All of sudden we'd be passed at 120+ by a BMW or Mercedes. At several points, we had to pull around a large slow tractor-trailer, Jim and I both on the lookout behind us for one of those fast cars. Jim told me they wouldn’t slow down; they’d ride right over you. I have nothing to compare to that ride, not even Disneyland.”

Charlene Spretnak, who went on to become a professor in philosophy and religion, co-found the Green Party of the United States and write nine books on cultural history, religion, spirituality and social change, shared the impact Scott had on his students.

"Professor Jim Scott woke us up to the adventure of a life of the mind that is constantly in motion, curiously engaging with literature, film and the world in all its turmoil and glory,” Spretnak said. “He was a formative influence on the intellectual life of so many of us in the honors program in the Class of '68, which is why we kept in touch with him over the decades."

John Knoll, Ph.D., who completed his graduate and doctoral degrees at SLU in 1965 and 1973, respectively, was greatly influenced by Scott as both an educator and a filmmaker and in many ways followed in his footsteps.

“He inspired me as a teacher and a communicator to teach and we kept in touch as I lived in Texas, California and Utah,” said Knoll. “I had the opportunity to work with him on the first film series at SLU. When I returned to St. Louis we made several documentaries together."

Knoll added that over those 50 plus years they maintained good and close family friendships.

Dr. Scott was preceded in death by his wife Carolyn. He is survived by his two children and their spouses, Adrienne Scott and Philip Persson of Chico, California; and Jamie and Julie Scott of Denver, Colorado; and two grandchildren, Hannah Sophia Scott-Persson and Zachary James Scott.

A Celebration of Life will be held at 10 a.m. Sunday, Nov. 3, in the Spink Pavilion at the Missouri Botanical Gardens.

In lieu of flowers please consider a donation to the Missouri Botanical Gardens in his name.