The Opus Prize, awarded each year in partnership with a Catholic university, is one of the world’s most prestigious recognitions for faith-based, nonprofit innovation and work. The $1 million award and $100,000 prizes for the other finalists make up one of the world’s largest faith-based awards for social entrepreneurship. 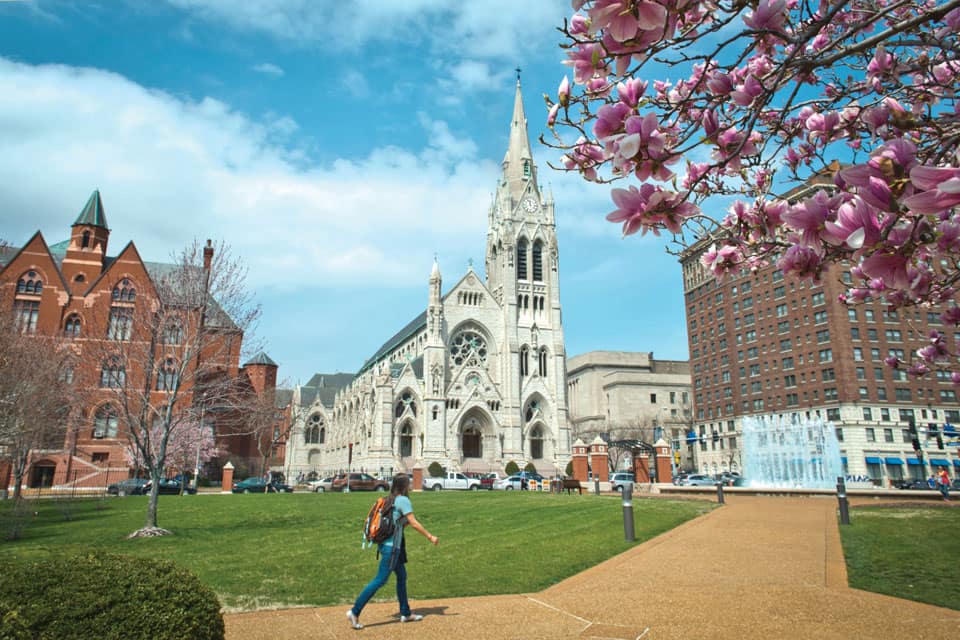 Saint Louis University and the Opus Prize Foundation announce the three finalists for the 16th annual $1 million Opus Prize, awarded annually to a leader in faith-based humanitarian work. The prize will be awarded Nov. 21 at SLU. SLU photo.

The Prize is given to an organization in honor of the winner. Opus Prize finalists are:

Saint Louis University sent students, faculty and staff to the three finalists’ home countries this spring to witness firsthand the work of the leaders. The 2019 finalists come from Puerto Rico; the Democratic Republic of Congo; and Kenya. All the finalists will be at Saint Louis University the week of Nov. 17-22 for a week-long celebration and recognition of their work.

The finalists for the 2019 Opus Prize are:

Michael Fernandez-Frey, founder and director of Caras con Causa (Faces with a Cause)

Caras con Causa is a non-governmental organization (NGO) serving economically poor families in communities bordering the Bay of San Juan, Puerto Rico. Caras con Causa, under the inspirational leadership of Fernandez-Frey, is committed to children’s education, restoring the wetlands after the hurricane, and organizing communities to protect themselves against the destruction of their homes by the government.

In 2012, Sr. Catherine started the organization in the Democratic Republic of Congo after being invited by the local bishop to come to the city of Kolwezi to work with widows and orphans.

Sr. Catherine first listened to the community and within 10 months developed a five-year plan which focused on addressing:

Among the many successes in the seven years since her arrival is the enrollment of 2,899 children in school today.

Brother Charles oversees a primary school and vocational education program run by the Brothers of Charles Lwanga on the edge of the Kibera slum, the largest slum in Africa. The primary school currently enrolls 280 students and 260 young people, including teenage mothers who are enrolled in vocational programs.

The vocational programs are an effective strategy in alleviating poverty and include programs in motor vehicle maintenance, hairdressing and beauty, hospitality, computer technology and more. The Bannakaroli brothers see themselves as defenders of human rights and as a voice for the vulnerable.