Four officers with Saint Louis University’s Department of Public Safety (DPS) are being hailed as heroes for their swift, life-saving actions during a recent off-campus incident. 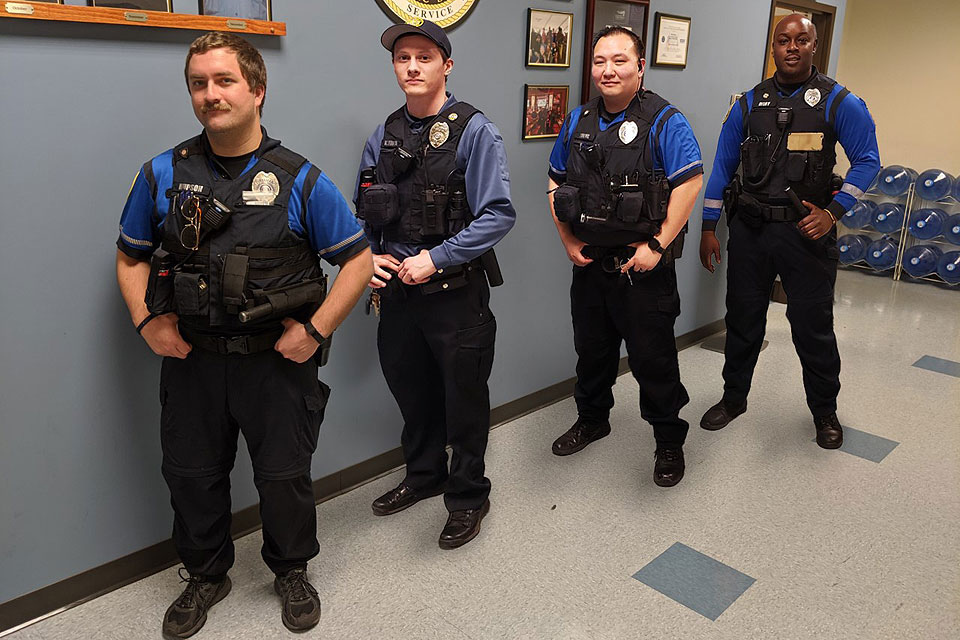 Officers Jared Kleinik, Matt Hudson, Jon Young and Maurice Ivory used training in first aid and in the use of tourniquets to provide life-saving measures during an off-campus incident. Submitted photo

Officers Jared Kleinik, Matt Hudson, Jon Young and Maurice Ivory saved two people’s lives when they responded to a shooting on a Metro Bus on Monday, March 30, according to the St. Louis Fire Department. The officers used training in first aid and in the use of tourniquets to provide life-saving measures.

SLU’s DPS officers patrol the campus and its perimeter 24 hours a day, seven days a week with foot, bike and vehicle patrols.

Kleinik was behind the bus when he heard what he thought were gun shots from inside that bus as it stopped just off the intersection of Grand and Lindell Boulevards. Kleinik called for assistance and Hudson, Young and Ivory immediately responded.

On the bus, the officers discovered two people not affiliated with the University who had been shot. The officers used their training to stabilize the two individuals until the fire department’s emergency medical services (EMS) and officers from the St. Louis Metropolitan Police Department could arrive on scene.

After the incident, St. Louis Fire Chief Dennis Jenkerson reached out to Jim Moran, SLU’s assistant vice president for public safety and emergency preparedness, to let him know that the DPS officers’ actions directly resulted in saving lives, noting that the fire department’s EMS supervisor on the scene also praised the four officers.

"I am very proud of Officers Kleinik, Young, Hudson and Ivory for their decisive actions during this tragic incident," Moran said. "Without their actions we very well could have had a different, even more tragic outcome."

In this instance, Moran said, it was the city’s fire department personnel who trained SLU’s officers in the life-saving techniques they employed on the bus.

"I was told many years ago – in my early years in law enforcement – that professionalism is being prepared for when ‘it’ comes and knowing that you are there and trained to respond," Moran said. "Officers Kleinik, Young, Hudson and Ivory were truly professional and were prepared because of their training."

"They represented our University and DPS in a manner that brings credit to our entire profession because they have taken their training seriously and were prepared for when that critical moment arrived," he continued. "I couldn’t be prouder to work with each of them, and every member of my team."

Kleinik has been a DPS officer since 2018. Young has been with DPS 12 years, Hudson for 8 years and Ivory has been with the department for 12 months.