Professor Emeritus Returns to SLU to Share His Holocaust Past

Raul Artal, M.D., was born in a concentration camp under difficult circumstances that ultimately inspired him to become an obstetrician who specializes in high risk pregnancy. 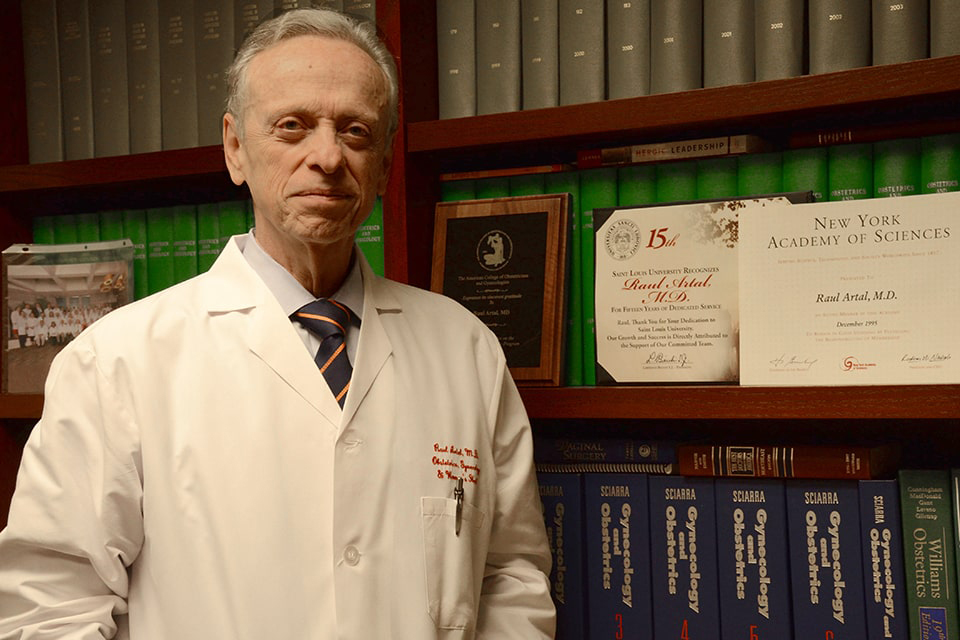 Now retired from his positions as a SLUCare obstetrician and chairman of the department of obstetrics, gynecology and women’s health at Saint Louis University, Artal was born in 1943 in Bersad, a concentration camp located in a part of the Ukraine called Transnistria. The SLU professor emeritus enjoyed a distinguished career in academic medicine that includes delivering more than 6,000 babies (he had lost count), many from moms who have diabetes, heart problems, cervical issues and other conditions that potentially threaten the health of mother and child.

Like the women he cared for, his mother, Roza, had health problems that made her pregnancy complicated. At the time of Artal’s birth, his mother, imprisoned in a concentration camp, was severely malnourished and underweight. Her body was racked with lice and typhoid, which ravaged the camp’s inhabitants who were forced to live in deplorable conditions. Roza suffered through a difficult labor, watched over by an obstetrician, also imprisoned in the camp.

Artal was born by breech delivery in a barn, hidden from authorities. It was not an easy way to enter the world.

“I think it was only later in life when I understood my inspiration to go into medicine, and ob/gyn in particular,”Artal said. “It was probably in the back of my mind, the horrible experiences my mother endured. I wanted to help other women, to try to minimize their suffering.”

Professional Accomplishments as an Obstetrician

While an intern at Beillinson Hospital in Israel, Artal delivered his first baby, in 1970. The moment was magical and the responsibility immense.

“It was very special,” Artal said, “like holding precious glass or crystal, and I was terrified not to drop or break the baby.”

I think it was only later in life when I understood my inspiration to go into medicine, and ob/gyn in particular. It was probably in the back of my mind, the horrible experiences my mother endured. I wanted to help other women, to try to minimize their suffering.”

His SLU office bookshelves held holiday photo cards of smiling children that he delivered and letters from grateful patients – a cherished and an ever-present reminder of why he does what he does. Rifling through the cards, he remembered happy beginnings.

One card, a photograph of five children including a set of triplets he delivered, is from a nurse. “She went all the way to 34 weeks.”

And another: “This mom had a condition where the platelets dropped precipitously and she started bleeding severely. I saved her life and this is the little girl.”

And another from a nurse who, at 20 weeks gestation, was nearly completely dilated, with her baby’s amniotic sac pushing toward a way too early birth. “I placed a cervical cerclage (series of stitches to close her cervix). It’s a type of procedure that is a modification of what everybody else does, but it’s my unique method with a very high rate of success. She went all the way to 32 weeks and delivered a normal, healthy baby.”

Artal became a world authority on exercise and diet during pregnancy – expertise honed from his research and experience treating moms who have diabetes and who nearly always are overweight. His research supports weight loss during pregnancy in women who are obese and has found that pregnant women who exercise have better pregnancies than those who aren’t physical active. He led a team that rewrote activity guidelines for the American College of Obstetricians and Gynecologists – urging sedentary moms-to-be to get moving.

Artal is proud of his professional accomplishments that include serving as past president of the Council of University Chairs of Obstetrics and Gynecology and current chair of the Liaison Committee of Obstetrics and Gynecology (LCOG), which is the liaison committee for all women’s health specialty and sub-specialty organizations. He has been a member of national and international specialty committees for the National Institutes of Health, World Health Organization, American Diabetes Association and Diabetes UK.

Talking about His Difficult Past

By contrast, he had been very private about the painful details of his past -- his childhood, in particular. He has not been back to the concentration camp where he was born. In fact, it took his selection as a champion for the Center for Medicine after the Holocaust for Artal to begin publicly sharing his family’s experience during the war. The organization teaches medical school students and doctors about the role physicians played in committing egregious atrocities against innocent victims.

“I didn’t want anyone to feel pity for me,” Artal said. “I wanted to pass along the message that anyone can succeed despite extreme adversity.”

Since leaving SLU in 2014, Artal has become a tireless advocate for Holocaust remembrance. He recently attended the 75th anniversary of the liberation of Auschwitz in Poland. He spends his time speaking to student groups, volunteering at the Simon Wiesenthal Center in Los Angeles and the Los Angeles Museum of the Holocaust, and addressing groups around the nation about the lessons of the Holocaust.

It’s a lesson he lived.

My parents would cover my head so I was not discovered, and trained me early on not to cry.”

Artal spent nearly the first year of his life in Bershad, which was a barricaded ghetto with 30 to 40 Jewish people assigned to each structure. The Nazis forced the residents into a slave-labor force that built roads for the advancing German army.

Sometimes the Nazis would sweep through the camp, on killing sprees, and Artal’s parents would frantically hide him, as children and babies in particular were targeted for extermination.

“My parents would cover my head so I was not discovered, and trained me early on not to cry.”

After its victory at Stalingrad, Russia’s Red Army liberated Bershad on March 4, 1944. Artal’s parents returned to their hometown, now known as Chernivtsi, and tried to rebuild their lives with their young son, despite learning that much of their families did not survive.

Artal’s mother, a concert pianist, was hired back by the music academy where she had worked before the war.

“She performed in several concerts, but after nearly four years of concentration camp, she found that she had lost her dexterity. She never performed in public again. Instead, she taught piano and Russian literature in a local school,” Artal said.

Artal’s father, a construction engineer, was recruited by the Red Army after liberation of the concentration camp to help re-build bridges for the advancing Russian military.

“After the war ended, many Nazi collaborators were still roaming the region and my father got shot in his leg. He was badly injured and spent nearly a year in the hospital recuperating. The injury ultimately healed, but by that time, Ukraine fell to the Communists,” Artal said. “My parents decided to flee to neighboring Romania, although that country also fell to the Communists shortly thereafter.”

With the unlikely intervention of a U.S. senator, the Romanian government granted the Artals permission to leave the country. They arrived in the United States in 1960. Artal had to learn English – he already spoke German, Russian and Romanian – and attended high school in Queens, New York.

After less than a year, Artal’s parents decided that they wanted to live in Israel. Walking down a New York street, they noticed a sign in front of a store: No Dogs, no Negroes, No Jews.

“I had yet to finish high school, and we moved to Israel, like true nomads. I again enrolled in high school and had to learn another new language, Hebrew. Learning Hebrew from scratch, completing matriculation exams and graduating high school after living in the country barely two years is still one of my greatest achievements,” he said.

At 18, Artal was drafted into the Israel Defense Forces, Israel’s army, where he met his future wife, Michal, a native Israeli. The two made two critical decisions -- to marry shortly after completing military service and to attend medical school together.

Learning Hebrew from scratch, completing matriculation exams and graduating high school after living in the country barely two years is still one of my greatest achievements.”

The only place both were accepted was the University of Milan in Italy, so Artal learned his sixth language, before the two transferred to finish medical school at Tel Aviv University.

They moved to the United States for their residencies, his wife specializing in psychiatry and Raul Artal, in obstetrics/gynecology for high risk patients.

“At that time, opportunities in Israel were quite limited,” Artal said.

So the Artals decided to build their medical careers in the United States  and return to Israel often to visit their families.

Raul Artal became a professor at the University of Southern California, which at that time offered some of the largest obstetrics services in the county, and, later, was appointed chair of obstetrics and gynecology at SUNY in Syracuse, N.Y., which he describes as “Siberia, New York.”

Artal was recruited to Saint Louis University in 1998, and served as chair of obstetrics, gynecology and women’s health until 2014.

I’m proud I was able to recruit some of the most dedicated, talented physicians and staff in the country, and I am so grateful for the opportunity I was given, to build such a strong and successful department.”

“I saw this as an opportunity to grow a department from the base up, and I think we succeeded.”

Artal sounds like a proud father when he talks about building Saint Louis University’s department of obstetrics, gynecology and women’s health – which he considers his greatest accomplishment.

“This department is the premier department of obstetrics and gynecology in St. Louis. There is not a condition that we are not prepared to treat and we have excelled in every single one of our niches – high risk pregnancy, minimally invasive gynecological surgery, infertility and incontinence among them.

“I’m proud I was able to recruit some of the most dedicated, talented physicians and staff in the country, and I am so grateful for the opportunity I was given, to build such a strong and successful department,” Artal said.

Since his retirement, Artal stayed engaged in medical education. He lectures on ethical lessons that doctors today must learn about the appalling and abusive way that medicine was practiced under the Nazi regime.

“Where do you draw the line of ethics in medicine? It is unbelievable to me how highly educated people during World War II, physicians, willingly participated and committed heinous criminal acts against innocent people under the guise of medicine and science, with total disregard to human rights,” he said.

“We must learn and understand how human beings, doctors, behaved this way. The fact that someone is a physician doesn’t mean they’re right to be God and decide who lives and who dies.”

A version of this story appeared in April 2014, months before Raul Artal, M.D., retired as chair of obstetrics, gynecology and women’s health at Saint Louis University.