Bernard J. Coughlin, S.J., former and first dean of the School of Social work at Saint Louis University, died Jan. 28, 2020. He was 97. Coughlin left SLU in 1974 to become the 23rd president of Gonzaga University.

When Gonzaga announced Coughlin’s hiring in the spring of 1974, the chairman of Gonzaga’s Board of Trustees said he was a unanimous choice. 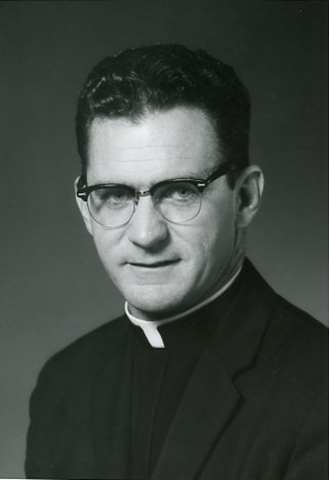 “Father Coughlin is regarded as one of the nation’s leading Jesuit administrators with an impressive record of previous successes in positions he has held,” Harry F. Magnuson, chairman of Gonzaga’s Board of Trustees said in a release. “He is an obvious leader, a man of strong character and he projects a personal warmth that fits in perfectly with the character of the University.”

Magnuson noted that while at SLU, Coughlin “developed a full-fledged, undergraduate program with a degree in social work, then laid the groundwork for a Ph.D. program.”

A profile in Jesuits West magazine called Coughlin “an exceptional dean for a dozen years at Saint Louis University.” Per SLU archives, during his tenure the School’s enrollment increased 250%.

When he was named dean, the school provided only master’s degrees in social work. Coughlin developed SLU’s undergraduate program in social work, which launched in 1972, and readied the school to offer Ph.D. level degrees in 1974, as he was moving on to Gonzaga.

Coughlin was born Dec. 7, 1922, in Galveston, Texas, the second of five children of Eugene and Celeste Coughlin. For a time, he joined his father in working for the railroad, but he felt called to the priesthood.

He graduated from SLU in 1944 with a bachelor’s degree in the Classics. He went on to earn graduate SLU degrees in philosophy in 1949 and theology in 1956.

He held a master’s degree in social work from the University of Southern California and Ph.D. in social welfare from Brandeis University. An archived SLU news release notes that Coughlin was the first priest to earn a Ph.D. from Brandeis.

He was named director of SLU’s School of Social Service in 1963, while it was still a division of the Graduate School. When it became a separate school at the University in 1964, he became its first dean.

Coughlin was active in the field of social work, serving on local, national and international committees. In 1968, he was a U.S. representative at the International Council of Social Welfare in Helsinki, Finland.

He also served as the first chairman of the Conference of Deans of Schools of Social Work in 1972-73.

Coughlin went on to be Gonzaga’s longest tenured president, serving from 1974 to 1996. He was also the University’s only Chancellor, serving in that role from 1996-2016.

Fr. Coughlin is survived by his sister Marilyn Wood, and numerous nieces and nephews. He was preceded in death by his parents, and brothers Larry, Pat and Donald.