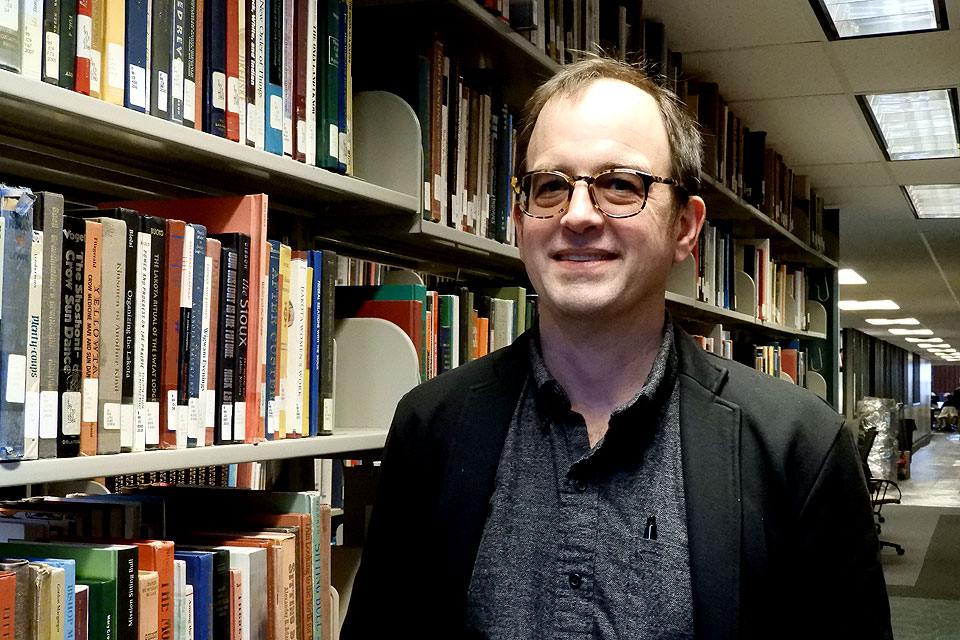 Devin Johnston is a professor of creative writing at SLU and has written seven collections of poetry. His latest collection, Mosses and Lichens, has been tipped as a "Best Poetry Book of 2019" by the New York Times. Photo by Amelia Flood

With the publication of his latest work, Mosses and Lichens: Poems, Devin Johnston is being lauded nationally by the New York Times for his poems that examine the boundary between human community and the wild edges of the woods. A professor of creative writing in the Department of English in the College of Arts and Sciences, Johnston's poems have received widespread acclaim.

Read a Poem from The Book

The collection is Johnston's seventh. He has also published Far-Fetched, Traveler, Creaturely and Other Essays, Sources, Aversions and Telepathy. The Times' David Orr, has described the poetry collected in Johnston's newest book, Mosses and Lichens, as “admirable as much for its classical poise as for the tremors that both undermine and bolster that poise," and has tipped it as a "Best Poetry Book of 2019."

Far-Fetched, published in 2015, also by Farrar, Straus and Giroux, was also tapped by the Times  as one of that year's Best Poetry Books, with Orr again praising Johnston's poems as "a triumph of refined technique, but more than that, it’s a demonstration of restraint’s emotional resonance. A delicately marvelous book."

I grew up in Winston-Salem, North Carolina, and I now live in the Tower Grove neighborhood of St. Louis with my wife, Andrea, our dog Edie, two hens, and two children. I went to graduate school for literature in Chicago, and I was always a reader and writer. But I have as much affinity for music and visual art (to listen and look, as I have no great skill with either). Right now, for instance, I'm sitting in the kitchen and listening to Paul Clayton's "Whaling and Sailing Songs" from the Days of Moby-Dick, while doodling a picture of my dog.

I teach poetry, through both literature and creative writing classes at SLU. I am also involved in the Prison Education Program, organizing a speakers series and some workshops at local prisons. That experience has been deeply rewarding these past ten years. Outside of the university, I'm an editor for Flood Editions, a nonprofit publisher of poetry, art, essays and short fiction.

Tell about your new book and the poems collected within it.

Mosses and Lichens was published by Farrar, Straus and Giroux last year. I wrote the poems in my mid-forties, and I think they reflect an experience of midlife. Some of the poems often take place at the edges of human community, where things break down or run wild. Some are distinctly Midwestern, as I naturally draw from what's close at hand. But the book is also a miscellany, a collection of poems that emphasizes variety (of forms, subjects, tones) as much as coherence. It includes some passages of translation from Ovid's Metamorphoses, brief lyrics, sonnets, sequences, sketches . . .

Can you talk to us about your style?

I couldn't begin! The English poet Roy Fisher has a poem that begins, "Style? I couldn't begin . . . Those intricacies / of self and sign. The power to mimic / and be myself. I couldn't." Style is important, but it's difficult for me to characterize my own. That said, I aspire to concision, condensation, and musicality. I tend toward song structures, sensory images, and to words that have sharp edges. My poems rely on shades of irony, by which I mean, sympathetic recognitions of tensions and contradictions. My poems tend to be observant, rather than declarative. I trust readers to sound the poems, and then to feel the implications of the words.

Tell us about your journey as a writer.

In my twenties—the 1990s—I wrote a great deal, read a great deal, published only a few poems, and shared my work with a few friends. I developed slowly, without an audience. That was lucky, as I needed time to explore and experiment. My first book was published in 2001, in Australia. I traveled to Sydney to give readings, and I was a poet in public for the first time, on the other side of the world. Since then, I can mostly trace my development in terms of the challenges I set myself: to learn certain forms, to try more narrative modes, to find ways of approaching edges of experience that I haven't yet.

How did you come to poetry as a form? What is the most compelling thing about poetry to you personally?

I think everyone comes to poetry and poetic thinking in early childhood, in the first unfurling of language. Kids tend to love rhyme, patterned language, puns, wordplay. Many people decide to set poetry aside, or get told it's not useful, or become embarrassed by it, in the teenage years. Most people never return to it again. I wrote poems from a young age, and for reasons I can't trace, I never stopped.  What's the appeal? Poetry brings together the dreaming mind and the waking mind. It's like a trance, induced by a phrase or rhythm, produced through a sort of exuberance. Poetry offers solvable, even seductive problems. A half-finished poem is a good sort of problem to have.

What advice would you give your fellow faculty, staff and students about incorporating poetry into their lives?

I'm not the sort of person who gives much advice, and I am not really an evangelist for poetry. But I do think people need creative expression in their lives, in whatever form. It can be dangerous, to disregard that whole part of ourselves, in favor of more practical concerns. The danger is usually unhappiness. If someone is drawn to poetry, as a reader or writer, I mostly suggest they find a scale that fits their days. It might be haiku, which takes about three seconds to read. Basho, Buson, and Issa are wonderful, and Hiroaki Sato's book On Haiku is a good introduction.

How does your poetry inform your teaching?

Happily, most of what I teach is poetry, whether in creative writing or literature courses. I think my experience as a writer gives me access to the craft of it. I encourage students take a poem apart to see how it works. As a poet, I tend to worry less about critical interpretation, and more about a poem's presence: the effect of a poem on us, as an experience.

What poets have been the greatest influences on your work and how do you see these conversations informing your work?

Poetry is one ongoing conversation, with the living and the dead. The poets I find useful, that have influenced my work, include too many to list. But these influences are mostly submerged when I turn to writing: I don't consciously think about them, but I sometimes think through them, making use of something I may have learned long ago.

Write Stuff is an occasional series of interviews with SLU faculty and staff authors who have newly-published or forthcoming books. To submit your work for possible inclusion in the series, email Newslink.