The American Association of Critical-Care Nurses (AACN) has honored Norma Metheny, Ph.D., the Dorothy A. Votsmier Endowed Chair in Nursing at Saint Louis University, with its 2020 Marguerite Rodgers Kinney Award for a Distinguished Career. 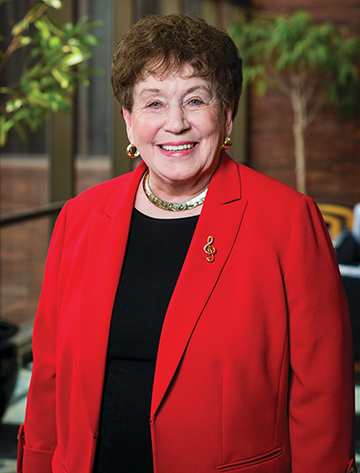 Metheny is being honored for her exceptional contributions that enhance the care of critically ill patients and their families, and further AACN’s mission and vision.

Metheny was named the award recipient on June 25 and will receive the award during the 2021 National Teaching Institute & Critical Care Exposition (NTI), due to the COVID-19-related cancellation of NTI 2020.

“Dr. Metheny’s research has influenced feeding-tube placement guidelines that set standards of care nationally and internationally,” said AACN board president Megan Brunson. “Her body of work demonstrates her strong belief that nurses’ front-line clinical work provides an invaluable foundation and motivation for research. Throughout her career, she has encouraged new researchers to ‘push the envelope’ in their contributions to evidence-based practice.”

Safe feeding-tube placement has been a theme throughout Metheny’s research career. Her efforts to reduce complications in critically ill, tube-fed patients have resulted in improved patient care protocols and clinical innovation in practice. Her research has shaped national health guidelines for proper placement of feeding tubes in critically ill patients and has resulted in documentable changes in textbooks on medicine, nursing and nutrition.

“Norma Metheny has had a long and illustrious career in nursing. She has been an excellent teacher and faculty member, holding very  high standards for herself and others,” said Peggy Ellis, Ph.D., interim dean of the Trudy Busch Valentine School of Nursing. “Dr. Metheny has served as a mentor for many students and new researchers who will influence nursing practice far into the future.”

Metheny is a proponent of ensuring new nurses have strong critical thinking skills and has touched the lives of countless nursing students during her 41 years as an educator. She is a frequent speaker at regional and national conferences, presenting at NTI as early as 1976.

“The Valentine School of Nursing at Saint Louis University has valued and so appreciated her as a researcher, faculty member, and nurse,” Ellis said. “Congratulations to Dr. Metheny for this well-deserved recognition.”

Metheny is a fellow in the American Academy of Nursing, American Society for Parenteral and Enteral Nutrition, Sigma Theta Tau International and the Midwest Nursing Research Society. Her innovative research and clinical contributions have been recognized with many honors and awards, including the 2006 AACN Distinguished Research Lecture and the 2012 AACN Pioneering Spirit Award. She is also a member of the Sigma Theta Tau International Nurse Researcher Hall of Fame.

Metheny began her nursing career as a medical-surgical staff nurse at Alton Memorial Hospital, later earning her BSN at Southern Illinois University, an MSN at Washington University in St. Louis and a doctorate in higher education at Saint Louis University.

About the Marguerite Rodgers Kinney Award

Established in 1997 and named for an AACN past president, the Marguerite Rodgers Kinney Award for a Distinguished Career recognizes extraordinary and distinguished professional contributions that further AACN’s mission and vision of a healthcare system driven by the needs of patients and their families where acute and critical care nurses make their optimal contribution. Recipients of this Visionary Leadership Award receive a $1,000 gift to the charity of their choice, lifetime membership in AACN and a crystal replica of the presidential “Vision” icon. Other Visionary Leadership awards, AACN’s highest honor, include the Lifetime Membership Award and the AACN Pioneering Spirit Award.

About the American Association of Critical-Care Nurses

For more than 50 years, the American Association of Critical-Care Nurses (AACN) has been dedicated to acute and critical care nursing excellence. The organization’s vision is to create a healthcare system driven by the needs of patients and their families in which acute and critical care nurses make their optimal contribution. AACN is the world's largest specialty nursing organization, with more than 120,000 members and over 200 chapters in the United States.