Robert “Bob” Petersen, an officer with the Department of Public Safety (DPS), died Thursday, March 12, 2020 after a battle with cancer. He was 68. 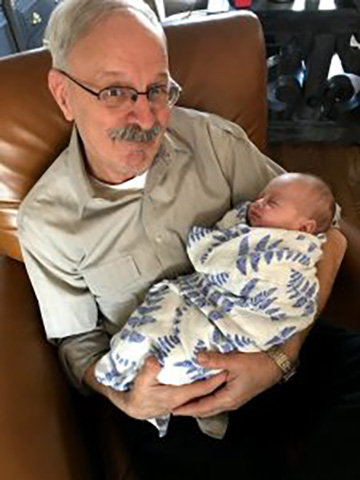 Called “another grandpa” by the younger DPS officers he mentored, Petersen was known as the linchpin of the department’s C-watch, his colleague, Officer Matthew Hudson recalled. Friends, family, colleagues and SLU students got tastes of Petersen’s caring personality and professional expertise honed over a long career in law enforcement.

“He was always positive, in every situation,” Hudson said. “He was always, always that other grandpa. And we, the younger DPS officers and our students, were all his first, impromptu grandchildren. All the kids he came into contact with – he always went out of his way to get to know them. He would talk to anyone.”

“Bob always made sure that his fellow officers were doing well,” he continued. “He would never forgot birthdays and everyone could expect to receive their own text from him on holidays.”

As a public safety officer at SLU, Petersen was "an excellent officer and an even better person," according to Jim Moran, vice president for public safety.

"He was selfless to a fault," Moran continued. "His only desire each day was to ensure others were taken care of, whether that was the SLU community as a whole or just the younger officers on his shift, which of course was all of the officers on his shift. Bob was the guy who told you the truth even if it hurt but he did it in a way that made you eventually feel good about hearing it.  Many times he walked into my office with 'Can I speak with you for a minute,' or he would catch me outside and he would give me advice, in other words the truth."

"He was my gage for what was working and what wasn’t because he was honest," Moran said.  "But what he told you was what he wanted for the group not for any selfish purpose.  It was never about Bob, it was always about what he thought was good for everyone.  He brought so many years of experience to the table so his counsel was meaningful.  He was the grandpa type guy at work too - just as we heard how great of a grandpa he was to his only grandchild.   He will be missed by all of us."

“Bob was proud to be part of such a close-knit group of people,” his obituary noted. “On the force, he was known for his caring personality and his professionalism. Bob always said, ‘You got a lecture or you got a ticket; never both.’ Bob was everything you would hope for in a police officer. He fiercely protected the public, had a strong moral compass, consistently placed others before himself, and was always humble.”

Married for more than 20 years to his wife Joan, Petersen’s daughter was his “number one priority in life.” According to his loved ones, his proudest moments were walking her down the aisle at her wedding and meeting his grandson, Jack.

Even while undergoing treatment for cancer, Petersen made time to babysit and to spend time with his grandchild, Hudson said.

“Bob loved having Jack fall asleep on him while Erin and Mike ran out for a quick bite to eat. He was a fantastic Grandpa who doted on Jack’s every move,” his loved ones said in his obituary.

“Bob had a wonderfully memorable personality,” it continued. “He would get excited over the most mundane of events in Erin’s life; she looked forward to sharing all of life’s little details with him to enjoy his pure enthusiasm. Bob was fiercely loyal to his close friends and his quick wit meant he was always ready with a sarcastic one liner. His gentle demeanor and genuine kindness made him a great listener to family and friends.”

Petersen is survived by his daughter Erin (Mike) Torney; his sister, Betty (Jack) Sullivan; his brother, John (Kathy) Petersen; and his energetic grandson Jack. He was a father, brother, uncle and friend to many.

A celebration of life is being planned for a future date.

To honor Petersen’s life and work at SLU, his fellow DPS officers will be wearing mourning bands on their badges.

In lieu of flowers, donations to Backstoppers in Petersen’s memory are requested.