“Mute yourself.” “We can’t see your screen.” “That’s not appropriate for work!” Zoom meetings have led to comedic gold in the weeks since the Novel Coronavirus COVID-19 has forced a dramatic change to office life.

Nancy Bell, a theatre program director in Fine and Performing Arts, mined the pandemic to create the farce “MUTE: A Play for Zoom.” 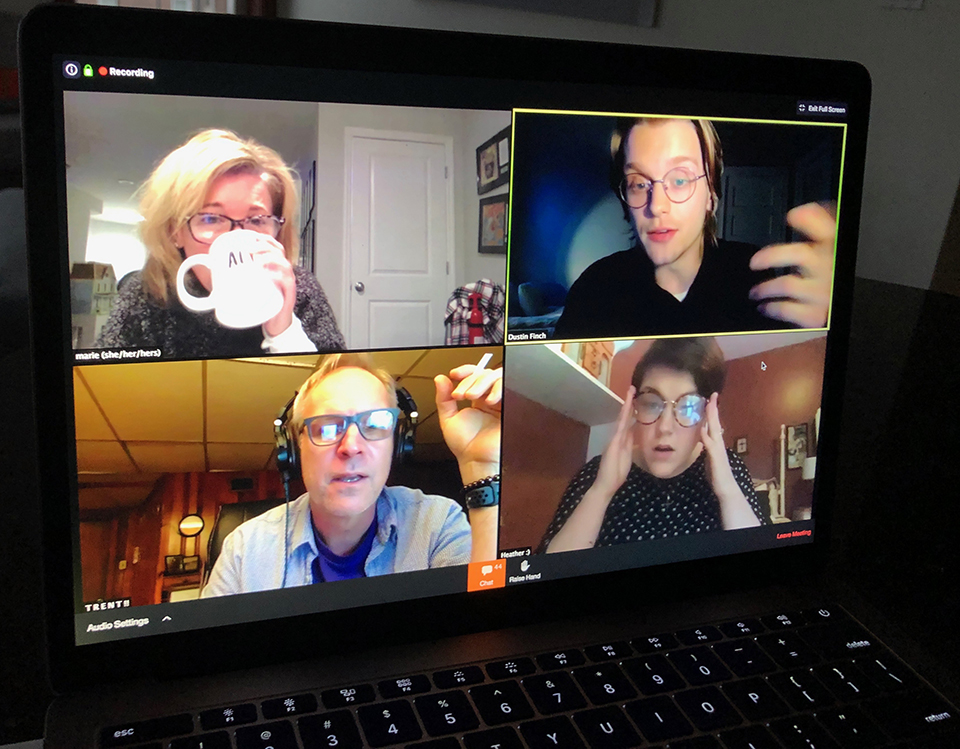 Members of the cast of MUTE: A Play for Zoom. Submitted photo.

The play premiered on Zoom in April. “MUTE” was written expressly for the videoconferencing medium.

“I have been doing research on farce, and messing around with writing farces for a while,” Bell said. “When COVID-19 struck, and everyone was piling on Zoom, the idea for “MUTE” came to me whole cloth - an apocalyptic farce on Zoom - and I wrote the first draft in about a week.”

Bell said she showed the draft to colleague Lucy Cashion, an assistant professor in theatre, and the duo worked on the dramaturgy and how to make it better.

“I knew I had to get it produced and out there right away, because it was going to become passé really quickly,” Bell said. “I’m lucky that I know some amazing performers here in St. Louis, and I hired my wonderful student, Spencer Lawton, to be our production manager. He helped me assemble the acting company.”

Bell said she was aided in the production by a SLU Outstanding Research award from a couple of years ago.

“I hadn't spent most of that money yet, so I used what was left in my fund to pay Spencer and the actors,” she said. “One of the main reasons I wanted to do it was to funnel some money to local artists who were losing so much income due to canceled shows.”

The actors jumped at the opportunity, Bell said, and each rose to the unique challenge of creating a play for Zoom. Each actor had to act as their own scenic, costume and lighting designer, as well as acting their part.

“I ended up acting as a stage manager and sort of as a camera man, as we used Zoom Webinar, which allows the ‘host’ to switch what all the participants are seeing,” Bell said. “I manipulated that in real time during the live performance, sometimes showing the audience a speaker view of one character featured, and sometimes showing all the company at once.”

We were doing theatre during a time when theatre was impossible and it felt amazing... It felt defiant to perform live, like an act of resistance.”

SLU student Jakob Hulten played the part of Dustin. Cashion, who is also the artistic director of ERA theatre company, directed the production.

“In the age of pandemic what we need to rethink is not our definition of theatre but our interpretation of space,” Cashion said. “Just as an actor livestreaming her performance exists both in your screen and in her home, an actor on stage exists both, for instance, in the fields of Agincourt surveying the dead and on the downstage-left boards, three feet from the first-row audience. The actor has always inhabited real and unreal space.”

Bell said the cast gathered a half hour early in the webinar, just like they would in a theatre.

“We didn’t know if this would work, technically, so I was pretty nervous,” she said. “We had a dress rehearsal with an invited audience earlier that day, and it had worked, but you just never know if it would be a good Zoom time or a bad Zoom time.

“Waiting for the show to start ‘backstage’ with the company was magical. We were doing theatre during a time when theatre was impossible and it felt amazing. We theatre folk love our work fiercely, and we miss it so much. It felt defiant to perform live, like an act of resistance.”

Bell said an exciting aspect of creating “MUTE” was the ease with which the team could quickly produce a good show.

“It was liberating as a playwright to have an idea, write it, and produce a successful show in a couple of weeks,” she said. “But there is no substitute for in-the-flesh performance. There is a reason human beings have been coming together in-person and in real time to share stories since the dawn of civilization. It’s a human need.”

“I think we are all getting a lesson in how important being with each other in person is. But doing this project, for me, was incredibly exhilarating, because it brought me into collaboration with other artists and the audience in a uniquely liberating way, and I’m still processing what that will mean for my own art moving forward.”