Scholarships will support retention of students from underrepresented backgrounds 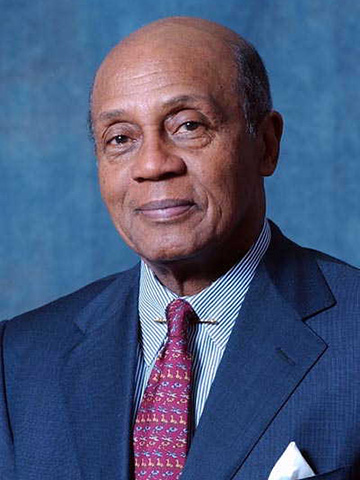 The Dr. Donald M. Suggs scholarships will be awarded to two current SLU students from historically underrepresented backgrounds who have financial need to complete their educations. The annual scholarships are part of the University’s commitment to increase racial and ethnic diversity on its St. Louis campus.

“Throughout his long and distinguished career, Dr. Suggs has worked tirelessly to support diversity and inclusion in the St. Louis area and beyond,” said President Fred P. Pestello, Ph.D. “We are pleased to announce these scholarships in his honor, and proud that Dr. Suggs is a former SLU faculty member and honorary degree recipient.”

Suggs was born in East Chicago, Indiana and attended the public schools there. He graduated with B.S. and D.D.S. Degrees from Indiana University, then completed his post-graduate work at Washington University Dental School and Homer G. Phillips Hospital. He served as chief of oral surgery at Dover Air Force Base in Delaware and was the first African-American to serve as an associate clinical professor of oral surgery at Saint Louis University Dental School.

Active in the civil rights movement in the 60’s and 70’s, he served as chairman of the Poor People’s March-On-Washington in 1968. Later, he became founder and chairman of the African Continuum, organized to bring serious non-commercial African-American artistic endeavors to St. Louis. He was the first African American to serve as president of the Convention and Visitors Bureau of St. Louis.

“It gives me great joy to know that we have added a Suggs scholarship to the resources we have available for helping underrepresented students, especially those from St. Louis, continue and complete their education at Saint Louis University,” said Jonathan Smith, Ph.D., SLU’s vice president for diversity and community engagement. “It’s another example of what we want to do to be a good neighbor and partner to the community in which SLU lives.”

“I want to express, on behalf of the St Louis American Foundation and myself, our collective gratitude to Dr. Fred Pestello and Saint Louis University for these very generous scholarships,” said Suggs. “Saint Louis University is showing, again, leadership by providing an opportunity for some high potential young people to gain an invaluable educational experience- an experience whose priorities are service and justice for everyone.”

The Suggs Scholarship awards will go to SLU students in their junior or senior years, in good academic standing, from underrepresented racial or ethnic minorities, with preference given to students from the St. Louis metropolitan area. The first Suggs Scholarships will be awarded for the 2020-2021 academic year.

“It has never been more vital for colleges and universities to assist good students who have financial need,” said Kathleen Davis, vice president for enrollment and retention management. “With the creation of the Suggs Scholarships, along with other student financial resources, SLU will continue to be a leader in providing all students an affordable Jesuit education.”

Applications for the Suggs Scholarships must be submitted by June 1, 2020, with awardee decisions made in mid-June.

Saint Louis University (SLU) is a Catholic, Jesuit institution that values academic excellence, life-changing research, compassionate health care, and a strong commitment to faith and service. Founded in 1818, the University fosters the intellectual and character development of nearly 13,000 students on two campuses in St. Louis and Madrid, Spain. Building on a legacy of nearly 200 years, Saint Louis University continues to move forward with an unwavering commitment to a higher purpose, a greater good. Learn more at www.slu.edu.