Vincent Punzo, Ph.D., a Saint Louis University alumnus and former chair of the Department of Philosophy, died May 6. He was 86. 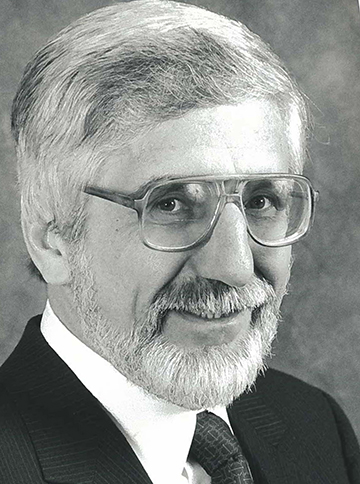 Dr. Punzo received his Bachelor of Arts from John Carroll University in Cleveland (1956) and went on to earn his Master of Arts (1961) and Doctor of Philosophy (1963) from Saint Louis University.

He began his teaching career as an instructor at Loyola University in Chicago in 1961. Dr. Punzo joined the Saint Louis University faculty in the Department of Philosophy in 1962. He would stay for the remainder of his career. During that time, he served as director of the honors program from 1969 to 1974 and the department chair from 1983 to 1989.

Scott Ragland, Ph.D., current chair of the philosophy department, lauded the contributions Dr. Punzo made during his years at SLU.

Ragland added that Punzo’s book, Reflective Naturalism, was a significant and influential textbook for ethics in a lot of Catholic schools and universities.

“In the 1960s, Vinnie’s was a potent voice against American involvement in the war in Vietnam; but, in him, there was a conservative streak that was evident in his devotion to what I like to call ‘classical Catholicism,’” Vitali said. “He was also devoted to his typewriter; and, when SLU first began to supply the faculty with personal computers equipped with word-processing software, it was plainly evident that he much preferred to hunt-and-peck his way to composing an essay on the keyboard of a stand-alone typewriter. If he ever used the PC, I never saw it.”

“Vinnie took great pride in his Italian ancestry and that he was a great fan of the Chicago Cubs,” Vitali added. “I am glad that he lived long enough to see the Cubs win the World Series.”

Jack Marler, Ph.D., associate professor of philosophy and a colleague of Punzo, remembers his commitment as he completed his doctoral dissertation on individuality in the philosophy of James Royce and concluded with the following:

“There is in Royce’s thought the quality that is found in all great philosophers. They enrich the philosophical dialogue not only in their successful grasp of certain truths, but also in their failures to see the whole truth. Therefore, if we are to reap the harvest of their labors, we must be alive to both their successes and failures.”

A celebratory Mass will be scheduled for a later date.