Nearly 100 students, priests and friends of Saint Louis University shared an evening of faith and socially distanced fellowship at a Eucharistic Adoration Procession on Monday, Nov. 9. 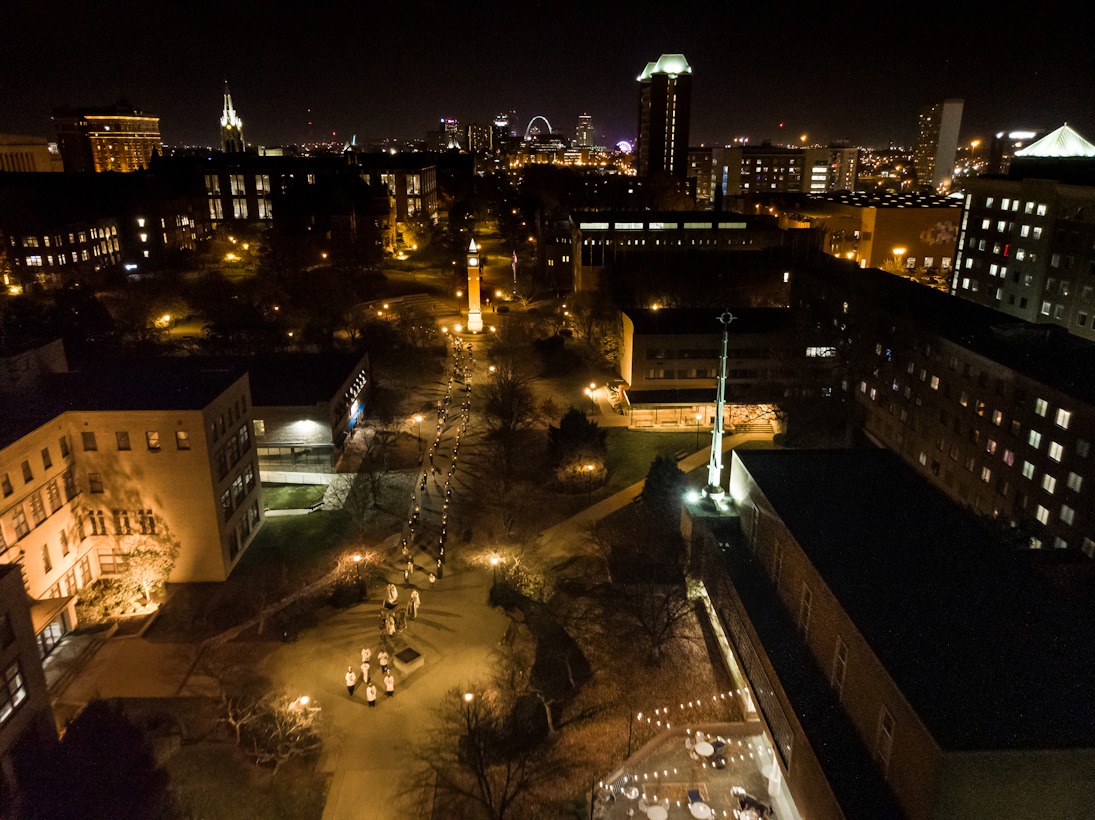 The procession and celebration marked the Feast of the Dedication of St. John Lateran, the cathedral of Rome, Italy. The 17th Century cathedral is the seat of the bishop of Rome, Pope Francis. St. John Lateran is the oldest public church in Rome.

The SLU community marked the feast day with a procession through campus. While maintaining a safe distance, students and members of the Edmund Campion Society held candles and prayed together down the West Pine Mall following Mass at St. Francis Xavier College Church on their way to the Catholic Studies Centre, walking behind an incensed Host on display in a monstrance under a golden canopy.

“We were in a festive mood to celebrate religious liberty and honor our connection with the Universal Church, since all Catholics are considered parishioners of St. John Lateran cathedral basilica,” Hilary Finley, coordinator of the Catholic Studies Centre, said. “When we follow the Eucharist in a public procession, we show others our belief that Christ is who we follow, and it is a physical manifestation of the faith we carry within ourselves.”

The procession’s organizers wanted to take an opportunity to honor God and to bolster campus spiritual life, even in a time of pandemic, Finley said, and the event’s symbolism ties directly back to Catholic teaching about the Eucharist, the body of Christ, and Christ as the light of the world.

“Any opportunity to honor Our Lord is a source of grace, which is our connection to the spiritual life,” Finley said. “This kind of event is less common, so it creates a special memory which participants recognize is unique and sacred. The golden canopy over the Host lets even those at a distance know where Jesus is physically present, and the candles which everyone carried are a physical reminder that we are all members of the Body of Christ, who is the Light of the World.”

“To process in the dark with the candlelight shining is a different experience than a procession during the day because the dark is cold and things are less visible, so the candlelight connects us to the metaphor which Christ himself spoke: ‘You are the light of the world. A city built on a hill cannot be hid. No one after lighting a lamp puts it under a bushel basket, but on the lampstand, and it gives light to all in the house. In the same way, let your light shine before others, so that they may see your good works and give glory to your Father in Heaven’ (Matthew 5: 14-16). The beauty of a Eucharistic Procession encourages others also to glorify the Lord,” she said.

“As the semester draws to a close and the weather gets colder, we wanted to take advantage of the still warmish days to process through the campus to show our love for Jesus Christ in the Holy Sacrament and extend publicly the gratitude we all feel for the many good and generous gifts He shares with us all every day,” Finley continued.

According to Finley, the Catholic Studies Centre arranged the Eucharistic Procession out of gratitude for example of Christ and his sacrifice.

“Truly, the Eucharist is the source and summit of the Christian life,” she said. “Jesuits at SLU take as their motto to be men and women for Christ, to help others find Christ in all things. We know that Christ lays down his own life for each of us every time Mass is celebrated, so to honor this gift of himself for us, Christ is displayed in honor in the very center of the ornate, golden monstrance, reminding us of Jesus’s love, that he is the center of all things.”

The Edmund Campion Society at the Catholic Studies Centre is a community of students who wish to deepen their faith and grow together in wisdom and holiness.

The society is named for Edmund Campion (1540-1581), an English Jesuit priest during the Protestant Reformation. Campion returned to England to share the sacraments with Catholics and others living under the persecutions of Queen Elizabeth I, who eventually had Edmund Campion put to death.

Campionites, as they have come to be called, participate in Mass and adoration, serve in clubs which bring help to the less fortunate in our community, gather in faith sharing groups, engage others in the broader St. Louis community through service projects, and encourage one another in intellectual and spiritual growth.

With the current strictures imposed by the COVID-19 pandemic, Friends of Edmund Campion came together to put together Waybread Bags, named after J.R.R. Tolkien’s term in The Lord of the Rings for the special food which the elves give the hobbits for their journey, for students who participated in the Nov. 9 procession. The bags contained snacks in place of the traditional meal but were a means, Finley explained, for volunteers to “show love and support for the SLU students.”

More About the Significance of St. John Lateran