Students at Saint Louis University played a significant role in SLU’s successful fight against COVID-19 this fall. When the University wraps-up classes on Nov. 24, it will do so without ever having to shift to remote instruction or alter on-campus living. And students are a big reason why. 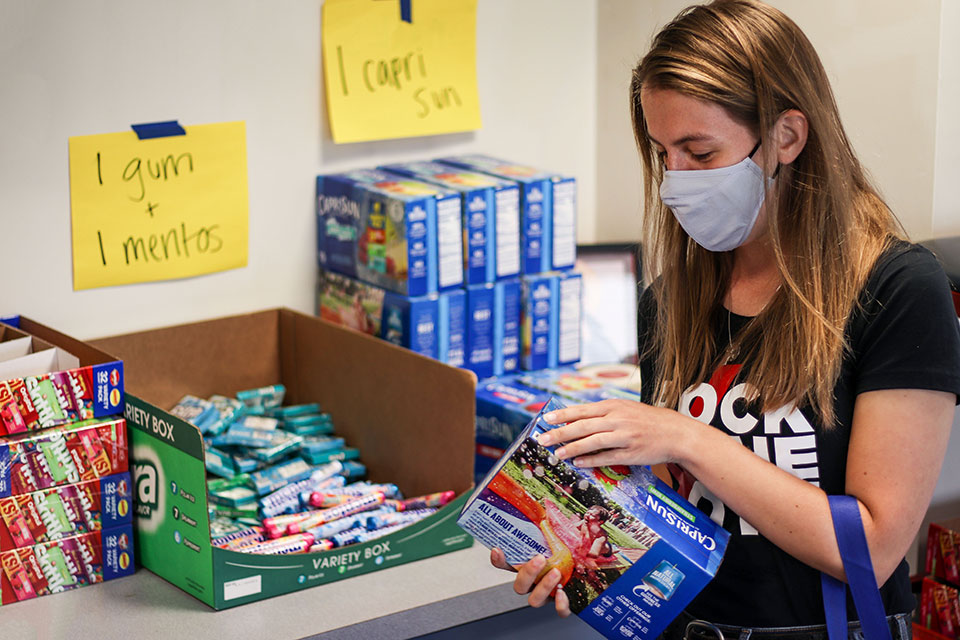 A student builds care packages for fellow Billikens in quarantine and isolation housing on campus. The packages included snacks, toiletries and handwritten notes of support and encouragement. Photo by Gaby Lawson

Student leaders at SLU were involved in COVID-19 planning efforts from the start, and they remained an important voice in key conversations. University officials believe this engagement helped foster a culture of compliance among students that found the vast majority following SLU’s safeguards.

In September, SLU began testing 10% of all 3,500 residential students showing no signs of infection. University officials say SLU wouldn’t have had the capacity to test more than 350 students every week were it not for students from the Trudy Busch Valentine School of Nursing who administered the test.

Some students earned clinical hours for their involvement, and all of the nursing students who participated learned how to set-up and manage a large-scale testing effort — useful hands-on experience as the world continues to wrestle with a pandemic.

One of the nursing students who got involved was Cathleen Cusick, a junior from Chicago. Cusick, whose brother is a freshman at SLU this year, believes the University’s Jesuit mission is one of the reasons that she and her fellow nursing students jumped at the chance to get involved with the testing.

“We are big on action,” she said. “We don’t just talk about doing something. We pitch in and make a difference. I love that we are part of the solution. I’m so glad SLU gave us the opportunity to work on this together.”

In addition to regular testing, one of the ways SLU averted a significant outbreak in the fall was the effectiveness of its contact tracing program.

Composed primarily of graduate students from the College for Public Health and Social Justice, SLU’s contact tracing team was able to reach all close contacts in less than one day of a positive case in most instances. This ensured those who needed to quarantine did so quickly, limiting the spread of the disease.

Like their nursing counterparts, the MPH students involved in contact tracing gained valuable, real-world experience in responding to a public health crisis. Among them was Rockford, Illinois, native Ashley Gomel (Public Health ’20) who served as the contact team’s co-director.

“I am definitely proud of the way students have responded and stepped up during this time,” said Gomel, who also helped organize an initiative encouraging students to get flu shots this fall.

While weekly asymptomatic testing and contact tracing engaged students pursuing health degrees, there was another effort that allowed students from all majors — from finance to philosophy — to assist in the University’s successful fight against COVID-19 this fall.

More than 50 students volunteered to participate in a new Public Health Ambassadors program. In addition to peer-to-peer education, many of the ambassadors conducted audits to assess compliance with SLU’s protocols. Their findings were shared with senior administrators every week.

Helping lead the program was Morgan LeBaige, a public health graduate student from O’Fallon, Missouri. She said the number of students who heeded the call to help with the program was greater than anyone expected. In fact, organizers continued to get volunteers well after active recruiting ended.

“The response was amazing,” LeBaige said. “Students were very invested in the health and safety of the campus and making sure the campus stayed open. We’re hoping that this can be a tool SLU can use if something like this ever happens again.”

Care Packages for Students in Quarantine and Isolation

There was another student-led initiative this fall that may not have directly contributed to quelling COVID-19 on campus as these other efforts have, but was no less important, particularly for those who were helped by it.

Four Campus Ministry interns led an effort to assemble care packages for students in quarantine and isolation housing on campus with a simple goal: make them feel less alone. The packages included snacks, toiletries and handwritten notes of support and encouragement.

One of those “minterns” is Gabriela Keator, a sociology major from western Massachusetts. Keator said in less than a week, parents and other supporters had donated $4,000 to sustain the project throughout the year.

“We saw that there was an opening for very direct care and outreach in a socially distant way to students who are experiencing a period of quarantine and isolation,” Keator said. “It is so evident to me that we know how to care for each other (at SLU). And that is a beautiful thing to be able to witness.”