The Office for Diversity, Equity and Inclusion in the School of Medicine hosted the 2020 John H. Gladney, M.D. Virtual Awards and Recognition via webinar on Tuesday, Nov. 10., an event that featured SLU award-winners and alumna Contessa Metcalfe, M.D., star of Bravo TV’s “Married to Medicine. 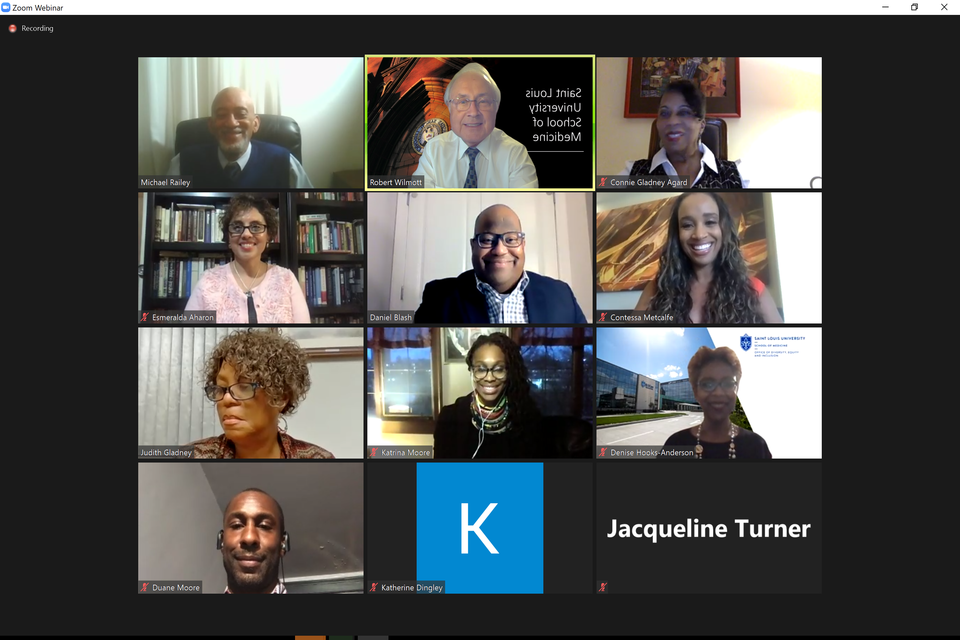 A view of Zoom featuring the presenters and guest at the virtual 2020 John H. Gladney, M.D. Awards. Submitted photo

Metcalfe discussed her time at the School of Medicine and University, her career as a physician and how her medical degree has helped navigate her career advancement as the event’s keynote speaker.

The awards and recognitions given out during the evening’s festivities included the John H. Gladney, M.D. Award, the John Berry Meachum Scholarship, the newly founded Michael T. Railey, M.D. Will You Remember Award, the Mound City Awards, including the James M. Whittico, Jr., M.D. Award, and the Diversity Ally recognition.

“It is important to recognize people for their efforts,” said Daniel Blash, Ph.D., vice dean for diversity, equity and inclusion and chief diversity officer for the School of Medicine. “I sincerely believe we are better together. We have incredibly dedicated people here who are focused on engendering a more diverse, inclusive and equitable campus climate.”

The John H. Gladney, M.D. Lectures and Recognition Webinar, along with the Gladney Student Awards, are named in honor of the late John H. Gladney, M.D. He was a well-known and respected member of the medical community, both locally and nationally. He was chairperson of the Department of Otolaryngology at Saint Louis University School of Medicine, the first African American to hold the position of Chairperson of a basic science or clinical department. He was committed to improving diversity at the University and within the field of medicine.