A professor in hematology and oncology from Saint Louis University School of Medicine has received the highest professional recognition in nursing.

Suzanne Mahon, DNSc, was inducted as a fellow of the American Academy of Nursing at its annual policy conference Oct. 31. She is among 230 highly distinguished nurse leaders from the 2020 class that represents 38 states, the District of Columbia, Guam and 13 countries. 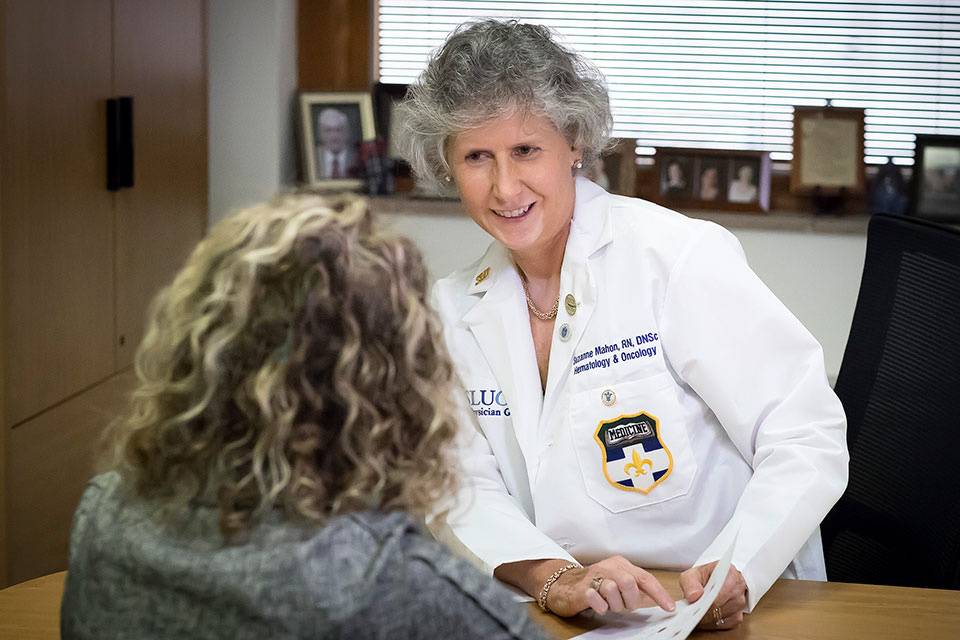 Suzanne Mahon, DNSc, was inducted as a fellow of the American Academy of Nursing at its annual policy conference Oct. 31. SLUCare photo.

“I have never had a regret about choosing the profession of nursing,” Mahon said. “I have a unique role and it means much that the Academy recognizes the importance of my clinical efforts.”

Mahon’s clinical practice focuses on advancing care in cancer genetics to patients and families. She has worked in the field of cancer prevention and early detection since 1988. Mahon is the only nurse in Missouri to be certified in genetics and is an expert in interpretation, management and test results.

“I like being able to help individuals and families choose options that will truly help them to prevent cancer or detect it when it is most easily treated,” Mahon said.

Much of her work now includes genetic testing for hereditary predisposition to developing cancer.

“The purpose is to understand an individual or family’s risk for developing cancer and help the individual or family,” she said. “I begin by collecting a personal medical history and a family history that is drawn into a visual format called a pedigree. I look at the pedigree for patterns and indicators suggestive of hereditary risk. If appropriate I offer genetic testing.”

Testing is preceded by a lengthy discussion of the potential benefits, limitations, and risks associated with genetic testing in the context of the individual family. Mahon works as one member of a team of SLUCare professionals who care for individuals and families affected by a diagnosis of cancer.

“There is no right or wrong answer – my role is to give individuals and families enough information so they can make an informed decision about what is best for them,” she said. “Thinking about and understanding risk for developing cancer can be scary to think about. I spend a lot of time helping families to manage risks and supporting them emotionally so they can implement recommendations for care.”

In 2005, Mahon was the recipient of the Oncology Nursing Society national award for Excellence of Scholarship and Consistency of Contribution to Oncology Nursing Literature Award. She was also awarded the 2011 International Society of Nurses in Genetics Founders’ Award for Excellence in Education, the 2012 Saint Louis University School of Nursing Alumni Award, and the 2018 Certified Nurse of the Year from the American Nurses Credentialing Commission for Advanced Genetic Nursing.

“The Trudy Busch Valentine School of Nursing is so proud of Dr. Suzanne Mahon and her excellent contributions to nursing and health,” said Danny Willis, DNS, dean of the School of Nursing. “Her career bringing together the best of nursing science and genetic counseling to empower individuals and families to make informed decisions about their health and wellbeing truly exemplifies the unique contributions doctorally-prepared nurses make as part of the interdisciplinary healthcare team.”

Mahon received her BSN and MSN at Saint Louis University and DNSc from Rush University.

“As an undergraduate, I repeatedly heard about the important role nurses play in health promotion and I am one of the privileged nurses who works in the world of health promotion,” Mahon said. “In the MSN program I had amazing role models who encouraged me to not only appreciate traditional roles but consider less traditional roles. I have gotten to work in a cutting-edge area of oncology because I was willing and encouraged to consider a less traditional role that has challenged me and utilizes the nursing skills I honed at SLU.”

Mahon’s three daughters all followed in their mother’s footsteps. Her oldest, Emily Tschopp, has a degree in Musical Therapy and is a graduate of SLU in both the accelerated and MSN options. Tschopp works on the palliative care team at SSM Health Saint Louis University Hospital and is an adjunct instructor in the Trudy Busch Valentine School of Nursing. Her middle daughter, Maureen Varty, received her undergraduate degree from SLU and recently completed her Ph.D. in nursing and is a nurse scientist at University of Colorado Anschutz. Mahon’s youngest daughter Elaine graduated in 2018 and is a pediatric oncology nurse at St. Louis Children’s Hospital.

Selection into the academy is competitive and rigorous. A committee of elected fellows reviews hundreds of applications, choosing fellows based upon their contributions in increasing access, reducing cost and improving quality through nursing theory, practice and science.

The cadre represents the most accomplished nurse leaders in education, policy and research. Of the 3.8 million registered nurses in the U.S., only 2,700 are fellows. They have been recognized for their expertise in policy, research, administration, practice and academia.