The generous gift creates the Biondi Chan Scholars Fund, which will support students from rural areas of China who require financial assistance to study at SLU. 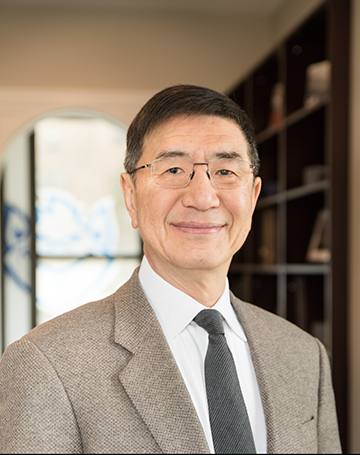 “As a university with a global reach, making SLU accessible to capable students from other countries is important to our future growth; Winston’s generosity ensures that,” said Sheila Manion, vice president of development.

The new scholarship is named in honor of President Emeritus Lawrence Biondi, S.J., who Chan worked with extensively on student recruitment and alumni engagement in Asia, and Chan’s father, Frank L. Chan, who he credits with giving him the opportunities that led to his success.

“Father Biondi’s global mindset has done good things for the University,” Chan said. “I think everybody should have a chance, and with this funding, we’ll be able to get really top-notch but underprivileged students to SLU.”

Raised in Hong Kong, Chan came to the United States to study as a high school senior at a Jesuit high school in Indianapolis. After graduating, he earned his Bachelor of Science degree in geophysics at Columbia University in 1977. He then came to SLU to complete graduate education degrees in the Earth and Atmospheric Sciences Department, earning a master’s degree and a doctorate in geophysics in 1981 and 1983, respectively. Chan is currently the chief executive officer of Corvusys, Inc., a financial services company headquartered in Virginia.

Long active within the SLU community, Chan has supported the University in multiple ways. He has given of his time, hosting on-campus receptions for international students and maintaining contact with SLU’s alumni clubs in China. In addition to the new Biondi Chan Scholars Fund, he has given generously as a donor, establishing a scholarship for students studying Earth and Atmospheric Sciences, graduate research fellowships in geophysics and seismology, and a fund supporting visiting researchers in seismology. He has privately funded tuition for three Chinese students as they pursued their degrees at SLU. Chan was awarded the College of Arts & Sciences Alumni Merit Award in 1998; he became a University trustee in 2007.

By creating a scholarship, Chan’s gift also supports one of the strategic priorities of Accelerating Excellence: The Campaign for Saint Louis University. The historic $500 million fundraising effort aims to propel SLU to national prominence as a distinguished research university through investment in scholarships, academic excellence, business education, health sciences and athletics.

“Winston values SLU’s legacy of academic excellence, and his generous gift allows us to provide a transformative, values-based education with global impact,” said University President Fred P. Pestello, Ph.D. “We are grateful for his counsel as a trustee and thankful for his support of the Accelerating Excellence campaign.”