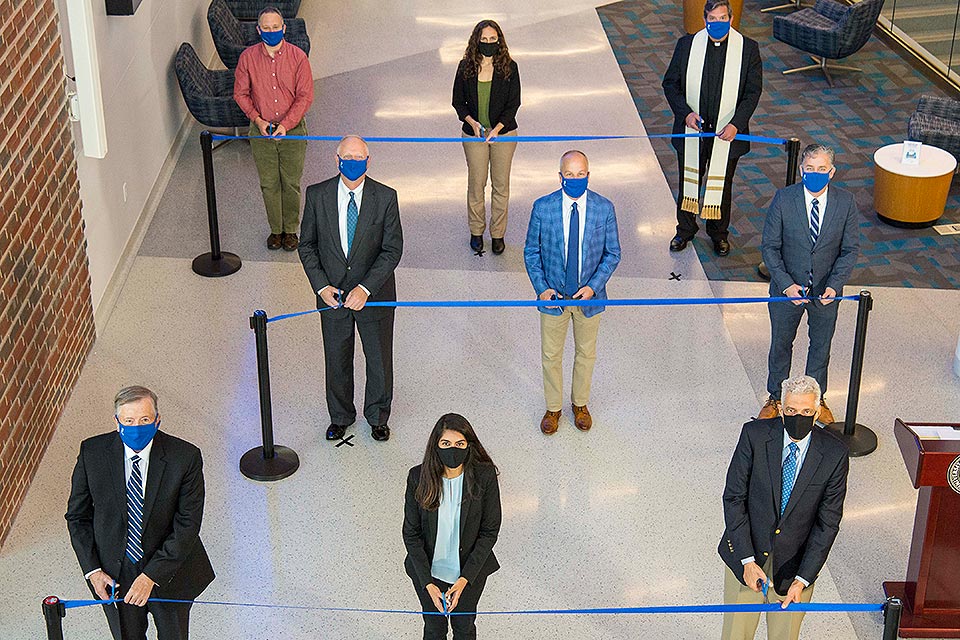 Members of the SLU community and the University’s project partners prepare to the cut ribbon. Photo by Kevin Lowder.

Joseph Conran (A&S ’67, Law ’70), chairman of the University’s Board of Trustees, called the state-of-the-art facility a “wonderful space” where students can learn and collaborate on their way to becoming SLU graduates who will seek to change the world.

“This is a very exciting day for Saint Louis University,” Conran said. “We’re going to bring a lot of phenomenal students to the community, and they will make a difference.”

During the live-stream, President Fred P. Pestello, Ph.D., said the building furthers SLU’s vision of being a global, Jesuit university — one that is mission-focused, student- and patient-centered, and research-driven; one that works with citizens in the region to reimagine, transform and unify St. Louis.

“This building is spectacular, and it was a long time in coming,” Pestello said. “But it’s only a building. It’s what takes place here today — this term — and for the decades to come that makes the difference in the realization of that vision.”

A Focus on Collaboration

“This really is a game-changer for the campus,” said Michael Goldwasser, Ph.D., chair of the Department of Computer Science. “Being surrounded with interdisciplinary science and engineering is really what makes this exciting.”

Sophia Izhar, a biology major and member of the Student Government Association, agreed. In her remarks, she said the building is opening at a time when collaboration is more important than ever as SLU seeks to form students who aspire to help people in underserved communities.

“This building calls for and encourages collaboration and integration across a number of different fields and disciplines,” Izhar said. “Collaboration is the only way to find solutions for the future that will uplift our city.”

A Catalyst for Interdisciplinary Research

Numerous research interests are represented in the building, including PATH (People and Technology Horizon), which focuses on humans and computers interacting in new ways.

“The ISE Building has catalyzed our collaboration, and our research enterprise is growing quickly,” said Terra Edwards, Ph.D., assistant professor of sociology and anthropology, who works on the PATH project.

Other research efforts that call the building home include SLU’s recently launched WATER Institute, the Center for Additive Manufacturing and the Walter J. Ong, S.J. Center for Digital Humanities.

In blessing the building, Vice President for Mission and Identity David Suwalsky, S.J., (Grad A&S '89, '10) noted that there have been many Jesuit scientists and researchers who were pioneers in their fields, including a SLU meteorologist who founded the nation’s second-oldest radio station, WEW (We Enlighten the World).

“As we gather this morning to dedicate and bless this marvelous interdisciplinary science and engineering building, we do so in the certain and profound belief that all God has created is meant for us to discover and then come to understand, so that SLU may continue to enlighten the world,” Suwalsky said.

Hastings+Chivetta designed the building, BSI Constructors Inc. served as general contractor. SLU’s Division of Facilities Services oversaw the construction project. Pestello and others praised everyone involved in ensuring the building opened on time despite the COVID-19 pandemic, including:

“Those entire teams worked tirelessly to finish this building,” said Interim Provost Michael Lewis, Ph.D., who served as the event’s emcee. “We had a fall semester to begin and they made sure it happened. So, thank you.”

Learn more about the ISE Building and watch the dedication event