Saint Louis University nursing students got a chance Monday to ask almost anything of the author of “The Jesuit Guide to Almost Everything.”

Students in Cristina McGroarty’s Spirituality and Healthcare class were treated to a conversation Monday with James Martin, S.J., author of “The Jesuit Guide to Almost Everything.” The class is reading Martin’s 2012 book while they explore their own spirituality as it pertains to their work in healthcare. 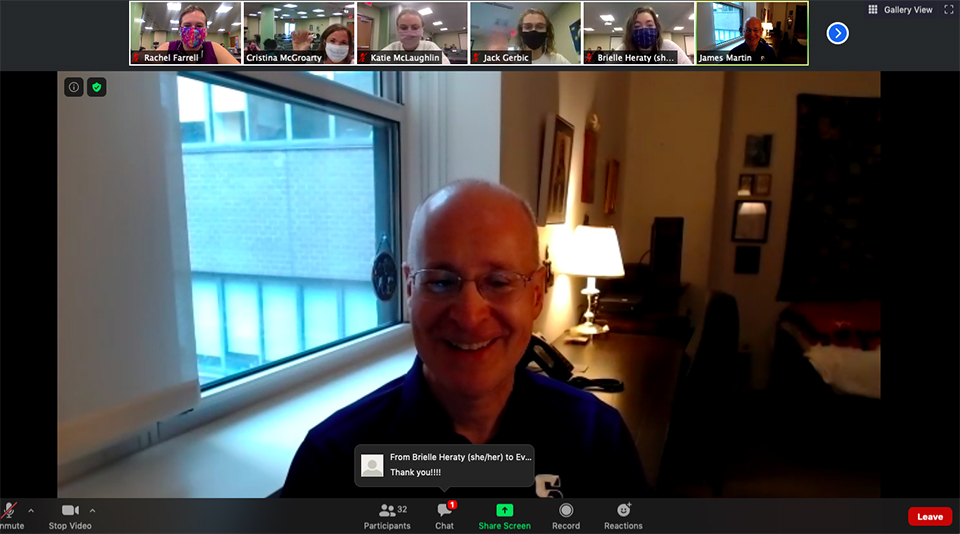 “I can’t say enough about Fr. Jim and what a joy it was to talk to him yesterday,” said McGroarty, an assistant professor in the Trudy Busch Valentine School of Nursing.

McGroarty is teaching Spirituality and Healthcare for the first time this semester to senior level nursing students. The in-person class meets on Monday mornings.

“I wondered if seniors would be game for an 8 a.m. Monday morning class,” McGroarty said, noting that most nursing electives are online this semester and the early morning slot fit the narrow time frame to hold a face-to-face class.

“I was so surprised when 31 seniors signed up to join me as we explore Ignatian Spirituality and its connection to our work as nurses,” she said.

McGroarty said she is a longtime fan of Martin’s and knew she wanted to use “The Jesuit Guide to Almost Everything” in her class. Martin has written several books on Ignatian themes. He served as SLU’s commencement speaker in 2012 and received an honorable doctorate in humane letters.

“His writing is smart, concise and very readable. He comes across as approachable in his books,” McGroarty said.  “He is witty, reverent and knowledgeable. He is also available on a variety of different media platforms. I hoped that the students would use social media and his many interviews to learn more about his explanations of Ignatian Spirituality.”

McGroarty said she talked through her ideas for the course over the summer with her friend Randy Rosenberg, Ph.D., dean of the College of Philosophy and Letters. As they talked about the book and how to engage Martin’s message, Rosenberg encouraged her to reach out.

“I was hesitant to do so thinking he would be too busy, but after my first class with the students it became obvious that they were really connecting with him,” she said. “They write weekly journals and from day one commented on how approachable and real he seemed to be and how accessible Ignatian Spirituality was becoming to them.” 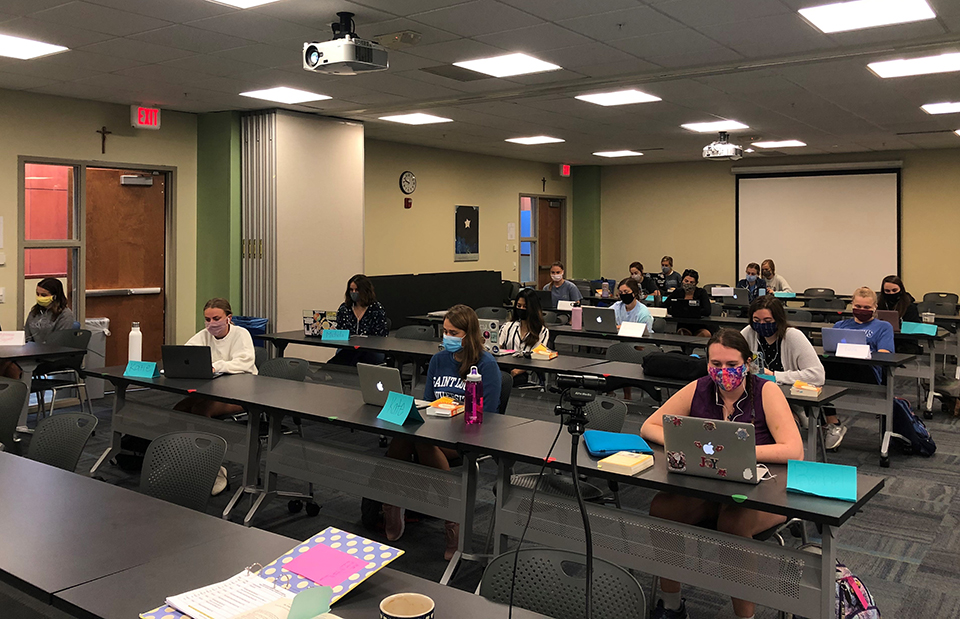 McGroarty emailed Martin asking him to speak with the students about his book and his experience as a Jesuit.

“I thought the likelihood of his reading my email was slim to none,” she said. “The next morning in my inbox was a reply that simply read, ‘that would be lovely. When and where?’”

Student Brielle Heraty had the opportunity to ask Martin a question about his time as a Jesuit novice. Martin wrote that he told his superior he would be happy to go anywhere but a hospital, to which his superior responded that a hospital is where he would go.

“I was able to ask Fr. Jim to elaborate on what this experience of serving in a hospital was like, especially for someone who is not oriented towards the health care field,” Heraty said.

Heraty said Martin drew on his experience of being a patient in a hospital while recovering from surgery and how he noted that “even the nurses’ attitudes were healing.”

“This is something that I will carry with me as I prepare to enter the nursing field this May. Nursing is not just about giving medications, changing wound dressings and giving bed baths – it’s a profession that calls us to be with our patients in the most vulnerable times of their lives,” Heraty said. “There may be days where I feel like no matter how hard I work, I am not doing enough for my patients. I now have this little piece of wisdom from Fr. Jim to remind me that having the right spirit is equally as important as the physical tasks I will perform to help my patients heal.”

Student Katie McLaughlin asked Martin about social justice and how he and other Jesuits respond to criticism of their support for marginalized groups.

“His response was simple - ‘there are certain social issues that people love to turn into political problems. But my response is always the same. Just read the Bible.’ He went on to say that we must care for all people and treat everyone with dignity and respect,” McLaughlin said. “He explained that the Black Lives Matter movement, the detainment of immigrants and refugees, and the LGBTQ+ community are not political issues at all. Jesus taught us that we are supposed to welcome and comfort those who are on the margins.”

James Martin, S.J.  is a Jesuit priest, editor at large of America magazine, consultor to the Vatican’s Secretariat for Communications, and author of numerous books, including the New York Times bestsellers “Jesus: A Pilgrimage” and “The Jesuit Guide to (Almost) Everything.” Among his other books, “My Life with the Saints” and “Between Heaven and Mirth” were named by Publishers Weekly as “Best Books” of the year, and three of his books have received Christopher Awards. Before entering the Jesuits in 1988, he graduated from the Wharton School of Business.