A professor in the College for Public Health and Social Justice and a member of Saint Louis University’s Class of 2024 have been named to St. Louis Magazine’s list of 35 St. Louisans working to build equity change in the region.

Rhonda BeLue, Ph.D., is the chair of the Department of Health Management and Policy. BeLue joined the College for Public Health and Social Justice in 2017 after more than a decade at Penn State. Her research centers around understanding the role of family in health and health care, chronic disease in low- and middle-income countries and immigrant health. She writes for both public health and health management audiences, seeking to use research to inform practice and policy. 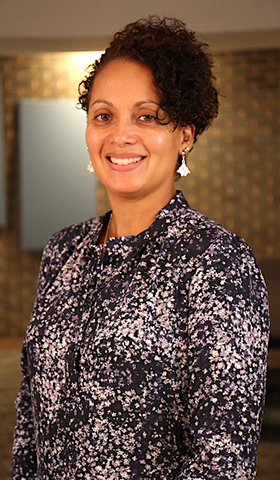 Born in Detroit, BeLue grew up in the San Francisco Bay area. Her father, a Vietnam War veteran, is a double amputee, and her late mother lived with the effects of a debilitating stroke.

BeLue earned a Ph.D. in health policy analysis and management and a master’s degree in statistics with a minor in epidemiology from Cornell University. She received a bachelor’s degree in biology from the University of New Mexico, Albuquerque.

BeLue told St. Louis Magazine she sees the many ways in which COVID-19 has shone a harsh light on America’s fragmented health care system. Economic and housing disparities mean communities of color have fewer opportunities to self-isolate and disproportionately suffer from hypertension, diabetes, breast cancer, and asthma.

“These previous health equity issues that result from segregation and socioeconomic issues and systemic racism are also playing out in COVID and exacerbating COVID deaths,” she told the magazine.

A freshman in the College of Arts & Sciences, Ryan Staples became known over the summer for the June 1 protest that he organized with his friend Jalen Thompson, a fellow Class of 2020 graduate of Fort Zumwalt West High School. The organizers expected maybe 200 people to show up for their protest in O’Fallon. Instead, more than 2,000 people, including O’Fallon Police Chief Tim Clothier, showed up to march with the teenagers.

Staples told St. Louis Public Radio that he and his friends wanted to show the community  that there is a real demand for change following the death of George Floyd. “I kind of just decided, I’m going to put a protest together to show that one, there is a real demand for change, and two, that it’s not a police versus black person thing, it’s an injustice versus humanity thing,” he said.

“I knew that we were doing something for the good of the community,” Staples told St. Louis Magazine. “And I was so happy that we were able to share it with the world.”

Staples is currently leading a young voter registration drive while working with national organizations to enact police reforms. He plans to major in political science and one day become a civil rights attorney.