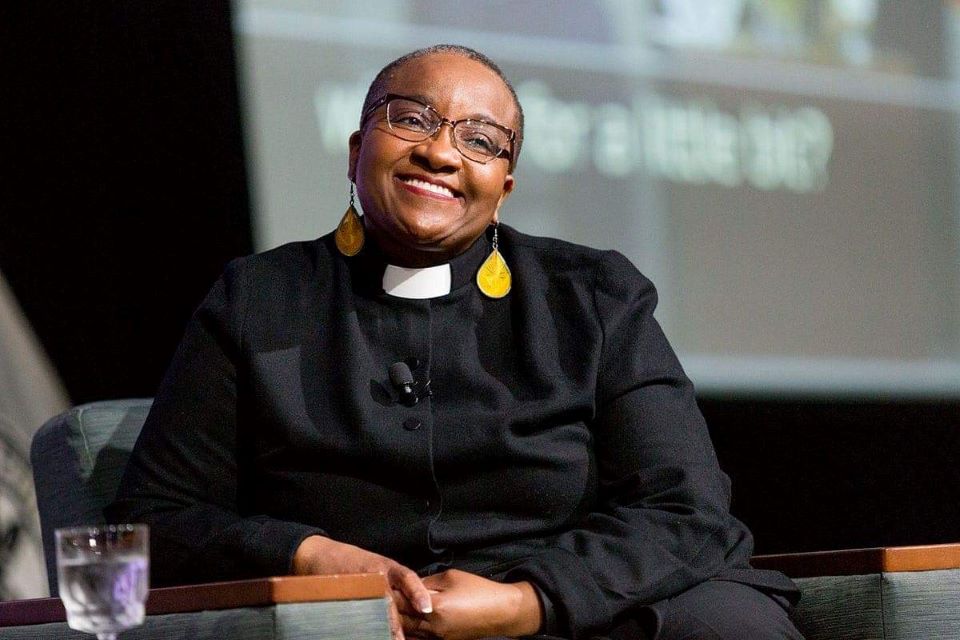 Rev. Tutu shared her experiences as a woman, as a member of the clergy and as a Black mother of a Black son and asked the audience to ask themselves what it would look like to live in a country and a world where racism is not a part of our daily lives.

Being anti-racist is an on-going effort, Rev. Tutu said, and should involve everyone.

“It cannot be the job of Black, indigenous people to do this work,” she said. “We have been doing this work and we will continue to do this work, but the responsibility cannot lie on us. Dismantling racism has to be out on the societies that put racist structures into place.”

Tutu said she turns to her faith when she is challenged to understand the world around her.

“For me, the struggle for justice is a part of dealing with the world God created,” she said. “If God once looked around and saw good, there is no reason it cannot be good again. I want to be a part of those who work toward that.”

That means actively working for a better world for her children and remembering all those who went before her, like the many South Africans who fought against apartheid practices while recognizing that change may not happen in their lifetime.

“They still fought for human dignity,” she said.

In an interview following her keynote address, Rev. Tutu said she hoped that SLU students saw during Atlas Week that they can make positive changes in the world.

“Recognize your power and look for opportunities to talk to a friend, your family, your church or your University,” she said. “Believe you can make a difference, every day, where you are to be part of change and equity. Take the first step and believe in what you have to offer the world.”

Rev. Tutu is the third child of Archbishop Desmond and Nomalizo Leah Tutu. She was born in South Africa and had the opportunity to live in many communities and countries. She was educated in Swaziland, the United States and England, and has divided her adult life between South Africa and the U.S.

She served as Program Coordinator for the historic Race Relations Institute at Fisk University and was a part of the Institute’s delegation to the World Conference Against Racism in Durban.

As well as speaking and preaching, Rev. Tutu has established Nozizwe Consulting. The guiding principle of Nozizwe Consulting is to bring different groups together to learn from and celebrate their differences and acknowledge their shared humanity. As part of this work, Rev. Tutu has led Truth and Reconciliation Workshops for groups dealing with different types of conflict. She has also offered educational and partnership trips to South Africa for groups as varied as high schools, churches, hospices, K-12 teachers, and women’s associations.