Saint Louis University and members of the Jesuit Central and Southern Province celebrated the groundbreaking Tuesday of a new Jesuit Center. 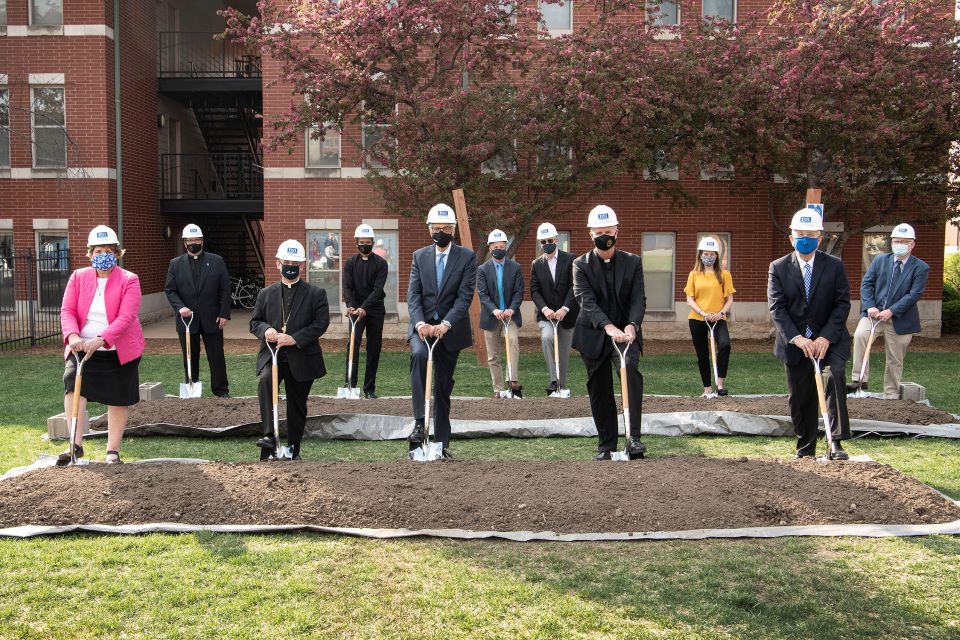 University leadership, construction partners and faith leaders from the Jesuit Central and Southern Province and the Archdiocese of St. Louis at the groundbreaking for the Jesuit Center. Photo by Steve Dolan.

The new Jesuit Center will house the second community and create a space for enhanced interaction between SLU’s Jesuits and the wider community. University President Fred P. Pestello, Ph.D., noted the frequency at which he hears from alumni about Jesuits who were important to them during their time at SLU and beyond.

“Today we gather to build this Jesuit Center so that people can continue to gather as we are gathered,” Pestello said.  “It is certainly designed to house those men, but will also be a place where our students, our faculty, our staff, members of the community and others can gather to talk about how to fulfill that mission and celebrate this sacred faith at the center of who we are. This is a special moment.”

Bishop Mark Rivituso of the Archdiocese of St. Louis gave the invocation at the event. He said the new Center “will be a visible sign of the many ways in which the Saint Louis University Jesuits accompany all faculty, students, staff and alumni in living out the University’s mission.”

Bo Mehan, vice chair of SLU’s Board of Trustees, echoed the Bishop’s words and said the new building would be a constant reminder to the SLU community to “rely on our faith and our Jesuit charism, as we navigate, like Pope Frances, in our complex, polarized society.”

She noted that in its 203-year history, roughly a quarter of a million graduates have gone out into the world to fulfill the mission of the University.

“Think of all the truth and the glory to God and service to humanity generated by that quarter of a million graduates - the teachers, the scientists, the doctors, the social workers, the entrepreneurs, the accountants, the nurses, the engineers, the lawyers and all the graduates over that 203 years. It is both amazing and humbling.”

David Suwalsky, S.J., vice president of mission and identity at SLU, served as master of ceremonies for the small gathering, which was also livestreamed on Facebook. Following a blessing by Thomas Greene, S.J., provincial superior for the Jesuits USA Central and Southern Province, the construction site was sprinkled with holy water.

The facility will have 20 bedrooms for SLU Jesuits and five for guests. It will also have a chapel, dining space and meeting rooms. The chapel will be visible from the West Pine Mall. The project is similar to Jesuit residences built recently at Loyola University Chicago and Marquette University.

The project will take 18-20 months to complete. The facility was designed by HKW Architects and BSI Constructors Inc. will serve as general contractor.

The University has launched a fundraising campaign to help pay for the project. In addition, the proceeds from the pending sale of Jesuit Hall will be applied to the expense of the new residence.