The Justice Fleet was awarded $23,000 to continue its mission of building intentional healing spaces in the community as a part of the St. Louis Regional Racial Healing + Justice Fund’s inaugural group of community grants.

“As racial injustices continue to re-traumatize St. Louis citizens and strengthen racial and economic divides, it is imperative that we find the time to grieve and heal through those injustices,” said Amber Johnson, Ph.D., (A&S ’01, Grad A&S ’03) associate professor of communication and social justice at Saint Louis University, who uses they/them pronouns. 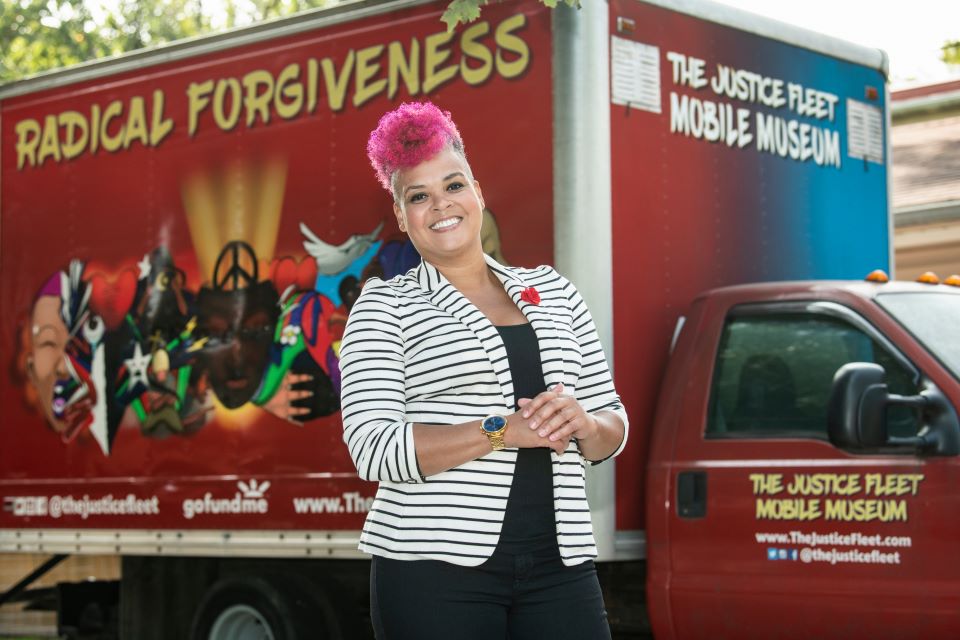 Johnson is founding director of the Justice Fleet, a mobile, social justice, pop-up museum that fosters communal healing through art, dialogue, and play. They said funds will be used to launch a grief garden in north St. Louis City along the Hodiamont Tracks.

“Considering the lack of parks on the north side and racial trauma everywhere,” Johnson said, “it’s an ideal place to house the permanent grief garden and can bridge the Delmar divide.”

Through horticulture therapy and conservation, the grief garden will serve as a safe, public, green space for people experiencing systemic injustice to grieve and heal. There are also plans to include a mobile experience primarily targeting minority neighborhoods throughout the St. Louis metropolitan area. Both will incorporate activities that can be done in isolation or in a group setting. It is now the fourth interactive exhibit the Justice Fleet operates since its launch in 2017.

“While grief is most often connected to the loss of a loved one, racial-induced trauma also causes grief regardless of the proximity to the victim or community,” Johnson said. “When Black death is sanctioned by the state, community members grieve the unjust systems that cause oppression, mourn the loss of Black life and death, and fear for their own safety and survival.”

The Robert Wood Johnson Foundation supported the launch of the Fund with a matching grant. SLU’s Institute for Healing Justice and Equity (IHJE) is one of 17 local and national foundations that have joined the pool of participating organizations. The Justice Fleet is housed under the IHJE, an initiative Johnson co-founded which launched last year.

About the Institute for Healing Justice and Equity (IHJE)

A multidisciplinary group of faculty have formed the Institute for Healing Justice and Equity at Saint Louis University, an initiative that has the potential to transform SLU into the epicenter of equitable community building and knowledge curation related to healing from social injustice, trauma and oppression.