Thanh-Mai Vo, M.D., an associate professor of nephrology at Saint Louis University School of Medicine and a SLUCare nephrologist, was named one of the St. Louis Business Journal’s “Most Influential Business Women” of 2021. 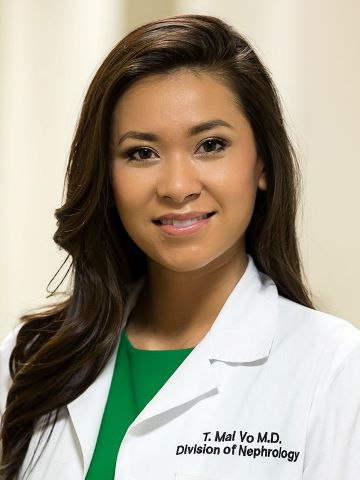 The Most Influential Business Women awards, established in 1999, annually recognizes the accomplishments of the region's women business leaders.

According to the Business Journal, the 25 women honored this year have made an impact in the industries in which they work and at local nonprofits in the communities they represent.

Vo was nominated for the Business Journal honor by her sister, Mimi Vo, a physician who practices with their father in a family clinic. The Vo sisters are third-generation physicians, following in the footsteps of their father and grandfather.

Thanh-Mai Vo has been the program director of nephrology at SLU for four years. She calls working with the fellows the fun part of her job.

“It’s not just working on the curriculum but finding ways to make sure they are getting the best training possible,” she said. “I want them to have a good learning environment. Any trainee can pick up a book and read – I want the entire experience to be nurturing so they can learn.”

Vo said she thinks of the relationship in many ways as momma duck with her ducklings. Learning about her trainees and their personal lives allows her to do her job with love and compassion.

“It’s reaching the deeper level so they know how to work in a team,” she said. “They have to rely on their fellow trainees. That is easier to do when you are friends and know where everyone is coming from.”

She believes caring starts at the top. She cited Kevin Martin, M.D., the Clara A. Drefs Professor of Internal Medicine and division director, for creating an atmosphere where mental health and wellness are as important as learning and healing.

“He has been such a mentor to me – I told him I want to learn from him forever,” she said. “Creating a happy learning environment has a ripple effect that impacts patient care and all we do.”

Vo doesn’t only work to educate her fellows. She views educating patients as one of her most important jobs.

“It is so important that we take care of our patients first as humans – we need to be aware of their bodies, but also their minds and spirits,” she said. “They aren’t their disease.”

As an example, Vo said she had a patient who hadn’t been taking her medication. Instead of writing the women off as non-compliant, she sat down to find out why. Talking to the patient revealed the women’s food insecurity. Her medication couldn’t be taken on an empty stomach so she was only taking her meds on days she had access to meals.

“Taking the time to have the conversation allows me to really treat the patient,” she said.

The Webster Groves native said she knew in college that she would want to come back to the region and her residency and fellowship at SLU confirmed that she wanted to remain here.

“There aren’t many interventional nephrology programs and SLU is one of them,” she said.

Vo serves as co-president of the St. Louis Vietnamese American Medical Association. The Association began in 2019 and includes physicians, nurses, pharmacist and health care technicians. She also works with the National Kidney Foundation and is involved with the Lupus Foundation.

Vo, along with other honorees, will be recognized in the St. Louis Business Journal on Aug. 13, and at an in-person luncheon the same day.

SLUCare Physician Group is the academic medical practice of Saint Louis University, with more than 500 health care providers and 1,200 staff members in hospitals and medical offices throughout the St. Louis region. SLUCare physicians are among the most highly trained in their fields – more than 50 specialties in all – and are national and international experts, renowned for research and innovations in medicine. For more information, visit us at www.slucare.edu.