Ronny O’Dwyer, S.J., assistant professor in the School of Education, will take a leave of absence from Saint Louis University to become the interim president of De Smet Jesuit High School.

De Smet announced Tuesday afternoon that O’Dwyer received a unanimous vote of approval from the school’s board of trustees. The appointment will run for 12-18 months. During that time he is expected to work with faculty, staff, parents, students and alumni to find the next president. 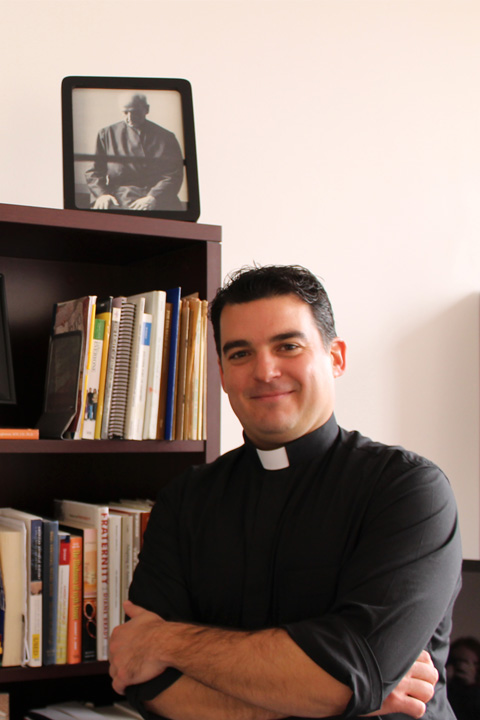 “Our faith is the greatest gift that we have,” O’Dwyer said. “And handing on this faith that has been entrusted to us is the center of Catholic, Jesuit education. We know that our faith is caught, in as much as it is taught. Which is why at De Smet Jesuit we’ve always put such an emphasis on community – building a community where the vision and values of the Gospel are our starting point, our guiding light, and the measure of our success. It’s only within a community that can we achieve the lofty goal set before us by Fr. Arrupe: to be men and women for others.”

O’Dwyer is not leaving SLU. Gary Ritter, Ph.D., dean of the School of Education, said O’Dwyer will be taking a leave of absence and will remain a faculty member.

“This is a wonderful and timely opportunity for Fr. Ronny,” Ritter said. “He’s recently been discerning his future plans, and leadership is certainly one potential path for Ronny. While he has certainly been a leader in the School of Education, the opportunity at De Smet will require him to jump quickly into a bigger and more impactful leadership position.”

Ritter said O’Dwyer will be missed during his time away.

“We will certainly miss his daily presence here in the School of Education — his infectious enthusiasm, his great sense of humor, and the steady support he provides to all of his colleagues,” Ritter said. “We love having him around and we are very glad that this is only a leave of absence.”

“While we will certainly feel Fr. Ronny’s absence here at SLU, I am proud that our Jesuit secondary schools look to the School of Education for leadership during difficult moments,” Ritter said in a note to faculty announcing the move. “This will further strengthen our relationships with schools in our region. And, in my opinion, we should all be proud to be colleagues and friends with Fr. Ronny, who is courageously taking on this challenging and important position at this time.”

O’Dwyer will take over at De Smet in January 2022. He is no stranger to De Smet having served as a theology teacher and an assistant for student activities from 2009-2012.

“I’ve been given many gifts during my Jesuit life. Among the greatest of these has been the chance to teach at De Smet,” he said. “After I was ordained a priest in 2015, I returned home to celebrate a Mass of Thanksgiving in gratitude for the De Smet community that nourished my vocation.”

At SLU, O’Dwyer had been the Assistant to the Dean for Catholic School Initiatives and an assistant professor in Saint Louis University’s School of Education. Prior to this work, he was the director of the Billiken Teacher Corps from 2016-2020.

Since his ordination as a Jesuit priest in 2015, Fr. O’Dwyer has been invited by many Spartan alumni to share in significant moments in their lives, including baptisms, weddings, and funerals.

O’Dwyer is expected to complete a doctorate in Educational Leadership and Policy from Vanderbilt University in May 2022. He has an M.A. in Catholic Educational Leadership and an M.A. in Philosophy from Saint Louis University; and a Master’s in Divinity and an ecclesial degree from Boston College. He received a B.A. in Philosophy from The Catholic University of America.