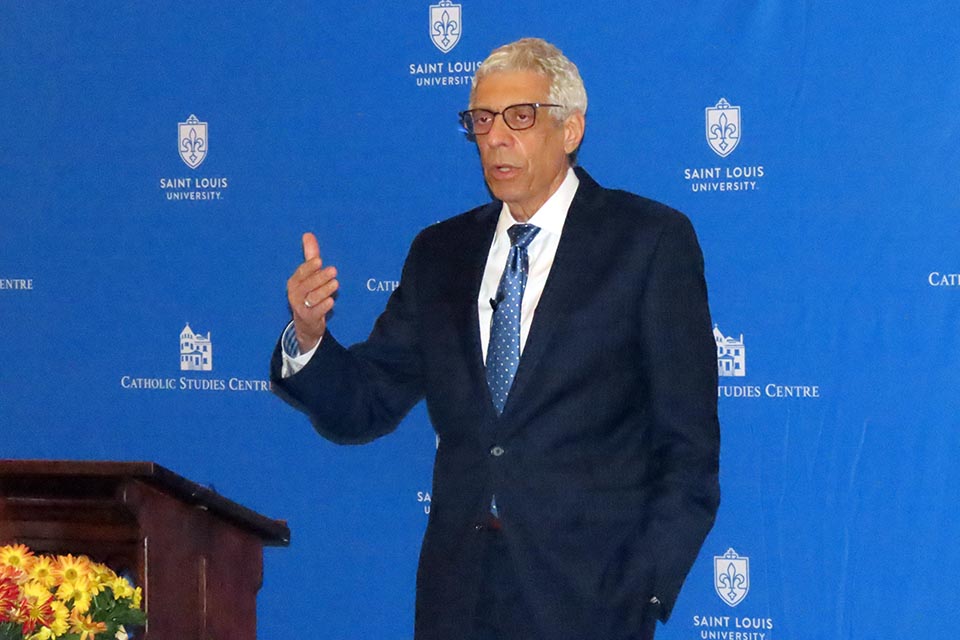 The award is named after Campion, the 16th century English Jesuit martyr who was a distinguished scholar of Classics at Oxford University. Baugh said the award was created to recognize anyone who supports a deep engagement with Catholic culture.

Baugh said the awards committee selected Pestello for two reasons — Pestello’s support of the “the largest and most active” Catholic Studies Center among Jesuit institutions and the “astute and caring way that he led SLU” during the COVID-19 pandemic.

In the summer of 2020, while other universities decided not to return to campus for the fall semester, SLU made plans to have students return to campus in August. Baugh praised that decision.

“Guided by his conviction that community and physical presence are essential elements of a Jesuit education, Dr. Pestello harnessed all the creativity and expertise of SLU’s administration to find a safe way for us to study once again in person,” Baugh said. “It was a courageous decision. It was a pastoral decision and it’s a decision that I’m convinced we will look at very fondly in years to come.”

In addition to his leadership on COVID, Baugh noted the transformation of the Catholic Studies Center during Pestello’s tenure. The current Center used to be a residential home. When President Emeritus Lawrence Biondi, S.J., relocated to Chicago, the building was vacated and its future use was debated.

Pestello decided to use the building to be the home of a new center dedicated to Catholic studies.

“This decision to create a space on campus for the fostering of Catholic culture — and indeed to give it a prominent place in one of SLU’s most historic buildings was the most critical step to building a program that has not stopped growing ever since,” Baugh said.

Pestello called the award an honor and said he was humbled by the recognition. After receiving the award, Pestello delivered a lecture titled “For and With Each Other.” The lecture focused on the University’s journey with the COVID-19 pandemic and the lessons learned along the way.

Pestello opened his remarks by saying all of the accomplishments that have occurred during his tenure at SLU are the result of a collaborative effort.

“No one in a position like mine accomplishes anything of substance alone,” he said.

That collaboration was how SLU was able to navigate the COVID-19 pandemic successfully, he said. The pandemic uprooted nearly everyone and everything. Everyone has been impacted by COVID, he said.

Across the nation, faculty and staff at universities lost jobs in the wake of the pandemic. That didn’t occur at SLU.

“It did not happen here because of how the people at SLU responded,” Pestello said.

The University tightened its belt and made other cuts in order to prevent layoffs, he said. Pestello praised the people of the University for quickly and adroitly adapting to the changes brought on by COVID. The University kept on running at a high level because of the people, he said.

Being remote wasn’t a long term solution. Pestello said he believes we are social beings who need to be together. That message was reaffirmed when students shared their struggles with being away from campus and out of classrooms.

Heading into the Fall 2020 semester, Pestello said “the distinct SLU community of daily interactions and rituals had to be restored as quickly as closely as possible.” He said leadership realized it had to do whatever it took to get students back on campus. SLU made the changes to make this possible.

Pestello reflected on the lessons of the pandemic. One of the lessons learned — every voice matters. Pestello talked about how important the diverse voices with which he surrounded himself were in handling the pandemic. The University’s leadership group expanded and included new voices versed in infectious diseases and public health. Student voices also were crucial in the University’s COVID response.

“Each person at the table, including students, is equally valued,” he said. “Everyone’s contributions are essential.”

Everything came together in the Fall of 2020 when students returned. The experts made plans on how to successfully be back on campus and everyone followed the plan. There was no outbreak and the result was a successful semester, Pestello said.

“The students joined the others on campus and made the sacrifices necessary to live in a learning community,” he said. “The commitment of our students to live our mission made the success possible. They wanted to be on campus, they made that clear, and they knew that meant sacrifices. They embraced them and did the right things.”

Pestello closed his remarks by focusing on the future. He said the University will do what is needed and strive to reach those goals.

“I have watched us repeatedly come through difficult times,” he said. “Over the course of my tenure here we’ve had more challenging moments than I care to remember. In each case, what has carried us through, is locking arms and moving forward as one SLU.”