Saint Louis University, along with Loyola University Maryland and University of San Francisco, honored the life of Dr. Martin Luther King, Jr. in a virtual event. Starsky D. Wilson, president and CEO of the Children’s Defense Fund, served as the keynote speaker. 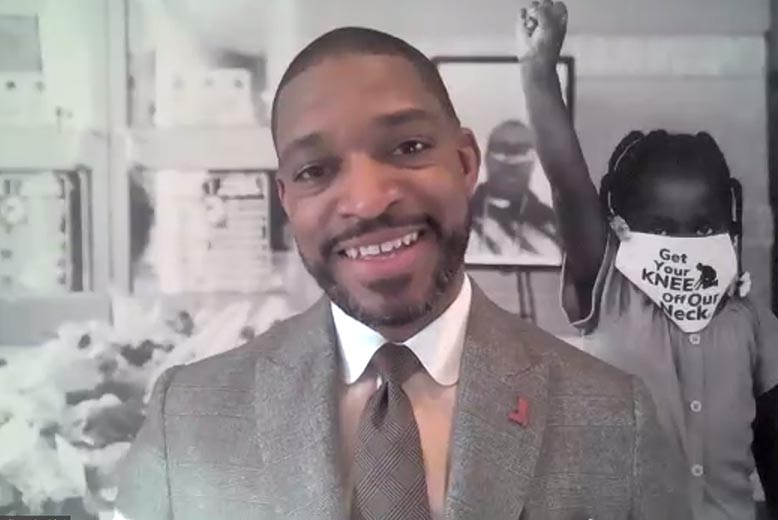 Jonathan Smith, Ph.D., vice president for diversity and community engagement at SLU, welcomed attendees and honored guests, and he thanked sponsor Ameren for their continued support.

“Our Jesuit mission compels us to be co-workers with God on issues of poverty, discrimination and violence,” Pestello noted.

The theme for Wilson’s speech was “Walking with the Excluded / Accompanying Young People in the Creation of a Hope-Filled Future.”

In his address, Wilson spoke about his hope for young people.

“It is not just about the potential and the power of revival in journeying with youth for one person. It is also the potential and the power for us as a nation,” Wilson said. “As we look around at this moment seeking to put back together the shattered pieces of the American dream, it is this generation, the 74 million children under the age of 18, the 30 million young people under the age of 15, who represent the best hope and possibility.

“Not only will they transform us, they will transform this nation if, and only if, we are willing to walk with the excluded and journey with our youth.”

In addition to giving the keynote address, Wilson also was honored with the first Norm White award, named for SLU’s pioneering criminologist Norman A. White, Ph.D. White was an activist and scholar, leading SLU’s Overground Railroad to Literacy Project and Shut It Down: Closing the School to Prison Pipeline.

“I must say thanks to the family of Saint Louis University for honoring me with this award named for Norm White,” Wilson said. “Dr. White was an inspiration to me, a partner in work around youth violence prevention in the St. Louis Metropolitan Community, an abolitionist in every sense of the word, before we came to understand it.”

Mary Elizabeth Grimes, president of Marian Middle School in St. Louis, was hired in December 2013. She has more than 20 years of experience leading both for-profits and nonprofits through successful growth and transition.

Prior to becoming the president at Marian, Grimes served as state director at the Greater Missouri Chapter of March of Dimes where she transformed the declining chapter into a sustainable and operationally efficient organization.

She has also held other leadership positions, including president of Forward Vision, a brand management consulting firm; director of marketing for BJC Healthcare; director of development at Fair St. Louis; and executive director of Elite International Sports Marketing and Management.

A 2003 graduate of Loyola, O’Keefe began working at Loyola in 2010 as founding director of the university’s York Road Initiative, a place-based community development initiative.

Previously, O’Keefe worked in community affairs for Johns Hopkins University, as a research assistant for housing and redevelopment policy in the department of public policy at UMBC, and in community services management at Catholic Charities of Baltimore.

She has a bachelor’s degree in political science from Loyola, a master’s degree in public policy from UMBC, and is currently working on her Ph.D. dissertation in urban policy at UMBC. A past member of Loyola’s Board of Trustees, she lives in Baltimore City and serves on the board of directors for GEDCO, the Place-Based Justice Network and Mid-Atlantic Campus Compact.

James Spingola is the executive director of Collective Impact. Spingola was born and raised in San Francisco’s Fillmore District.

From an early age, Spingola became attracted to the opportunities available to young, impressionable men in his neighborhood, which ultimately led to his incarceration. Defeating the odds after several tries, Spingola took a fruitful path to reentry, working three jobs – one at Ella Hill Hutch Community Center, which would prove life-changing – and then landed a position at a local hospital.

He focused on helping the community, mentoring young men and women struggling with the same issues and poor choices that he had. In recognition for his providing quality support and services since 2004, in October 2018 Spingola was appointed to the Juvenile Probation Commission of the City & County of San Francisco. Spingola, known as “Uncle” to many, understands the connection that young people are craving; his approach is centered around ensuring those critical connections are in place. Knowing his own successes are tied to someone taking a chance on him, Spingola extends that same courtesy to every person who comes through the doors.