On Monday, June 14, Saint Louis University hosted an event that marked a milestone in the region’s pandemic response. 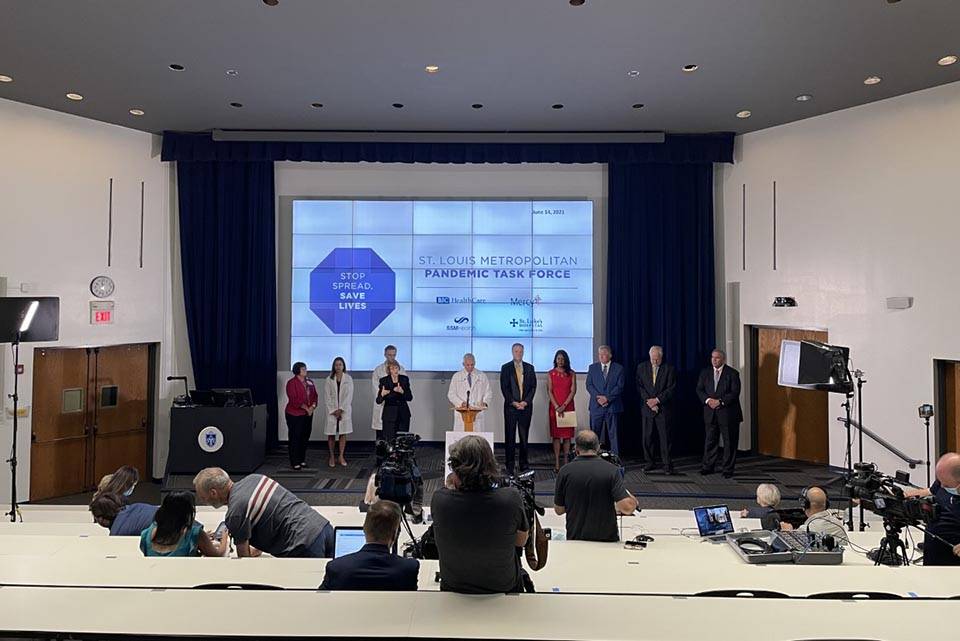 With COVID-19 hospitalizations at their lowest levels since the spring of 2020, members of the St. Louis Metropolitan Pandemic Task Force said thank you to health care workers and the entire St. Louis region at their final media briefing.

Though the task force plans to continue to share data about COVID-19 cases in the region, they will no longer schedule regular media briefings.

“I want to be very clear that the pandemic is not over,” said Incident Commander Alexander Garza, M.D. “But we’re entering a new phase. One that we’re able to manage more effectively and safely than we were able to when the virus was raging.”

The task force is made up of the region’s four major health systems, including SSM Health, BJC HealthCare, Mercy and St. Luke’s Hospital.

“A little more than 14 months ago, the St. Louis Metropolitan Pandemic Task Force was established to help us prepare for a once-in-a-lifetime challenge: A largely unknown, highly contagious virus that led to widespread death and destruction,” said Garza.

Garza revisited the graphs and data points that told the story of the pandemic’s toll locally, acknowledging the loss of more than 2,000 lives in the St. Louis region.

The tide began to turn with the arrival of safe and effective vaccines, two of which were tested at Saint Louis University’s Center for Vaccine Development, where Phase 3 trials for the Moderna and Johnson & Johnson vaccines were conducted.

“The arrival of highly effective vaccines and exceedingly safe vaccines has completely changed our fight against the virus,” said Garza. “When we began to vaccinate people in large numbers we saw a dramatic decline in admissions and deaths. It was during that period that we were no longer playing defense and went on offense. The power in the pandemic had shifted.

“As of today, close to 1.8 million doses have been administered in our region. Just over 1 million have received one dose and 800,000 have completed both doses. So yes, we’ve come a long way.”

The event concluded by recognizing the many health care providers who sacrificed and served the community during the pandemic.

“Health care workers across the region have been on the front lines of this war from day one and they willing put their own lives at risk to care for patients during this unique public health crisis,” said Garza.

“They choose compassion over convenience. They chose service over safety. They cared for thousands of patients who ultimately lost their fight with COVID and they did it with dignity and grace and determination. These health care professionals helped tens of thousands of patients live and recover.”