Saint Louis University has been awarded a $2 million grant from the J.E. & L.E. Mabee Foundation toward the construction of the Jesuit Center, a new, $16 million residential facility for Jesuit priests located on SLU’s north campus. 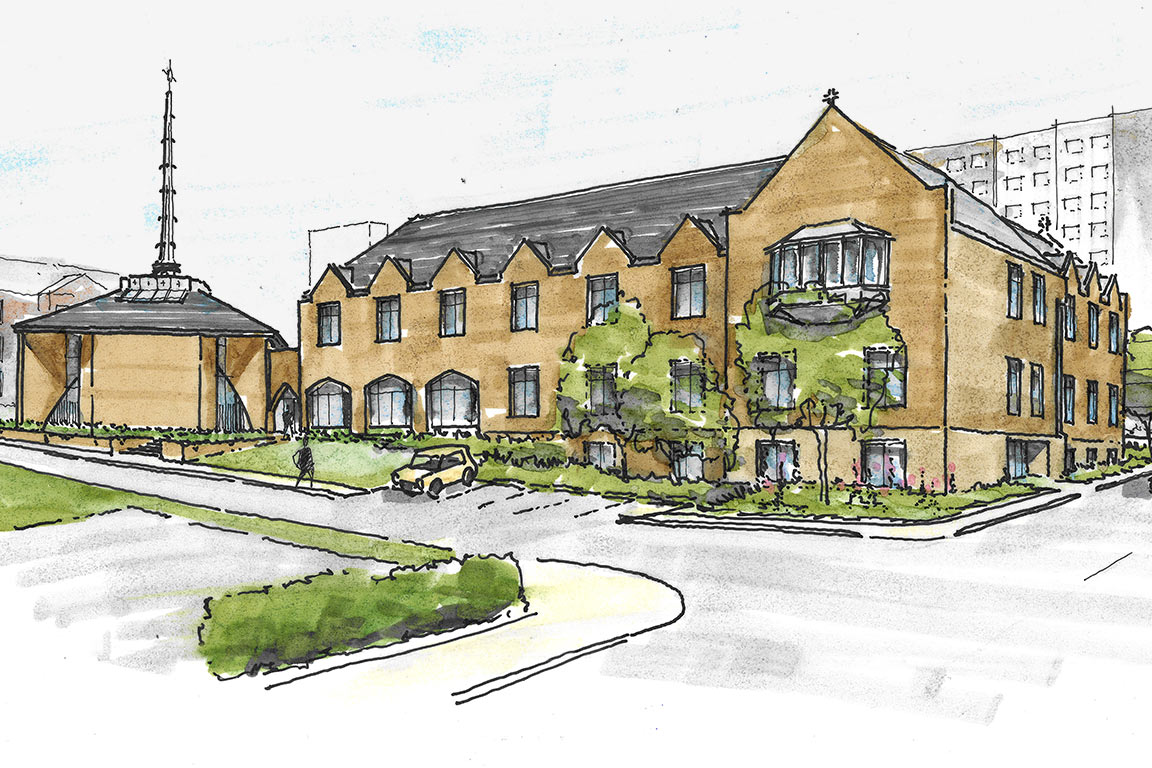 To date, the University has raised $8.5 million of the center’s estimated $16 million cost. The Mabee Foundation grant is contingent upon SLU raising the remaining $5.5 million needed to complete the project and serves as a challenge to others meet this goal.

A collaboration between the University, its Jesuit community and the leadership of the Jesuit Central and Southern Province, the new Jesuit Center will be located on the north side of Laclede Avenue, just west of Spring Avenue. The facility will have 20 bedrooms for Jesuits and five for guests. Intended to also serve as an apostolic center, the center will feature a chapel, dining space and meeting rooms where Jesuits can gather with students, faculty, staff, the wider St. Louis community and Jesuits from across the nation. The project is similar to Jesuit residences built recently at Loyola University Chicago and Marquette University.

The Mabee Foundation funds new construction, building renovations and the purchase of major medical equipment, and limits its grants to brick-and-mortar projects located in Texas, Oklahoma, New Mexico, Arkansas, Missouri and Kansas. It was formed in 1948 by Missouri natives and Oklahoma residents John and Lottie Mabee. The couple also wanted to encourage others to give, and so crafted the foundation grants as challenge grants that both require and inspire widespread public support.

The forward-thinking policies and parameters of John and Lottie Mabee became the catalyst for the exponential raising of more funds from a broad pool of givers for Mabee Foundation grantees. Since its inception, the Mabee Foundation has grown to a value of over $1 billion and has made grants totaling over $1.2 billion. In 2005, the foundation awarded SLU a $1.5 million grant toward the construction of the Doisy Research Center.

“I am grateful that the Mabee Foundation has once again expressed its support of Saint Louis University,” said Vice President for Mission and Identity David Suwalsky, S.J. “This challenge grant not only encourages SLU to reach out to our benefactors in support of the Jesuit Center but also confirms our many successes as a university, especially in this year of pandemic. The Jesuit Center will affirm the SLU community’s commitment to its Catholic and Jesuit mission as well as support a vibrant and active Jesuit community of professors, pastors and administrators for decades to come.”

Since 1973, SLU Jesuits and other members of the Society of Jesus have resided in Jesuit Hall, located at the corner of Lindell and Grand boulevards. In 2020, former Jesuit Provincial Ronald Mercier, S.J., confirmed a plan to create two new communities from Jesuit Hall: One designed for retired Jesuits and those who need medical support, and the second for Jesuits missioned as professors, pastors and staff members at the University.

The new Jesuit Center will house the second community and create a space for enhanced interaction between SLU’s Jesuits and the wider community. The project broke ground in early April 2021 and will take 18 to 20 months to complete. The facility was designed by HKW Architects and BSI Constructors Inc. will serve as general contractor.

For information about making a gift to the Jesuit Center, contact Sheila Manion at Sheila.Manion@slu.edu or 314-977-2306.