A proposal by Steven Skaggs, a graduate student in chemistry at Saint Louis University (SLU), was recently selected for funding by the Future Investigators in NASA Earth and Space Science and Technology (FINESST) program. Paul Bracher, Ph.D., assistant professor of chemistry at SLU, said this is an exciting accomplishment for a first-year graduate student.

“Only 12% of proposals were selected from an elite group of talented students, which is a testament to the strength of his proposal,” Bracher said of Skaggs. 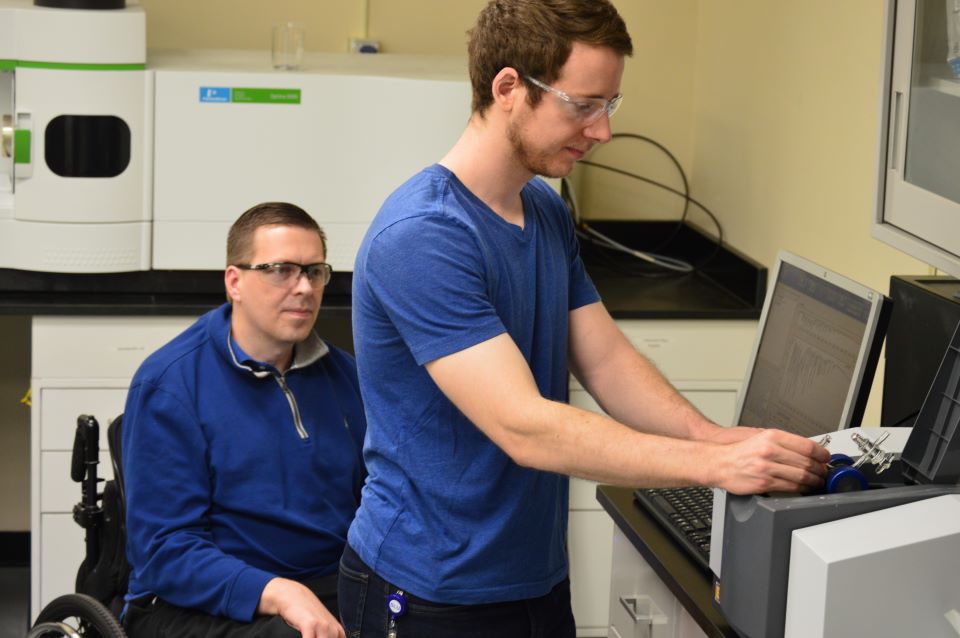 FINESST received 835 proposals. Skaggs’ proposal, “Organic Deliquescence and Chemical Evolution on Hydrocarbon Worlds,'' was one of 32 proposals selected by the Planetary Science Division in the Science Mission Directorate (SMD).

The three-year grant totaling $125,986 will fund Skaggs’ research, as he joins the Bracher Group’s continued quest to uncover the possibility of life originating on Saturn’s largest moon, Titan. Skaggs said his research will investigate chemical reactions in an environment with controlled organic humidity designed to mimic Titan’s atmosphere. Skaggs was drawn to this research because it presented an opportunity to deepen his critical thinking skills and solve complex problems, he said.

FINESST grants are for student-designed research projects that contribute to SMD's science, technology, and exploration goals. In 2019, NASA announced the agency’s next mission to launch a rotorcraft-lander, or miniature helicopter, to Titan’s surface in 2027.

“A goal of this project is to generate some ideas of what a mission like Dragonfly should look out for to gauge early signs of life,” Bracher said. “We know what that might look like on Earth, but what would that look like on a terrestrial body that’s covered with hydrocarbon solvent instead of water?”

Bracher compares the experience to the excitement surrounding the Apollo mission to the moon in the 1960s. Titan is the next big thing in terms of planetary organic chemistry, he said.

Bracher notes SLU students have applied for similar grants in the past. FINESST is a relatively new program that replaced the NASA Earth and Space Science Fellowships in 2019. SLU alumnus Thomas Campbell, Ph.D., (A&S Grad ’18) won a NASA Earth and Space Science Fellowship for the 2017-2018 academic year for his project, “Prebiotic Chemistry in Hypersaline Aqueous Media Encountered on Terrestrial Planets.” Campbell’s proposal was one of 33 awards NASA selected after receiving 197 applications from students across the nation.

Following graduation, Skaggs strives to instill a love of science into the next generation by becoming a high school science teacher.

“I found that I enjoy helping others learn and grow,” he said. “I’m excited to give back.”