In February, a Zoom court hearing derailed when Rod Ponton appeared as a kitten. It was the purrfect storm for the Texas lawyer whose viral technological debacle now serves as a comical — and forever archived — lesson on how not to use Zoom filters.

“Mr. Ponton, I believe you have a filter turned on in the video settings,” said Judge Gibbs Bauer of the 394th Judicial District Court in the video. Like a deer caught in headlights, Ponton as a wide-eyed kitten responded, “It is and I don’t know how to remove it...I’m prepared to go forward with it. I’m here live. I’m not a cat!” 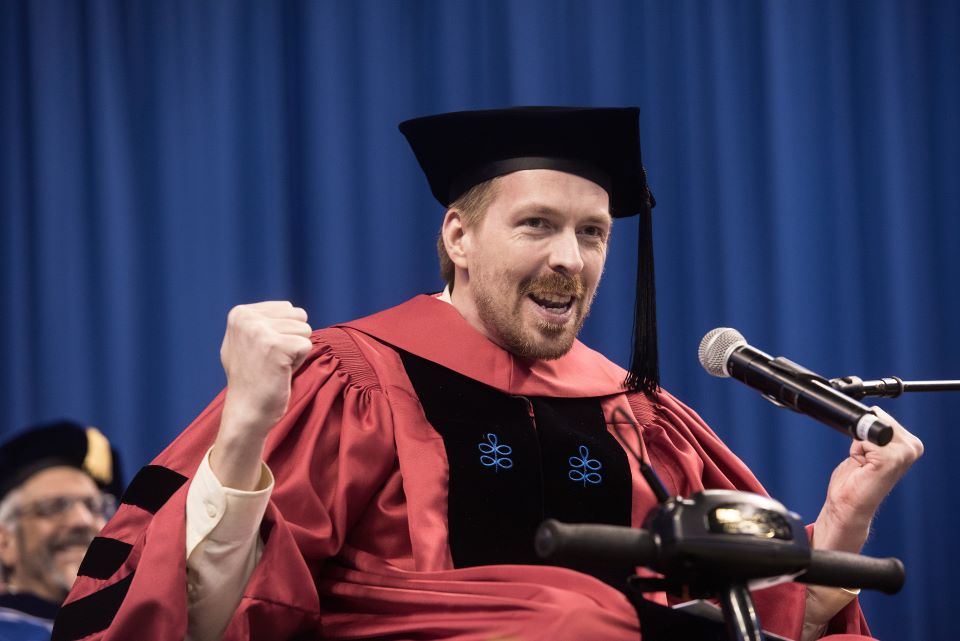 Paul Bracher, Ph.D., assistant professor of chemistry at SLU, addresses the crowd at the 2016 Midyear Commencement. Photo by Steve Dolan.

As the video made its rounds on social media, it was a blast from the past for one Saint Louis University professor. Paul Bracher, Ph.D., assistant professor of chemistry at SLU, tweeted an old blog post dubbing himself the original "accidental cat" when a producer with The New Yorker reached out to document his experience.

“Something like this happens in the news and all the bodies are dug up again,” Bracher said.

His feline experience occurred eight years earlier during a Skype interview for a job —  before the pandemic made virtual meetings the norm. His camera was working fine for a second, and then immediately his image changed to a kitten, its image forever ingrained on his cornea. He was mortified. It was like a sitcom episode except it was unscripted, he said. 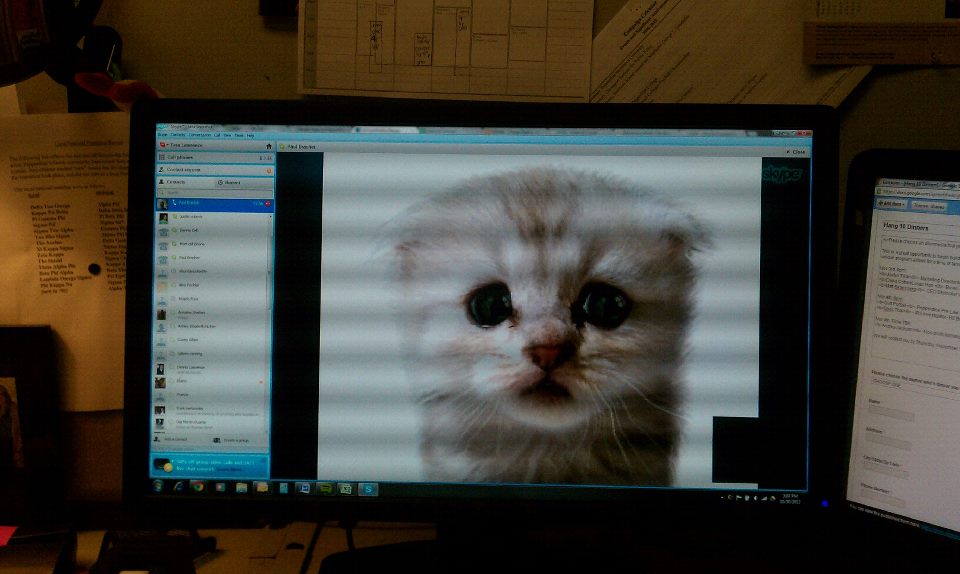 Bracher as he appeared during his Skype job interview. Submitted photo by Paul Bracher.

Bracher was pumped up for the interview. He had his talking points and 10 - to -15 minutes to make a good impression. He said those minutes were wasted doing the complete opposite. He had marketed himself as someone proficient with using technology, yet couldn’t figure out how to use his personal computer to Skype.

When he saw the infamous Lawyer Cat video, he laughed and was surprised people were still having these experiences after so many years. After his incident, he discovered that it was not an issue with Skype, but a default feature in Dell’s webcam settings.

“You figure that once people reported problems with it, Dell would fix that default,” Bracher said. “I guess this person just had an old laptop and got caught up in the same issue that I had.”

Most people who have had this situation haven’t had it occur under high-stakes conditions like a job interview or presenting an argument in court, he said. These are situations where you want to be as professional as possible. Appearing as a kitten was unprofessional and ultimately may have cost him the job, he mused.

For SLU graduates preparing to enter the workforce, Bracher offers the following tips and advice. Be prepared. Test your technology ahead of time. Make a list of talking points. Smile. And if you happen to show up as a kitten, he said “roll with it.”

“The show must go on,” Bracher said. “There are more unsettling things in life than appearing as a kitten on a job interview.”

And know that all things work out as they should, he said. Like a cat, Bracher licked his wounds and carried on eventually landing on his feet at SLU.

“You never know how any individual event is going to affect your trajectory,” Bracher said. “If that other interview had gone well, I might be living in Oregon instead of Missouri.”