Anne Sescleifer, a fourth-year medical student at Saint Louis University School of Medicine, participated in the filming of “1001 Cuts,” a documentary about women surgeons. 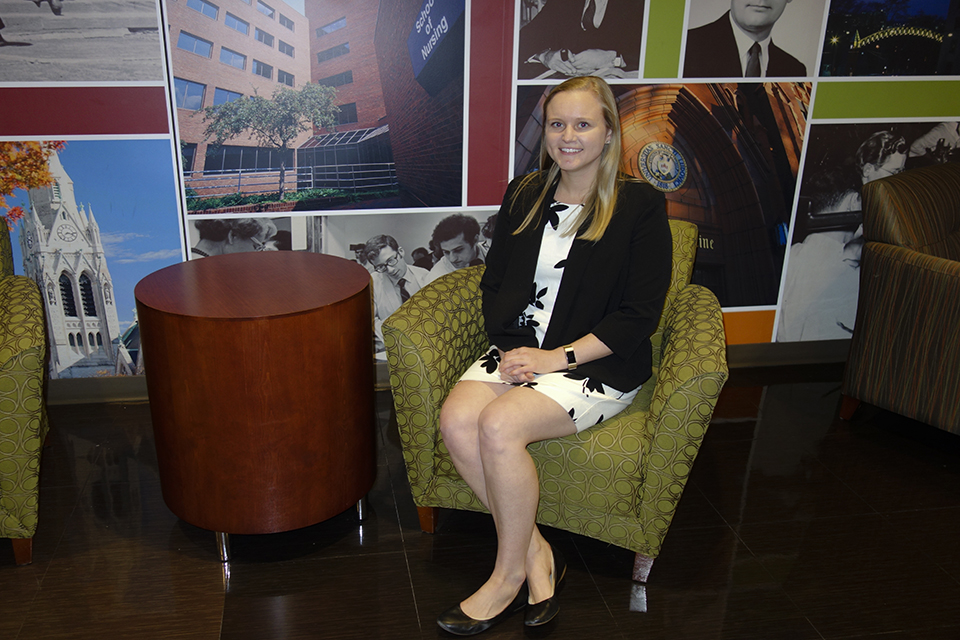 The film looks at the effects of gender discrimination in operating rooms and looks towards a fair and healthy surgical environment in the future. Per the film’s web site, the documentary aims to “improve the surgical care patients receive through telling the story of the operating room through the eyes of women surgeons.”

Sescleifer got involved in the project through the Jason Keune, M.D., a associate professor of surgery at SLU and executive director of the Bander Center for Medical Business Ethics.

“Dr. Sarah Temkin, the creator of the film, spoke at a Bander Center event last fall about gender equality in medicine, and was interested in including female medical students in the documentary to show the hope for change in our generation,” Sescleifer said. “My experience as a female medical student in surgery now is vastly different (for the better) than the experiences of my female mentors, even if they trained just 10 or 20 years ago.”

Sescleifer said while she was nervous, she felt the topic was too consequential to not participate.

“I think it is important to share the positive changes that have been made in recent years to make surgery more inclusive for females,” she said. “Filming was an opportunity to reflect on experiences that few male colleagues have shared, like being called a nurse when I walk into a patient’s room, but also made me so grateful for the boundless opportunities I have been given over my time at SLU. I have had countless mentors invest in me, and it has made all the difference.”

Sescleifer said she realizes how much SLU has shaped her development during her time here.

“Beyond the standard clinical experiences, SLU has allowed me the opportunity to assume leadership positions, serve on the hospital ethics committees, pursue research experiences and give back to my local community,” she said. “SLU has made me a more well-rounded person, and I believe my experiences will make me a stronger leader, more compassionate provider, and better informed physician as I begin my professional career.”

“One of the effects of the parasite was hydrocele, which is a surgically-correctable condition, and we had teams of urologists come down to operate on severely symptomatic patients,” she said. “On one occasion, I was asked to assist in the operating room, as they were short-staffed. Despite the frequent interruptions in electricity, I felt a compelling draw to surgery, and knew it was my vocation.”

SLU stood out to Sescleifer because of the University’s emphasis on community service and student wellness. A conversation during the medical school application process with Fred Rottnek, M.D., professor of family and community medicine, about SLU’s Jesuit values and community impact sealed the deal, she said.

“I knew from the time I entered medical school that I wanted to do surgery, and I worked on numerous research projects in the plastic surgery and pediatric surgery departments to gain more exposure to the fields,” she said.

In 2019, Sescleifer received two awards at the national Alpha Omega Alpha Honor Medical Society medical student research forum. She was awarded the Byron Bailey Award for Research Excellence, as well as the Best Overall Oral Presentation award for her project “Hearing Hypernasality: Online Crowdsourcing of Cleft Speech,” which focused on the shortage of therapists in treating cleft, which is usually addressed using a combination of surgery and speech therapy.

Having strong mentors has guided Sescleifer from the beginning of her career at SLU, starting when she met pediatric surgeon Colleen Fitzpatrick at a Women in Medicine cocktail hour during first-year orientation week.

“She answered my endless questions about surgery and invited me to shadow her in the OR that night,” Sescleifer said. “She has remained a mentor to me to this day.”

Sescleifer said she has been fortunate to have broad support at SLU and mentors who encouraged her to reach her full potential and to continue to challenge herself.

“One of my favorite experiences at SLU was a busy day on the transplant service – we started with a liver transplant, which lasted 11 hours, and then had two kidney transplants to follow. I ended up in the OR at 4 a.m., halfway through our second kidney transplant, and realized that although I had been at the hospital for nearly 24 hours, I felt wide awake,” she said. “For me, that moment confirmed that surgery was the right career path for me. Although there may be difficult cases and long days, I could not imagine myself doing anything else with my life.”

A trailer for “1001 Cuts” is slated to come out in the next few weeks. A formal release date has not been set yet, but Sescleifer is already preparing for her next role. She recently matched into a residency program at the University of Maryland.

“I am absolutely thrilled to be spending the next seven years in surgical training in Baltimore,” she said. “I chose the University of Maryland for its academic program with integrated research years. As an aspiring pediatric surgeon, it is a dream program for me, as three of SLU’s pediatric surgeons trained there (Yosef Greenspon, Shin Miyata and Dr. Cappiello – who has since completed his fellowship and moved back to the Baltimore area). The supportive culture of the program was also a key deciding factor, since I’ll have to spend more time with my co-residents than my family during training.”