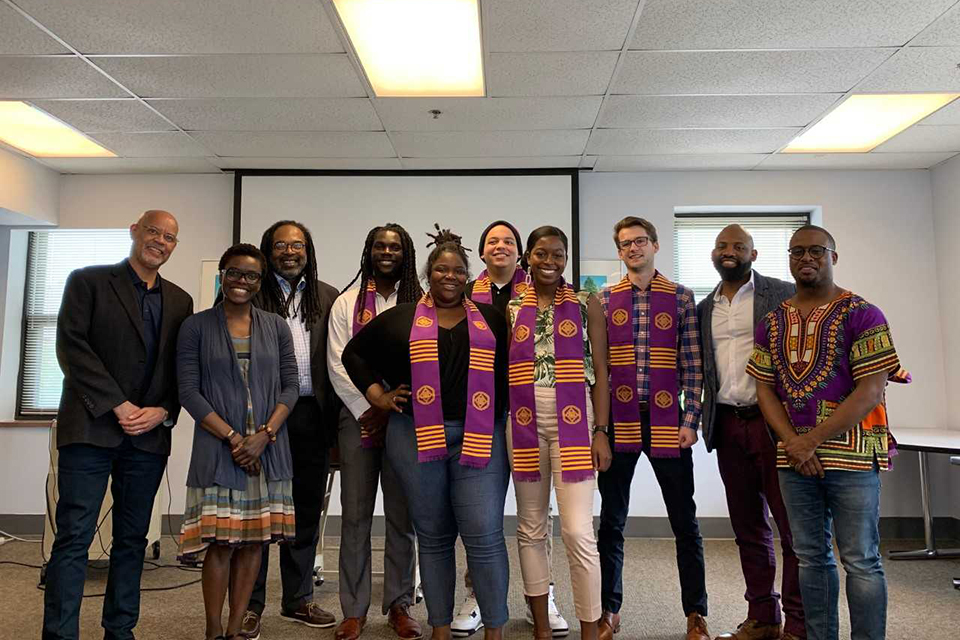 Faculty and students  in SLU's African American Studies Program pose for a photo. The program is being elevated to full departmental status this fall. File photo

“I think this moment speaks to the seriousness of the University’s approach toward intellectual production of the African diaspora, and will help our faculty and students contribute to the intellectual and social aspects of Saint Louis University,” said the program’s director Christopher Tinson, Ph.D., who will become the new department’s first chair.

Elevating the program to an academic department was supported at all levels of the University, including faculty and student representatives from across the institution; senior administrative and academic leaders; and SLU’s Board of Trustees, which ultimately has approval authority for new academic departments and programs.

“I want to congratulate all the faculty that have been instrumental in bringing this to fruition, and I want to thank Dr. Tinson, who since his arrival in 2018 has been steadfast in working toward department status,” said University Provost Michael Lewis, Ph.D.

“This move to department status brings with it a number of opportunities, and I look forward to seeing the incredible work of this group of faculty and students becoming an even more integral part of SLU in the coming years.”

In addition to greater visibility on campus and additional resources to support teaching, scholarship and service, academic departments also have more autonomy to hire their own faculty, grant tenure, set curricula and establish graduate-level programs.

“It also affords us the opportunity to play a more active role in the educational needs of the greater St. Louis region,” Tinson said, “partnering with local schools and colleges, and delivering region-wide programming that extends beyond our campus for years and decades to come.”

The University began offering courses in African American Studies in the early 1970s under the direction of the late professor Barbara Woods, Ph.D., who led the program for more than 20 years and is considered a pioneer in the field.

“I have had the great fortune to work for every chair and director of African American Studies at Saint Louis University,” said Jonathan Smith, Ph.D., an assistant professor of African American Studies and SLU’s vice president for diversity and community engagement. “I am humbled. And I honor and respect and love the work that each of them did to bring this department into being from program to the current moment.”

The Department for African American Studies will continue to be housed in SLU’s College of Arts and Sciences. It also will remain interdisciplinary in nature, with many of its course offerings cross-listed with other academic departments at the University, including English, History, Psychology and Health Care Ethics.