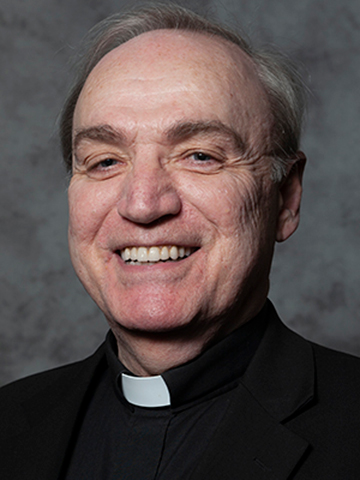 "Father Stark was a strong voice for our Catholic, Jesuit identity, mission and values who advanced our University with compassion and a collaborative spirit," said University President Fred. P. Pestello, Ph.D., in a message to the SLU community.

Father Stark was born on Aug. 4, 1947, in Kansas City, Kansas, and grew up in Washington, Illinois, near Peoria. He earned a bachelor of science in education/language arts at Kansas University in 1970. That same year, he converted to Roman Catholicism.

After graduating from KU, he taught at a public school in Kansas City, Kansas, and worked for three years in various programs that supported children with disabilities and behavioral concerns.

Father Stark entered the Society of Jesus in 1977 and pronounced first vows two years later. He was ordained to the priesthood in June 1985, at St. Francis Xavier College Church. He completed his theology studies at Regis College in Toronto, Ontario, where he earned a master’s of divinity degree in 1985.

He taught at St. Louis University High School from 1986-87 and Rockhurst High School in Kansas City, Mo., from 1987-1993. He then served for a year in Rome at the Pontifical Gregorian University.

Father Stark joined SLU in 1994 as a campus minister, overseeing the Rite of Christian Initiation of Adults (RCIA) program, among other duties. He served as the University’s vice president for student development from 1996-1999, followed by a year working in student development on SLU’s Madrid campus.

After holding several administrative posts at Wheeling Jesuit University in West Virginia, he returned to SLU in 2008 to join the advancement division, where he served as assistant vice president for alumni relations and annual giving.

In 2011, he was appointed SLU’s vice president for mission and identity. His collaborative efforts with campus stakeholders resulted in many successes for the University, including the establishment of the SLU Student Emergency Relief Fund and the formation of the Faith and Justice Collaborative, among many other accomplishments.

In his role as SLU’s vice president for mission and identity, Father Stark was noted for promoting interfaith dialogue on campus and in the greater community. In 2014, the Jewish Community Relations Council (JCRC) honored him with the Norman A. Stack Community Relations Award, which recognizes leaders in St. Louis who have made significant contributions to interfaith understanding, intergroup relations and social justice.

Father Stark retired from SLU in 2015. After a yearlong sabbatical, he returned to Peoria, Illinois, to serve as the parish priest and parochial vicar at St. Thomas the Apostle Catholic Church, a position he held until October 2021.

Father Stark is survived by his mother, Shirlee Ann Stark, and brothers, Terrence and David Stark.

Memorial gifts may be made to the USA Central and Southern Province of the Society of Jesus at 4511 West Pine Blvd., St. Louis, Mo., 63108, or through the Province website. 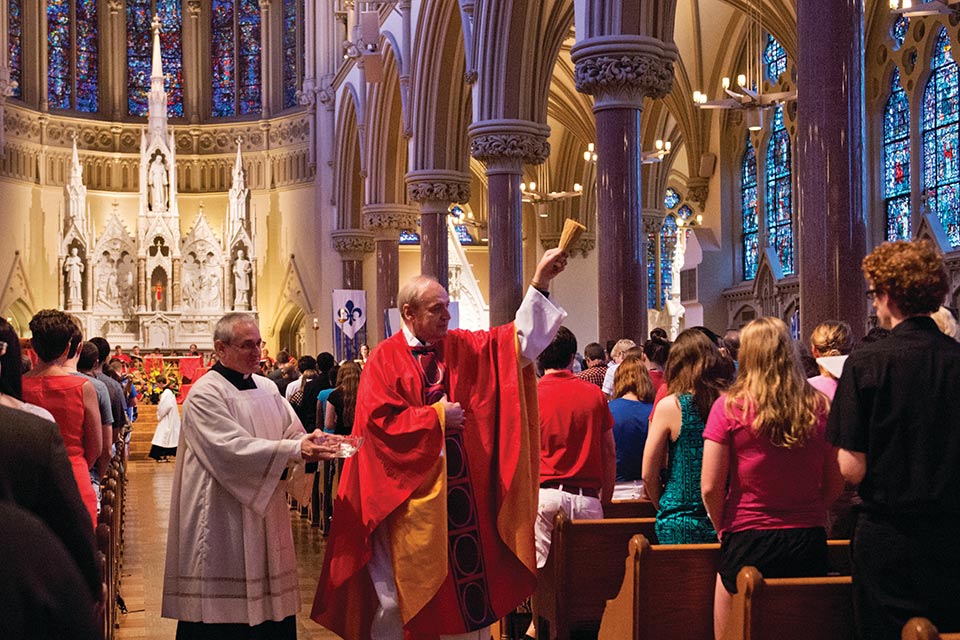 Paul Stark, S.J., offers worshippers a blessing with holy water during the Mass of the Holy Spirit in St. Francis Xavier College Church on Aug. 29, 2013. File photo by Michelle Peltier.