St. Louis real estate company Pier Property Group (PPG) has announced that it has signed a lease with Minneapolis-based Target Corp. for a 70,000-square-foot store that will sit along Grand Boulevard between Gratiot and Papin Streets, near the Saint Louis University campus. 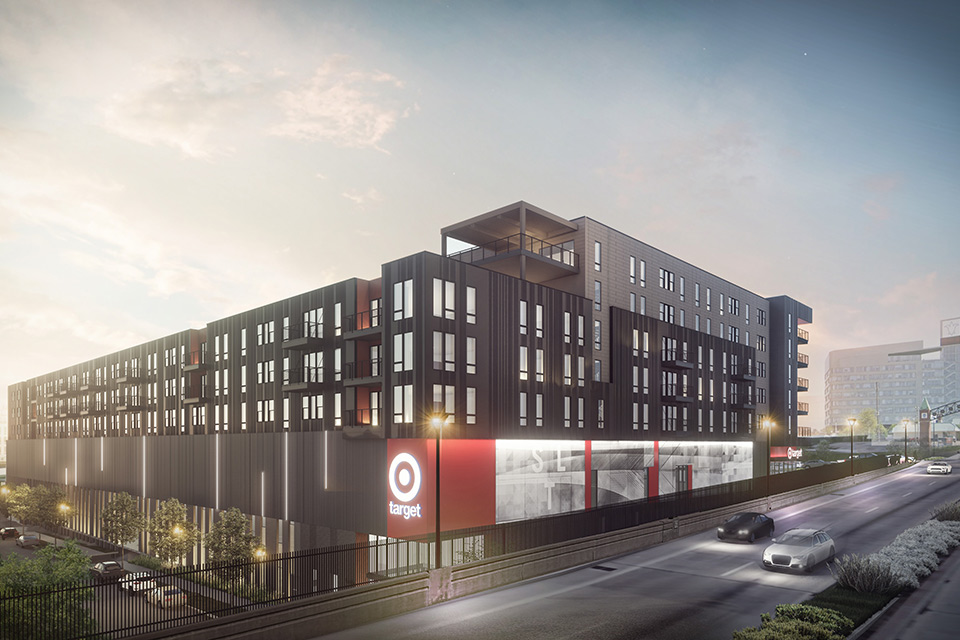 An artist’s rendering of The Edwin, which will sit along Grand Boulevard north of the Doisy Research Center between Gratiot and Papin Streets. The $60 million project includes a 70,000-square-foot Target store.

The new Target will anchor a $60 million mixed-use development dubbed “The Edwin,” which also will include 196 luxury apartments. The project is located within the 400-acre redevelopment area that’s guided by the St. Louis Midtown Redevelopment Corp. (SLMRC), a joint effort of SLU and SSM Health.

“When we decided to become the area’s master redeveloper five years ago, this project is exactly the type of transformational effort that we envisioned,” said SLU CFO and President of the SLMRC Board of Directors David Heimburger. “Attracting a stellar brand like Target to Midtown has long been a dream of ours and is further proof that this is a place where people want to be. We’re eager to continue working with our neighbors and community partners to keep this momentum going and to plan for the next big leap forward in the revitalization of the area.”

The Edwin development is the latest phase of PPG’s Steelcote Square District, a more than $100 million investment in the area that also includes the Steelcote Lofts, Steelcote Crossing and Mill Creek Flats.

“We are overwhelmed with excitement to deliver this kind of tenant to Midtown,” said PPG owner Michael Hamburg. “Making this project feasible and enabling a group as meaningful as Target to be part of this area was a collaborative effort among Saint Louis University, the City of St. Louis, the St. Louis Midtown Redevelopment Corp. and the entire design team that has been working on this for several months. Providing a walkable and urban experience for SLU students and city residents from this neighborhood and beyond with nearby transit centers continues to move the needle for our city in sustaining growth and demand.”

This will be Target’s first “small-format” urban store in the St. Louis market, filling a void of anchor retail tenants along the Grand corridor. The retailer announced in March that it’s accelerating efforts to open more small-format stores to meet community needs for urban centers, dense suburban cities and college campuses.

“It is a tremendous endorsement of our redevelopment efforts with Michael Hamburg and others that Target is adding a Midtown St. Louis store to the growing list of neighborhood Target stores opening in cities like Los Angeles, Denver, Portland and New York City,” said SLU President Fred P. Pestello, Ph.D. “Each of these stores focuses on the unique shopping needs of the surrounding neighborhoods. Target’s Grand Boulevard store, located between our north and south campuses, will provide convenient shopping, serving the special needs of SLU students, staff and faculty, as well as our St. Louis neighbors.”

The Edwin/Target announcement comes on the heels of $1 billion in projects underway or already constructed since the St. Louis Midtown Redevelopment Corp was formed.

“We are excited for our 19th Ward community and the City of St. Louis to have additional retail, jobs and services,” said 19th Ward Alderwoman Marlene Davis.

St. Louis Development Corp. Executive Director Neal Richardson agreed, adding: “This project will advance inclusive growth in our region through the creation of living-wage jobs and providing accessible housing for residents to achieve upward economic mobility. This is a big win for the City of St. Louis.”

St. Louis-based design firm Arcturis and general contractor Holland Construction have been tapped for the project, which also includes a more than 200-space parking garage and a 140-space surface lot. Demolition and site work are expected to begin by the end of November, and construction is slated to take approximately 20 months. 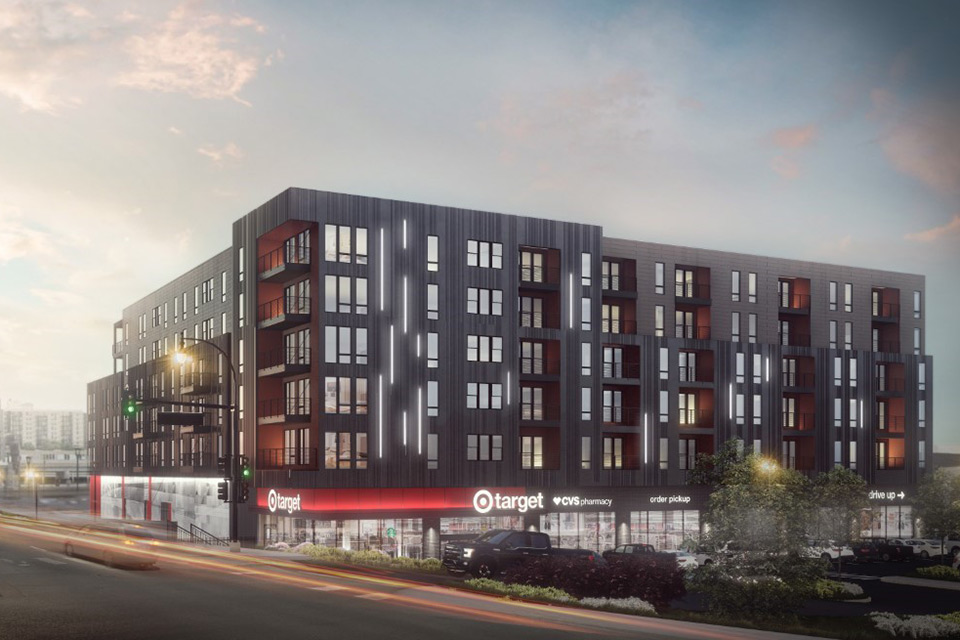 Another view of The Edwin and the new Midtown Target. Artist's rendering.