Seven years after Occupy SLU, the Office of Diversity and Innovative Community Engagement (DICE) commemorated the historic encampment at the clock tower with a series of events to remember the 2014 protests for equality and justice that took place on the SLU campus and in the surrounding St. Louis area. 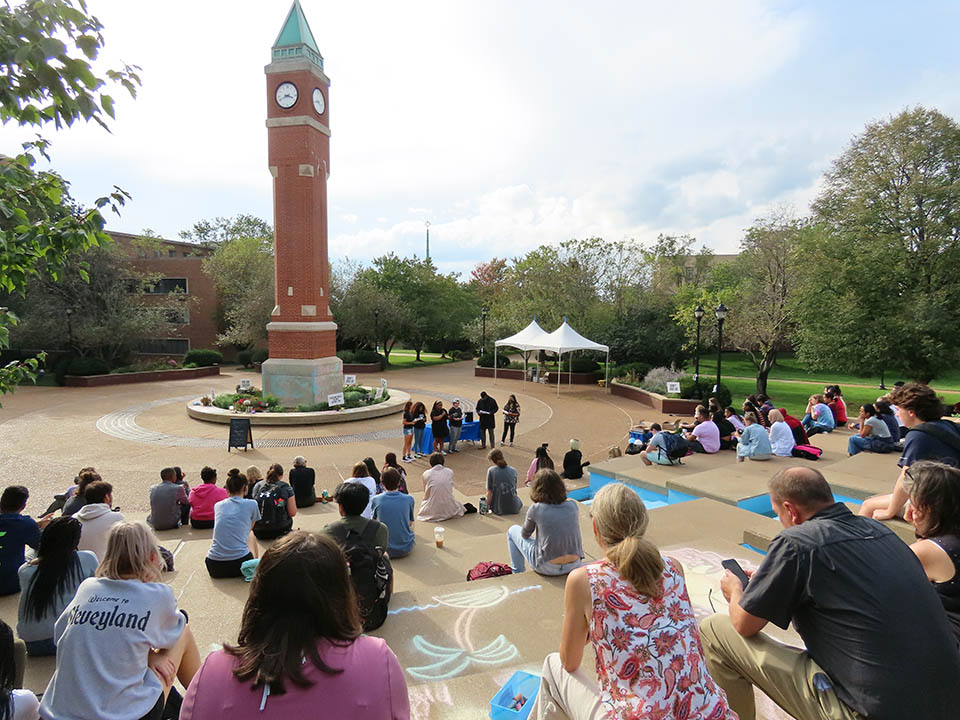 During an Occupy SLU Week event on Wednesday, Oct. 13, a group of SLU students read the names and shared the stories of black people killed by police officers. Photo by Joe Barker.

“We are very pleased with the outcomes of this week,” said Amber Johnson, Ph.D., interim vice president for diversity and community engagement. “Events were well attended, attendees were engaged and ideas were birthed.”

On Monday, Oct. 11, activists Jamell Spann and Brittany Ferrell met with students. Moved inside the Center for Global Citizenship because of rain, Spann and Ferrell hosted a session on activism and organizing. The event was intended to teach the basics of how to be an activist.

Monday also featured an online, interactive drama set against backdrops like #MeToo and the death of George Floyd and the ensuing mass protests across the globe for racial justice. The event was held on Zoom.

Clear skies on Tuesday brought the Occupy SLU Week events back outside. The first event featured readings of speeches by Dr. Martin Luther King Jr. Richard Marks, Ed.D., director of the Cross Cultural Center for Global Citizenship (CCCGC), continued the University’s tradition of reading the speech King gave on the SLU campus in October 1964.  Other speakers read excerpts of other King speeches that still resonate today.

Later Tuesday, Rabbi Susan Talve and Jeffrey Dhoruba Hill shared their experiences with Occupy SLU and the 2014 protests. Talve talked about how her synagogue took in protesters looking for a safe place. Hill shared his experience as one of the organizers of the Occupy SLU protest.

Wednesday was a return to the Lipic Clock Tower Plaza for “Say Their Names.” SLU students read the names and circumstances surrounding black people who have been killed by police. 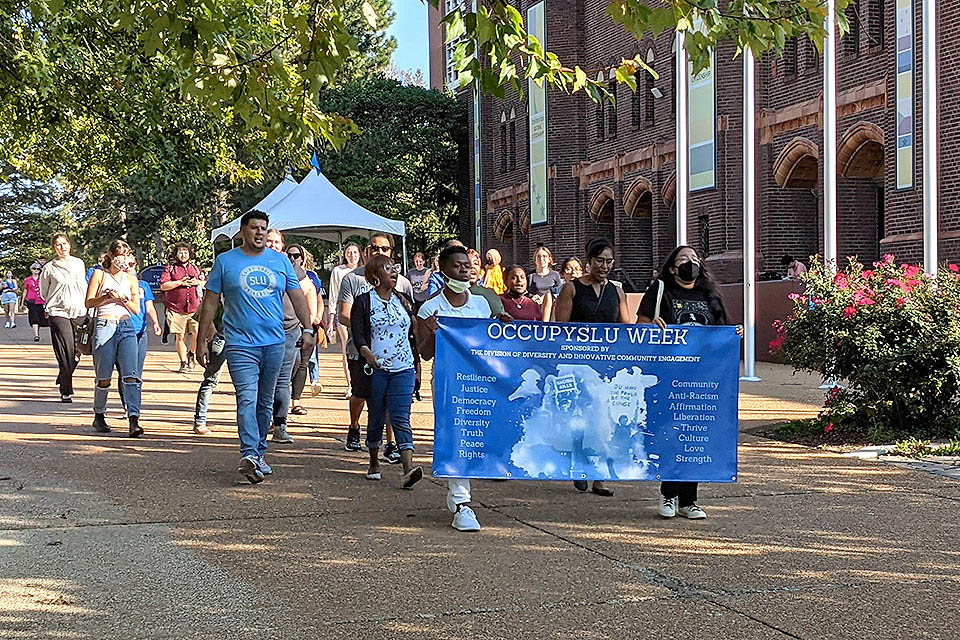 Occupy SLU week kicked off Friday, Oct. 8, with a procession through campus in memory of VonDerritt Myers Jr. Photo by Clayton Berry.

Wednesday evening featured a performance in the CGC auditorium of "Still With Us: Dr. Jonathan Smith's 'Do I Move you?'" Based on the work of the late Dr. Jonathan Smith, "Do I Move You?" is a collection of poetry, music and dance performed by the Black Repertory Company.

“We were very intentional about celebrating Jonathan Smith's legacy and ensuring that his vision sprang to life,” Johnson said. “You can see sprinkles of his energy and spirit throughout the programming.”

More rain on Thursday brought events back inside. Jonathan Pulphus, a student at SLU during Occupy SLU and a current St. Louis Peace Program Associate, shared with the crowd inside the CGC his story and remembrances of the 2014 protest.

Johnson said bringing back activists who were part of the original protest helped tell the story to a new audience.

“Dhoruba, Rabbi Talve, Jonathan Pulphus, Brittany Ferrell and Jamell Spann were our guests this year and each of them was on the ground during OccupySLU,” Johnson said. “They were such a rich addition to the program and made beautiful contributions. I am honored they agreed to be here with us and share their experiences and feelings. They were each wonderful.”

Occupy SLU Week closed Friday evening with a viewing of the documentary “Whose Streets.” The documentary is about how the killing of Michael Brown brought a community together and sparked a global movement.

Occupy SLU was bigger than ever and that was on purpose, Johnson said.

“We have a much bigger team — 12 people plus campus ministry helped organize this year's events,” Johnson said. “That made a huge difference in terms of imagination, spreading the workload, and getting things done. We also had a great collaborator in Marcom (University marketing and communications). They helped spread the word and were very willing to use their resources to make our events a success.

"I want to thank the Division for Diversity and Innovative Community Engagement, Campus Ministry, and Marcom for their generous support and hard work.

"This week was magical because of everyone involved.”