Blackwell was born July 31, 1929, in Cleveland, Ohio. He obtained his bachelor’s degree from John Carroll University and his masters and doctorate in philosophy from Saint Louis University. He taught at his alma mater in Cleveland for six years before joining the SLU faculty in 1961 as an associate professor of philosophy.

He served in that role until 1986 when he was named the first Danforth Chair in the Humanities. 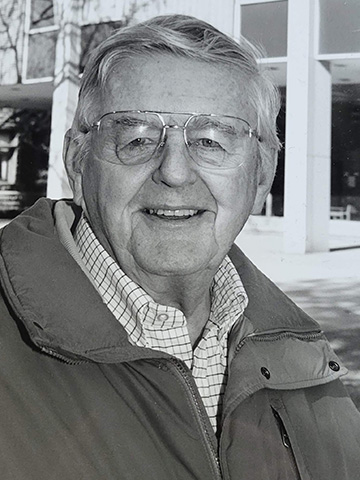 Blackwell’s special field of study was the philosophy and history of science and the intersection between science and religion. He published numerous articles and books, including translations of works by St. Thomas Aquinas and Christian Wolff, while at SLU.

“Dick Blackwell was an important senior member of the Department as it transitioned from its former Golden Age to its present era,” said Theodore R. Vitali, C.P., Ph.D., a longtime faculty member in the Department of Philosophy. “He was a publishing scholar in the field of the history of the philosophy of science and it was imperative at that time that we had publishing scholars. Our graduate program required such scholarly work. Dick provided that. Thus he was critical for the successful transition from the Golden Era to the present era. We owe Dick a great deal.”

Blackwell retired from SLU in 2001.

In 1979 he won the Nancy McNair Ring Outstanding Faculty Award. The award recognizes student-teacher relations rather than strictly academic credentials.

“Dr. Blackwell is admired by students past and present for his total support of all aspects of the university life,” said SLU student Jerry Dwyer in 1979 when the award was announced. “He is dedicated to the students and to the University, and I believe he is very deserving of the award.”

A funeral Mass will be Friday, Oct. 15, 2021, at 10 a.m. at St. Justin Martyr Catholic Church. Interment will be at Resurrection Catholic Cemetery. In lieu of flowers, memorial contributions may be made to Saint Louis University.