Saint Louis University, in partnership with the Association of Jesuit Colleges and Universities, has committed to working with Congress and the Biden administration to double the maximum Pell grant. 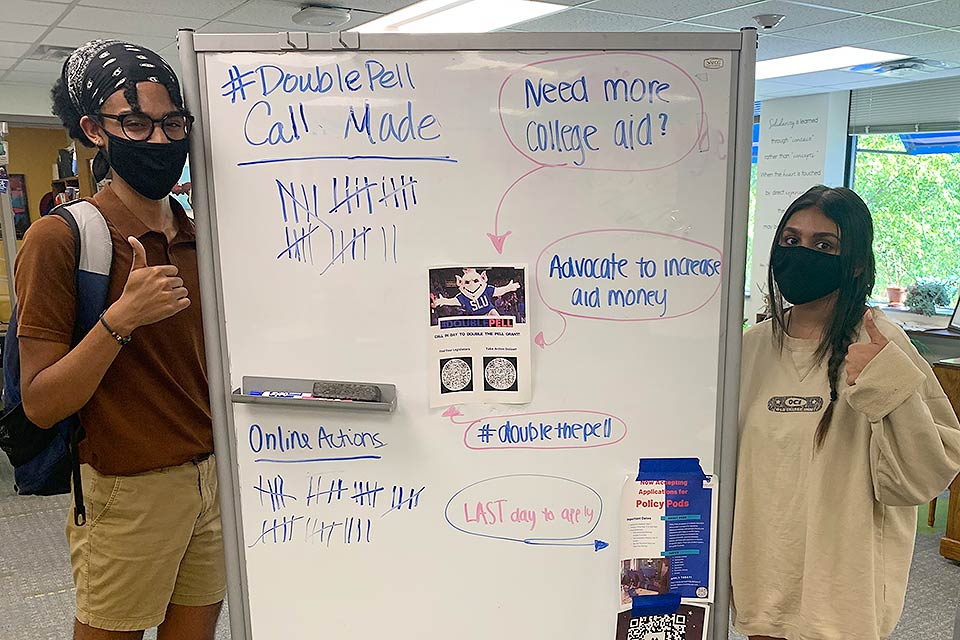 SLU students Antron Reid and Anushah Sajwani pose for a photo during a recent advocacy day when students volunteered to call and send messages to their elected members of Congress urging them to double funding for the Pell Grant program. Submitted photo.

#DoublePell is a national campaign led by the Double Pell Alliance, a coalition of nearly 1,200 higher education organizations that are committed to doubling the maximum Pell Grant from $6,495 to $13,000 by the 50th anniversary of the creation of the program next June.

Kathleen Davis, SLU’s vice president for enrollment and retention management, sent a message to students on Monday encouraging them to learn more about the nationwide effort and to lend their voices to the cause. In the last academic year, approximately 1,580 SLU students received Pell grants, totaling more than $6.8 million.

“The Pell Grant provides educational funding to students who need it most,” Davis said in her letter. “Doubling Pell will increase access for eligible students and families. It will help to make higher education more affordable, reduce student debt, and help more students remain in school.”

“Saint Louis University strongly supports this initiative, which is at the heart of our mission,” she continued. “We encourage you to add your voice to this important conversation.”

The Pell Grant is a form of need-based federal financial aid that typically does not have to be repaid to help eligible low-income students pay for college costs, including tuition, fees, room and board, and other expenses. To apply, students must complete the Free Application for Federal Student Aid (FAFSA).

Created in 1972, the Pell Grant is named after U.S. Sen. Claiborne Pell of Rhode Island, who was the chief sponsor of the program. It was originally known as the Basic Educational Opportunity Grant. Today, it is the largest grant program offered by the U.S. Department of Education to undergraduate students.

In March, the coalition sent a letter to Congress urging lawmakers to double the Pell Grant. While the program helps nearly 7 million low- and moderate-income students attend and complete college annually, the coalition noted that the share of college costs covered by the grant is at an all-time low.