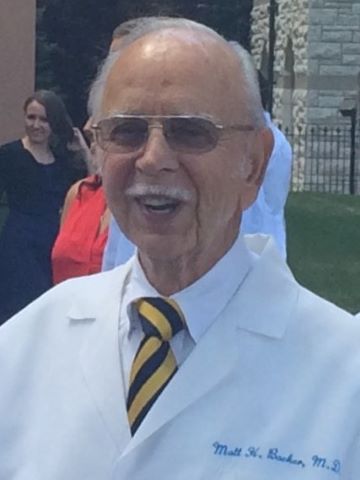 “Dr. Backer was engaged in our department his entire life,” said Mary McLennan, M.D., professor of urogynecology and chair of the Department of Obstetrics, Gynecology and Women’s Health at SLU. “Even after he retired, he would continue to teach forceps and vaginal surgery lectures, and attend grand rounds and our maternal mortality conferences every Friday. He did that until this past summer.”

“As a previous colleague and the chairperson to follow in Dr. Backer’s role as chairperson of the department, I was very saddened to learn about his passing,” said Raul Artal, M.D., professor emeritus of maternal fetal medicine. “Dr. Backer should be remembered as the Department's leader during a period of transition and many challenges. His enthusiasm and dedication to the department, to his patients and to the institution were remarkable.”

McLennan said she is here at SLU today because Backer gave her a chance.

“He gave me an intern position outside the standard match and is responsible for me being where I am today,” McLennan said. “He also taught me my first vaginal procedure and got me interested in surgery and led me to pursue a fellowship in urogynecology. I would not be where I am today without him and I am eternally grateful.”

She noted his sense of humor was a part of his work. “He was an amazing vaginal surgeon and would say that gynecologists who operated vaginally were ‘vaginal Picassos,’” she said.

McLennan said Backer was devoted to teaching throughout his life.

“He was a retired Rear Admiral in the Navy,” she said. “After he retired he would share time between here and San Diego and would engage in teaching residents while he was at the various sites.”

Backer taught and recruited more than 400 men and women to become Navy doctors.

“His wisdom and his dedication to teaching will be missed,” McLennan said.

Gifts may be made to SLU’s Department of Obstetrics, Gynecology and Women’s Health.