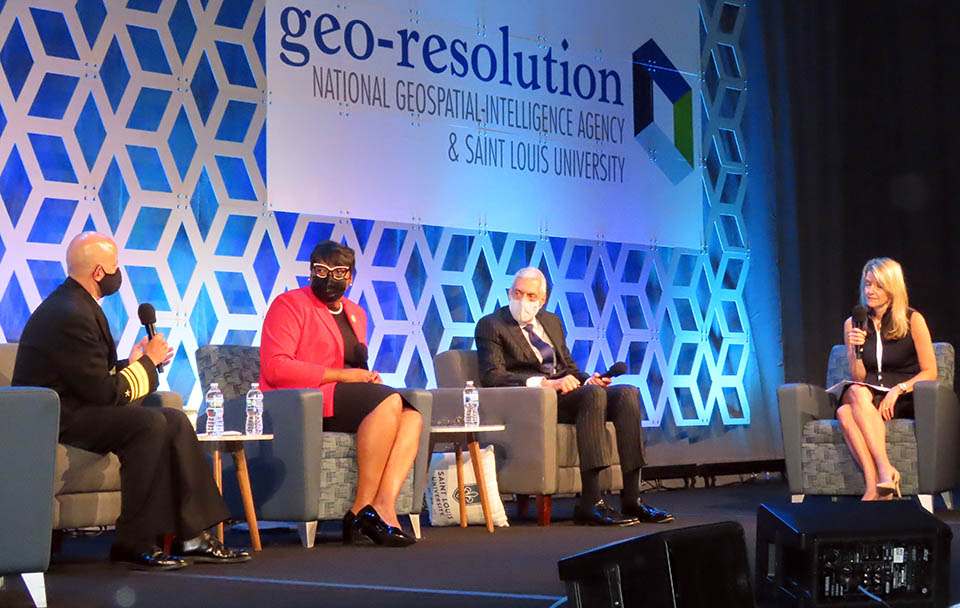 Geo-Resolution 2021: Building a 21st Century Geospatial Ecosystem From Hard Problems to Opportunities was co-hosted by Saint Louis University and the National Geospatial Agency (NGA). The conference returned to the Wool Ballrooms at Busch Student Center on SLU campus after the event was hosted virtually last year. While in person, the event also was streamed live online for virtual attendees.

The annual event is intended to encourage collaboration between government, academia and industry to grow the geospatial ecosystem in the greater St. Louis region. Geospatial science touches on fields that include artificial intelligence, biosecurity, health, education, environment, food security and economic development.

The trio fielded questions about the state of the geospatial ecosystem.

Sharp explained the evolutionary aspect is based on facing the challenge of competition. He said there are competitors out there with better geospatial intelligence and the goal is to close that gap — that's where the revolutionary side comes in. Sharp said with new technologies, there's more to learn and more to gain.

One of the big developments Sharp mentioned was the construction of the new NGA campus in north St. Louis. Sharp said it's part of the bigger picture of St. Louis as a geospatial center.

"The investment St. Louis is making in establishing themselves as the geospatial hub of the nation — I've heard terms thrown around calling it Silicon Prairie — we've talked about it the last couple of years, it's really exciting to see how it's starting to take shape, how partnerships are being formed and strengthened," Sharp said.

Some of those partnerships have been with local universities, including SLU and Harris-Stowe.

"At Saint Louis University, we're all in on this," Pestello said.

With the new NGA campus in St. Louis and other geospatial growth in the region, Pestello said SLU has focused on the field.

"It's an opportunity we can't pass up," he said. "Here at SLU, we're leveraging that. We're leveraging it through our Geospatial Institute. Basically it comes down to education, research, data and industry partners. We've created bachelor's, master's and doctoral programs so that we're training the next generation of leaders."

"We're very excited to be a partner in this adventure," Collins Smith said. "Harris-Stowe is very interested in creating a diverse pipeline of the next geospatial leaders. We are very committed to under-resourced and under-prepared students and making sure that there is a space for them in geospatial."

Collins Smith said the NGA's future home has the chance to transform north St. Louis. She pointed out the low median income of the area and how better jobs could lead to a better community.

“We have the opportunity to change lives,” she said.

Sharp said the new NGA campus will hopefully inspire people around St. Louis to get involved in the geospatial industry, even at a young age.

"We're in competition," Sharp said. "We're in competition for our nation's best and brightest. I'm convinced that some of our nation's best and brightest are right here in St. Louis. It's one of the reasons we're excited about what we're building in north St. Louis. It's about making connections to the communities so that individuals start to understand what they can do in this realm, in this business area, and they start pursuing an education at an early age to use these tools and help solve complex problems that this area needs, that the nation needs and that the world needs."

“In traditional disciplines, you don’t necessarily have all the areas of expertise necessary to advance this, so what we’re seeing is new courses and new collaborations,” Pestello said. “Faculty across disciplinary lines are getting together to share expertise and break ground in new areas of investigation. And then new courses are developing.”

All three speakers touched on the impact of the COVID-19 pandemic on life in general and, more specifically, the geospatial industry. Pestello remarked that higher education had to adapt its entire mode of operations online. Sharp said the NGA had to pivot as well in order to stay safe.

“We have some more agility in how we meet some of those mission critical needs for our nation,” Sharp said.

Pestello said the burgeoning geospatial industry in St. Louis has created a wave of enthusiasm.

Following the moderating discussion, conference attendees took part in other panels. Featured speakers and panelists discussed the latest developments in the geospatial ecosystem. Topics included how geospatial science can solve some of the world’s most challenging problems, the importance of preparing the next generation of skilled workers and the ethical considerations surrounding an increasingly connected world.

The conference also featured breaks for networking, poster displays and a question and answer session for young students looking to break into the field.

NGA enables the U.S. intelligence community and the Department of Defense to fulfill the president’s national security priorities to protect the nation. For more information about NGA, visit us online at www.nga.mil, on Facebook or on Twitter.

Founded in 1818, Saint Louis University is one of the nation’s oldest and most prestigious Catholic institutions. Rooted in Jesuit values and its pioneering history as the first university west of the Mississippi River, SLU offers more than 12,000 students a rigorous, transformative education of the whole person.

At the core of the University’s diverse community of scholars is SLU’s service-focused mission, which challenges and prepares students to make the world a better, more just place. Saint Louis University is one of nine Catholic universities with a higher or highest research activity designation from the Carnegie Foundation.

From the construction of a new Interdisciplinary Science and Engineering (ISE) Building to its remote sensing lab, and demonstrated by the extraordinary work of faculty and students in geospatial fields and beyond, academic life on SLU’s campus is vibrant, leading edge and full of potential.