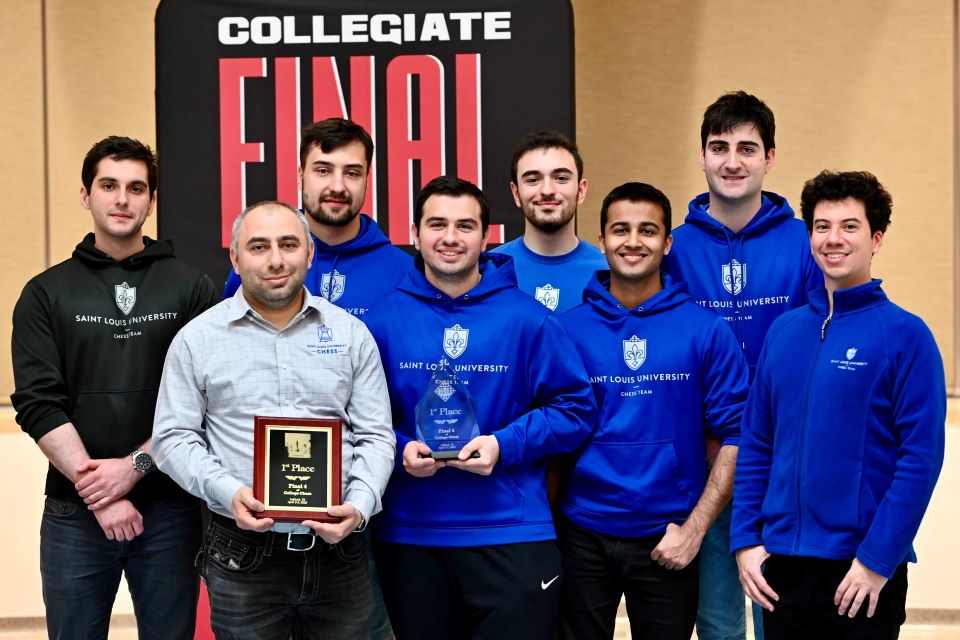 The Final Four of Collegiate Chess wrapped up Sunday, April 3, with the Billikens on top. Saint Louis University narrowly edged out Webster University to take home the President’s Cup.

SLU picked up 7.5 points during the tournament — just enough to edge Webster’s 7. Texas Tech University placed third with 5.5 points and University of Texas at Dallas rounded out the Final Four with four points.

“SLU is also the reigning FIDE World Rapid Champions and the Pan-American Intercontinental Champions,” Coach Alejandro Ramirez said. “We have won every event we can participate in — the National Champion feather was the last one we were missing on our cap. Now SLU is undoubtedly the No. 1 Chess University in the country.”

In this event, universities played a round robin system with 4 boards against 4 boards per round. Universities were allowed up to two alternates.

The tournament win came after SLU defeated UTD by a margin of 3.5-0.5 while drawing the matches against Texas Tech University and Webster by 2-2. The winner of the event was the university that scored the most board points.

SLU went into the last round with a slim 0.5 lead over Webster knowing that a 2-2 would guarantee a National Championship. A win by Theodorou against Webster's Benjamin Gledura offset Chandra's loss to Aram Hakobyan.

Boards one and four were drawn without problems and SLU was able to bring the President's Cup home.

“Special mention goes to Cemil Can Ali Marandi for scoring an impressive 2.5/3 points, and Dariusz Swiercz with 2.0/3,” Ramirez said. “ These two players have been with us since the program's inception in 2016 and are completing their Master's Degree in their final year of eligibility. After trying for many years, they were finally able to seal the deal in the Final Four.”

Established in the fall of 2016 as a partnership between SLU and the Chess Club and Scholastic Center of St. Louis, with support from SLU alumnus, University trustee and chess enthusiast Rex Sinquefield, the team is not just a club activity but rather a strategic effort by administrators and alumni to recruit promising players and build on the University's excellent academic reputation.

The team currently has 14 members and recruitment efforts continue through donor-sponsored competitive chess scholarships, which can include room and board, tuition and fees.